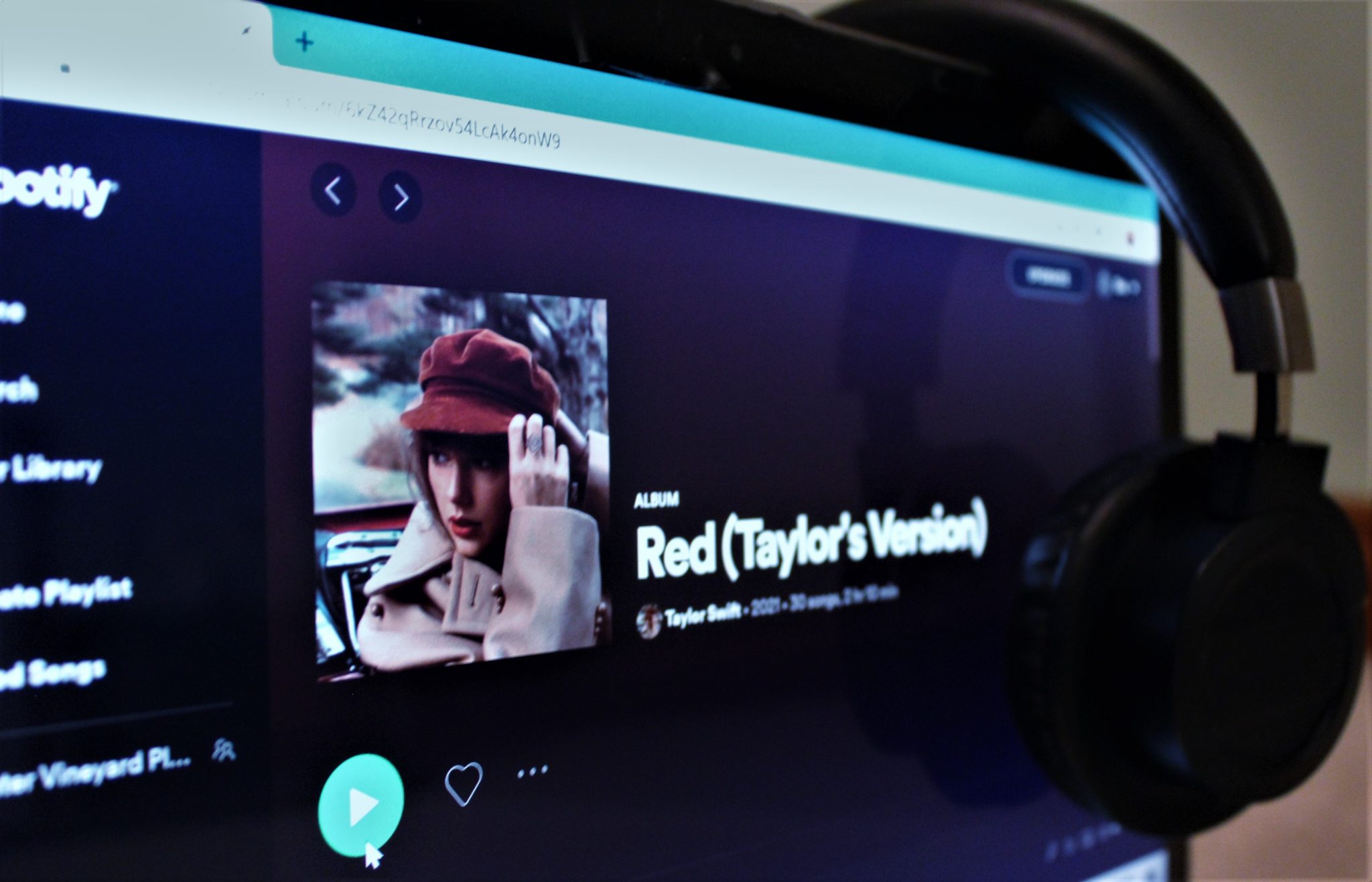 In the process of re-recording her entire catalogue in order to gain ownership over her masters, Taylor Swift recently topped the charts and broke records with the revisiting of her 2012 album, Red. Beyond just re-recording songs that made it onto the album’s original tracklist, Swift also added to Red (Taylor’ Version) what she refers to as songs “From the Vault” that were written for the original album but did not make it to release. Among these Vault tracks is the 10-minute uncut version of All Too Well, a song originally released as an edited-down 5-and-a-half-minute version that marked a great songwriting triumph for a then 21-year-old Swift. In Rolling Stone’s recently updated list of the 500 Greatest Songs of All Time, the original All Too Well landed a spot at #69, concurring with the general critical and public opinion that the song is her magnum opus.

Just this past Nov. 12, Red (Taylor’s Version) was released to the masses, and with it, All Too Well (10 Minute Version) (From the Vault) was released as the 30th and final track on the album. You’ve heard Rolling Stone and Pitchfork’s thoughts on the matter, but I know we’ve all been dying for me to also throw my two cents in, so here it is: Taylor Swift’s All Too Well (10 Minute Version) will be remembered as one of the finest breakup songs of all time.

Just this past week, All Too Well (10 Minute Version) (From the Vault) made history, with the track becoming the longest song to reach number one on the Billboard Hot 100 Chart, dethroning Don Mclean’s 8-and-a-half-minute American Pie which has held that impressive record since its 1971 release. Partially contributing to All Too Well (10 Minute Version)’s success is a short film written and directed by Swift herself that heightens the already vivid song with a stunningly heartbreaking visual to accompany it. With its already intense imagery and beloved reputation, the song hardly needed a short film to promote or enhance it (but it sure was nice to get one anyways).

All Too Well has always been a standout track from Swift’s catalogue, with the song quickly becoming a fan favourite and critics lauding it as one of her best. Like any well-written narrative, the genius of All Too Well lies in its ability to describe a universal experience through the lens of the painfully personal details Swift sprinkles throughout the track. One of the most iconic of these details, of course, is the infamous scarf which she recalls leaving at her ex-lover’s sister’s house, which that same ex still can’t seem to get rid of because it reminds him of innocence and it smells like her. These symbolic details made the original the absolute giant of a song that it was.

Such details are only now enhanced by the inclusion of more agonizingly specific additions to the song’s extended version, such as Swift’s recollection of  “weeping in a party bathroom” and how the man she loved once charmed her dad with self-effacing jokes before ultimately leaving her broken-hearted and alone while her father had to watch.

These additions provide a depth to the song that causes it to take on new meaning entirely; the ten-minute version might as well be a different song than its original five-minute predecessor. Where the original All Too Well is a bittersweet retrospective tale of a romance now long-gone, the ten-minute version is an accusatory narration damning the song’s subject for treating Swift so poorly and painting a vivid image of just how devastatingly painful this love affair and breakup was to her as a 21-year-old.

The newly released 10-minute version starts as the original does, reminiscing about wonderful moments from a time when Swift and her past lover were at their best (autumn leaves falling down like pieces into place as they drive upstate, Swift and her man dancing around the kitchen in the refrigerator light, his mother showing Swift childhood photos of her son on the tee-ball team); however, the song gradually transforms into a declaration of anger, pain, and sadness where those same cherished memories now shatter her to her very core. The new underlying message of the ten-minute version is essentially an emotionally destroyed young girl saying, “Look what you did to me. You ruined me. You did this.”

Swift reports that the original uncut song was born out of improvisation with her band one day at tour rehearsal while she was venting and trying to pull herself together from her recent breakup by ad-libbing lyrics. That stream-of-consciousness nature is on full display in the 10-minute version and is particularly evident in the song’s newly added third verse. It is here where Swift continues on from that iconic emotional peak in the first bridge (“You call me up again just to break me like a promise / so casually cruel in the name of being honest”), to a verse where she starts ranting in all her heartbroken glory, and then just keeps going and going… and going. The verse reads like a deeply personal, unfiltered journal entry that is so specific you feel like you physically watched this entire love story unfold and then crumble at the seams.

“You said if we had been closer in age maybe it would have been fine, and that made me want to die,” Swift cries out on that passionate verse, pointing out the age gap between her and her ex-lover, another detail which was never even touched upon in the original song. A large age disparity between the song’s two characters highlights a general sense of imbalance in their relationship, with a young Swift being more vulnerable, more in love, more committed, and inevitably, more heartbroken than her significant other when their love affair eventually comes to an end.

Certain lines make you wonder how Swift was ever able to even cut this song down to its original 5-and-a-half-minute length to begin with. An addition to the song’s second chorus comes to mind especially: “Because there we are again when nobody had to know / You kept me like a secret, but I kept you like an oath” hits like an emotional grenade. This line tells us everything we need to know about the dynamic of this particular relationship, while simultaneously verbalizing what so many of us have experienced in our own relationships as well – feeling like you were swept under the rug because you loved someone more than they loved you.

Over the course of the song, Swift brings to light that she isn’t the only one who can’t escape these memories. “I was there / I remember it all too well” morphs into “you were there / you remember it,” because, well, the dude she’s singing to was there, and he is plagued by the ghost of remembrance just as she is. As is the case in life, those profoundly intimate moments shared between two lovers cannot be so easily forgotten by either person no matter how things went down (hence why a certain someone still holds on to Taylor’s scarf, even now).

In the track’s final two minutes, Taylor hits us with perhaps the most heartbreaking question to ever be featured in a pop song: “And did the twin flame bruise paint you blue / Just between us did the love affair maim you too?” she asks desperately over a swirl of background vocals. This brings us to yet another paramount element of heartbreak: wondering if the relationship hurt the other person as badly as it hurt you. It seems that in her quest to write her pain away, Swift was able to capture all the cruel elements of the universal breakup experience while still telling an intensely personal story.

All Too Well (10 Minute Version) perfectly encapsulates what a breakup truly is: the mourning of one of the most important relationships in your life. And while mourning anyone or anything means being haunted by memories of the past, it also means we’re also haunted by the future we imagined with that person that never came to be.

Swift reached a profound songwriting peak back in 2012 when All Too Well was originally released yet managed to outdo herself on the extended 10-minute version of a passionate love affair that was doomed from the start. I have been a huge fan of Swift’s for the past decade (Red actually being the album that captivated me in the first place), so I may be biased, but Taylor Swift truly is in a league of her own when it comes to narrative songwriting in pop music, and All Too Well is a shining example of that. My only hopes for you are that you are able to listen and enjoy this extended version as much as I have, and that you never are in the position to relate to the level of heartbreak that was experienced for this song to be composed in the first place.