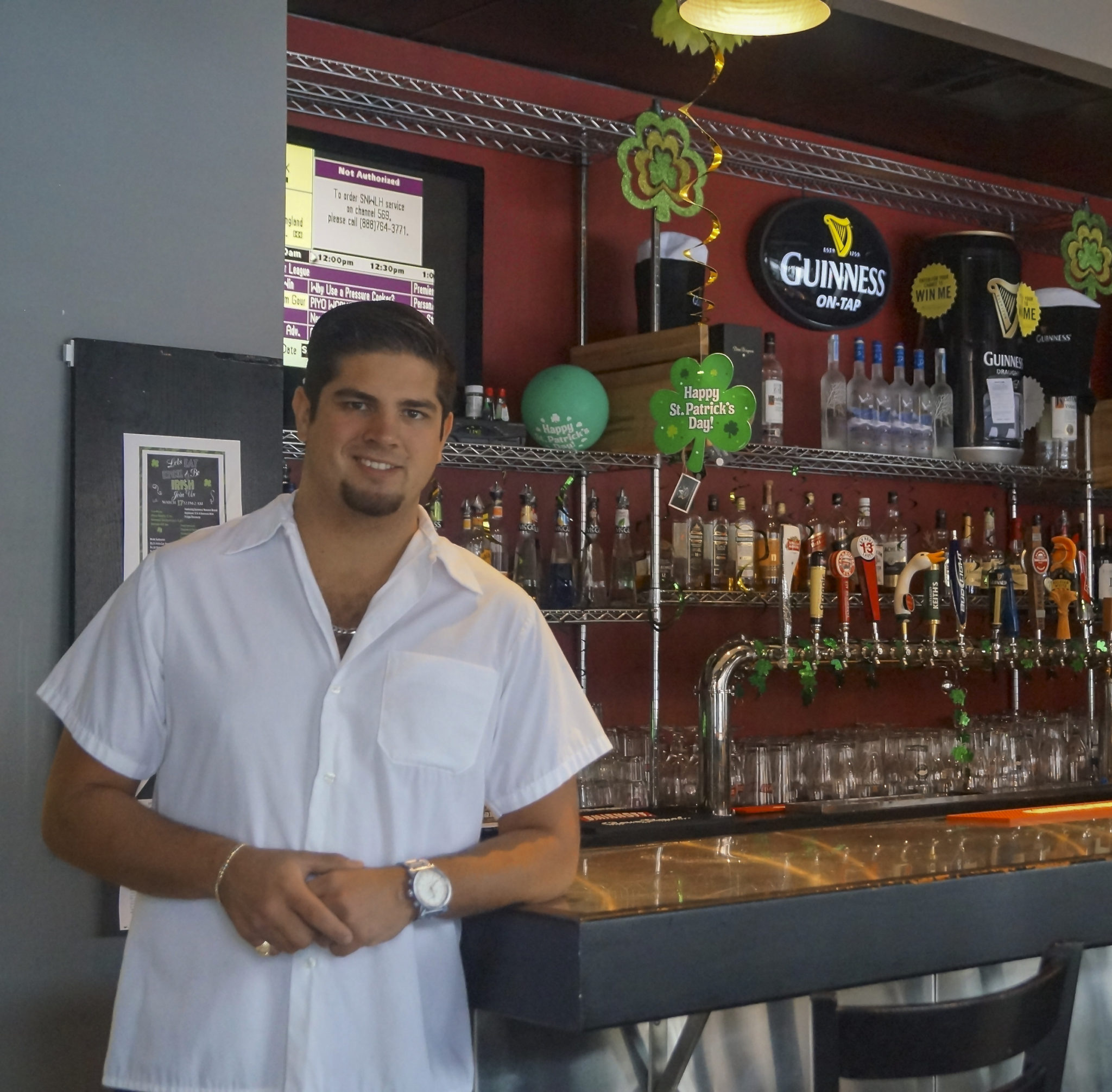 Brantford’s downtown is home to a wide variety of shops and small businesses. These businesses define Brantford, but what defines the businesses? This is the inspiration behind “Clerks”; getting to know those who know us so well. From our shoe size to our favourite item on the menu, these business owners make us feel more like family than customers. With that being said, let us shine the spotlight on Ryan Devlin, owner of Devlin’s Advocate.

For those who don’t know, what is Devlin’s Advocate and what’s it all about?

It’s a kicked up pub I like to say. It’s more of a bar, restaurant [and] lounge. We took what the Piston Broke was and we like to say we cleaned it up and made it a little bit better. We still wanted it to be welcoming, we wanted to be able to offer a place for students as well as middle-aged clientele. The elderly can come and enjoy a good meal. We’ve got live entertainment every Friday and Saturday so it’s combining a place with good entertainment with good drinks and really great food as well.

Where did you get the name “Devlin’s Advocate”?

It’s kind of a play on words, having our other restaurant, Devlin’s Country Bistro, we decided we had to work with the Devlin’s brand. It’s a name that we’re very fortunate to have go a long way in this town. It attracts lots of customers and at the same time, it speaks quality as far as we’re concerned. That’s something we want to stand behind. Devlin’s Advocate, it’s an advocate for Devlin’s Country Bistro, but obviously it’s the play on words with devil’s advocate. We’re more of an advocate for Devlin’s than the devil of course, but at the same time it’s arguing the good instead of the bad in things.

What made you want to open up a “kicked up pub” instead of a sports bar or a bar and grill?

I just felt it was what Brantford needed. What I’ve seen with our other restaurants, people’s way of dining has changed. We have a fine dining restaurant, but the bar aspect of it is our busiest part. I find customers will be coming in and ordering lots of appetizers. So when I looked at what I wanted to do for a restaurant, I wanted to be able to offer a menu that lots of people could just share with. The atmosphere kind of fell into place. It’s something that Brantford doesn’t have as far as I’m concerned. It was a pub before and it worked, don’t get me wrong. I wanted to work with that premise but just make it more welcoming and cleaner looking. Be able to appeal to more of a crowd while keeping customers here.

The menu focuses on the “sharing is caring” appetizers. Did you base the menu off of the dining habits you’d noticed?

That’s exactly it. I like to have a different menu. I like people to be intrigued but at the same time, I like the servers to have something to talk about. As opposed to a typical restaurant, where you know what you’re going to eat before you look at the menu. I want people to look at it and go, ‘woah’, but at the same time give the server something to talk about. Having them explain that the first side of the menu is a really elaborate appetizer menu. But at the same time, the backside of the menu is similar to a steakhouse menu, in the sense that you order your meat, but you can get your side separate. I did that under the premise that most people are coming and enjoying buying plenty of appetizers, but if you’re anything like myself, at the end you still want a steak. But I don’t want to be tied up into eating my vegetables and my mashed potatoes for instance. So if there’s two or three people that really want a steak, we’re more than happy to slice it up and serve it to you.

What type of history do you have in the restaurant business?

My history’s deep, it’s kind of an interesting story. I was born into the industry; my dad opened up Devlin’s Country Bistro 26 years ago and it was that year as well that I was born. He said I was the best mistake he ever made. Unfortunately for him, he couldn’t afford a babysitter being in the financial position he was in trying to open up that restaurant. Fortunately for me, the chefs were my babysitters. There’s pictures of me less than a year old sitting in a highchair in the kitchen. They would always throw food on my highchair to shut me up so I’d stop crying. So I was born into that and I always had my own little cook station. The joke was I had peeled more shrimp by the age of eight than any chef will peel in their life. It was one of the things my dad would do to keep me busy. I lost my mom at a really young age and my dad, being a single father, it was the time we had to spend with him. He would take me into the kitchen, I’d work alongside him and started catering with him at 11 years old, because quite frankly in this industry you wake up early to go to work and you don’t come home until late at night. It’s not rare for us to work 16 to 18 hour shifts for 20 days on end. I took a loving and a passion to it at a very young age.

What was on the schedule for St. Patrick’s Day?

It was arguably one on the busiest St. Patrick’s Days that’s ever been [in the building]. We put a lot into it. It wasn’t for any lack of planning. The decor is one of the small things. Live music started at noon and went through until 2 a.m. So we had two different bands play and they were all amazing performers. We had a huge selection of Irish food that we had for the weekend. We had a lot of items that were really appealing and lots of Irish drink specials too.

Where do you stand on the St. Patty’s/St. Paddy’s Day debate. How do you spell it?

It’s either St. Patrick’s Day or St. Paddy’s Day. It’s “Paddy’s”, with D’s. 100 per cent. It’s always been an argument and I’ve always said it was St. Paddy’s or St. Patrick’s. It was reinforced by a Jameson commercial that came out where they said the same thing, ‘it’s either Paddy’s with the D’s, or Patricks,”. I don’t have any other reason other than Jameson backing me up.

What does Devlin’s Advocate have planned for the future?

We’ve got lots planned actually. There’s more than we want to do with so much potential. Our main premise right now is just getting more people in for the night life. There’s lots that I want to do to grow this bar, especially on the inside. I have plans to move the bar to the front of the restaurant, take out all the washroom and move them downstairs. It would open it right up. We see on a night like [St. Patrick’s Day] everyone wants to be at the bar, and the bar just so happens to be in the middle of the restaurant, which makes for a terrible flow. People come in the front door and they go to the bar right away. It doesn’t make it easy to execute as well as we would like to. That’s our main plan as far as design, and that’ll happen sooner than later, assuming we can get a really good night crowd going again. I would love for people to come in at night to give it a try and see what we have to offer.