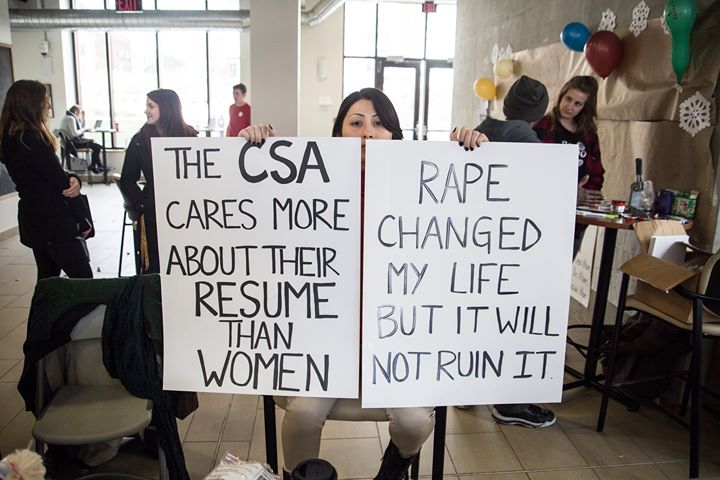 Robitaille was part of the defence counsel for Jian Ghomeshi, who was tried and acquitted for sexual assault in 2016. On March 6, the defence lawyer declined her invitation from the Criminology Student Association (CSA) annual conference.

“I do not think there is enough time before my scheduled talk to sort through the complaints and the call for it to be cancelled,” Robitaille wrote in an email to the CSA.

Following CSA advertisements that Robitaille would be speaking at their event, a Laurier collective known as Advocates for a Student Culture of Consent (ASCC)* shared an email template through a Facebook page titled “We Believe Survivors: a Call to Action at Laurier Brantford”. Students were encouraged to use this template to send to Laurier representatives, including the CSA and the Students’ Union president, voicing their opposition to her invitation.

ASCC took issues with the CSA inviting Robitaille to speak, because of the nature of her cases. They felt her speaking at Laurier would be a contradiction to its stance as a safe space for survivors. The template included the following:

“This event devalues the survivor centred focus of Laurier and the National Day of Action. We believe this event is counterproductive, despite the rhetoric of celebrating a female lawyer. Her gender alone does not mean she is advocating for gender equity. The experience of survivors having to hear, discuss, talk and debate about the experiences of sexual violence constantly around them is re-traumatizing and overwhelming.”

Abigail Coloma, a survivor of rape and sexual trafficking, was concerned more with how the CSA went about advertising the event. Coloma, who is a regular attendee of criminology conferences did not partake in the email campaign. As an aspiring defence lawyer, she was interested in Robitaille speaking. However, Coloma explained that the CSA only advertised Robitaille’s involvement in the Ghomeshi case which caused her to relive past trauma and contemplate self harm. She further explained that this could have been avoided had the CSA advertised the subject matter of Robitaille’s speech instead.

“For me, personally, I’m not affiliated with any group,” said Coloma. “I’m all for freedom of speech, I’m not trying to censor her, I’m saying why didn’t [the CSA] let me know? Why did [they] advertise like that?”

In an email sent to the CSA, Robitaille stated that she had given CSA president, Ranpreet Randhawa, the choice of having her present a “career talk” or a “justice talk”.

“Our reasoning for bringing her here was to have a open discussion on what it means to be a defence lawyer in the Canadian justice system,” said Randhawa.

“I was told that the students would prefer a discussion about the justice system…” wrote Robitaille. “I prepared to deliver my remarks called “Guilty by Association: the role of defence counsel in an adversarial justice system.”

“I would be remiss not to note the following: Mr. James Lockyer, my colleague and your keynote speaker last year, was not the subject of any complaints or calls to cancel. We do the same job, for similar clients, facing similar charges. The only difference is our gender,” she also wrote.

Robitaille’s cancellation caused an uproar among certain members of the CSA and Laurier community. Rumours circulated that Robitaille had feared for her and students’ safety. This resulted in blame being placed on the International Women’s Day walkout, which was organized by the group 15 and Fairness. The walkout was held during the annual conference but was not directly related to the conference or Robitaille’s attendance.

“I think that it’s just miscommunication that people think this was a protest towards the CSA. We didn’t really support the CSA speaker, but the rally that we had and the walkout were not in direct [opposition],” said Eddie Sauve, one of the organizers of the walkout.

Debates exploded on Facebook in comment sections for posts on both the CSA and We Believe Survivors pages over freedom of speech. Among other concerns, the role that universities play in critical thinking was repeatedly argued. This triggered a backlash towards ASCC from the general public and Laurier community. Dr. David Millard Haskell, an associate professor at Laurier Brantford, wrote an opinion piece for the Toronto Star. He wrote, “The ability to think critically comes, we used to argue, from our students being exposed to competing ideas, wrestling with the logic and evidence of each, and then deciding which is best. Unfortunately, the truth of that argument is called into question when significant numbers of our students demand not to be exposed to competing ideas.”

ASCC emailed The Sputnik a press release following the publication of Haskell’s article. The release elaborated on their motivation for encouraging students to send emails, as well as responded directly to comments made by Haskell in his opinion article. “In light of recent comments made about us by professor Haskell in the Toronto Star, we want to be clear that there is absolutely nothing not ‘adult’ about seeking help or speaking out,” ASCC wrote.

The Laurier Students’ Union has been investigating the situation, alongside Laurier’s administration. In an email, the Students’ Union President Tyler Van Herzele wrote: “Our policies and procedures exist to help mitigate risk and ask the questions that those with the vision may not be aware of. We work closely with university partners and departments to help facilitate discussion and provide the learning opportunities that our students at Laurier deserve to engage in.”

*Taylor Berzins a founding member of ASCC is the HR manager of WLUSP.