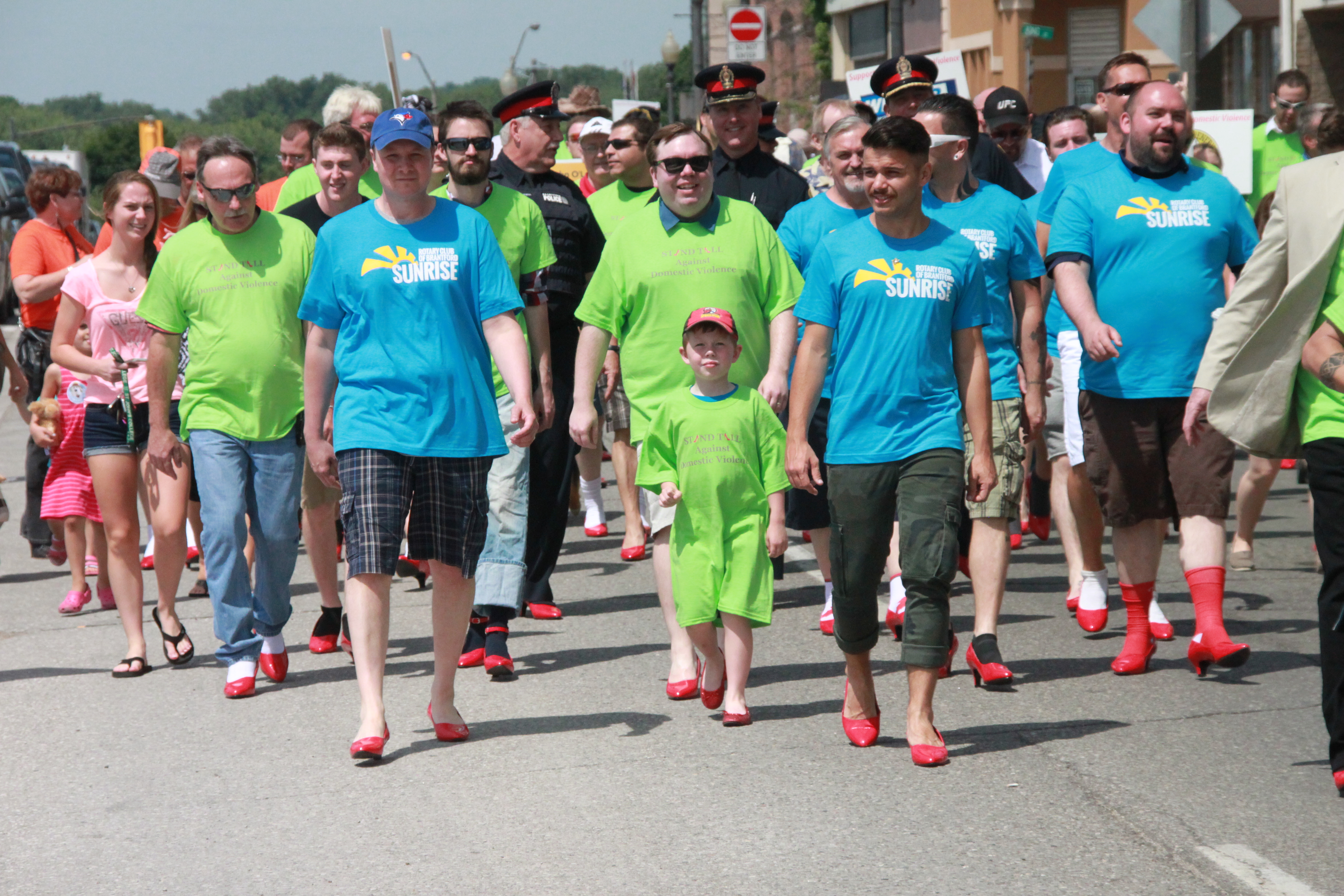 Downtown was abuzz this Saturday as the clicking of heels on pavement rang out alongside the call of bagpipes.

A crowd of men gathered in Brantford’s Harmony Square on Saturday to slip on red pumps and strut the downtown core. The spectacle was the fifth annual Men in Heels campaign, an event organized by Nova Vita, Brantford’s domestic violence prevention centre.

In regards to the cherry red pumps that have become synonymous with the Men in Heels campaign, Freeman isn’t sure how the tradition began. “I think we just thought it would be a neat thing to do and really highlight the issue,” Joy Freeman, Executive Director of Nova Vita, explained.

For the event organizers, Men in Heels is about much more than a good photo-op of respected men from the community donning delicate footwear.

“I think the whole thing is about women, not men. And we need to keep the focus on the women, rather than men wearing heels and the construct of masculinity,” Freeman said, “The whole purpose of it is to have men experience, at least metaphorically, some of the pain and suffering that happens for victims of domestic violence. So I don’t like to talk about masculinity in terms of men wearing red shoes because I think that trivializes the matter. It needs to focus on women and the struggles of being a victim of domestic violence.”

According to Freeman, the event has grown each year. This year’s Men in Heels campaign broke its fundraising record by bringing in about $43,000.

Freeman explained that this year’s event was unique in the number of father-son teams that participated, noting that a lot of young men and children joined this year’s walk. “It’s all about awareness and raising young boys to respect women, to respe ct relationships and to have positive relationships,” she said.

Domestic violence is a prevailing issue that affects the lives of many women in Brantford. According to the Nova Vita website, the shelter’s beds are almost always full, stating that, “the average occupancy rate for the 2013/2014 fiscal year was 94 per cent”.

Local professor and federal NDP candidate, Marc Laferriere has participated in Men in Heels every year since its conception. According to Laferriere, Men in Heels is an opportunity to combat domesticated gendered violence.

“It’s something that we let happen as a community and we have to address as a community. Opportunities like men in heels, where we can actually talk about it in way that isn’t triggering emotionally, is actually a really helpful way for boys to get involved in the anti-violence [discussion]. It’s encouraging to see boys, who are literally taking a stand, with an extra three inches of heels,” Laferriere said. “They’re able to now have a frame of reference for this sort of stuff, if they ever encounter it in their lives, and to prevent it throughout their lives, so that’s really vital.”

According to Nova Vita’s website, spousal homicide accounts for 15 per cent of all murders in Canada, and about 40 per cent of wife assault incidents occur during a woman’s first pregnancy.

“It’s our problem.” said Freeman, “It’s a family problem, not only a men’s problem or women’s problem. It’s everyone’s problem. And, we really do have to get together and do something about domestic violence.”