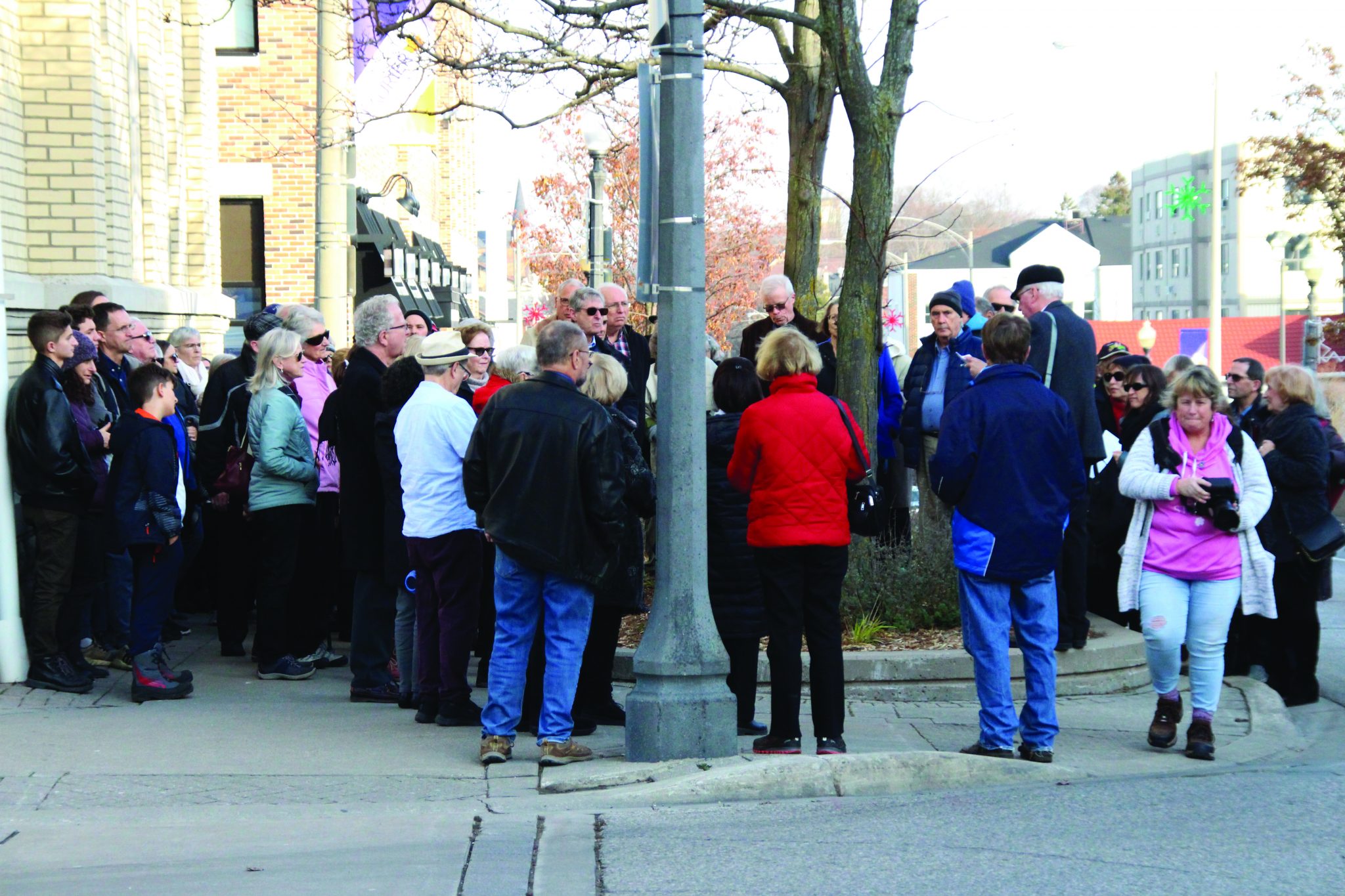 November 26 there was a gathering of many people who once belonged to the Jewish community of Brantford in front of Post House and RCW.

The mood is happy and nostalgic for many, and the reason for this event started with a man’s written excerpts of his youth which resonated with the others in the Brantford Jewish community.

The now deceased Queens University Academic Gerald J.J. Tulchinsky had studied the Jewish history and community throughout Canada for many years, and wrote the book Shtetl on the Grand.

The book beautifully describes the typical life of a Jewish member in Brantford after the Second World War, and the evolution of the city and the Jewish community side by side. On a chilly November day years later, many would walk down memory lane with organizers Bill Darfler, Jack Owetz, Dr. Christina Han and Peter Muir as the stories of Jewish involvement and evolution of Downtown Brantford were explored.

Exhibits of photographs taken on Colborne St and Dalhousie showed a once thriving metropolitan Brantford that once equaled the cities of Toronto and Montreal.

Brantford once showed extreme promise and was the hub of many booming businesses and farm equipment manufacturers such as Verity Plow Co., J O Wisner (Massey Harris), and many others, rivalling the other great cities of the nation.

Many attendees also mentioned their memories of the Brantford Synagogue which at its height was larger and more active than the Hamilton Beth Jacob Synagogue. Many still visit the Mount Hope Cemetery where many Jewish members rest in peace.

As the tours finish and the exhibits comes to a close, the attendees which have travelled from Port Dover, Toronto, Kingston gather for refreshments and reunions were made.

Many speak of their appreciation for Tulchinsky’s book and expressed gratitude for the event’s organizers, who were non-Jewish themselves, for reminding the people of Brantford their history and bringing their nostalgic memories to life once more. Emails from all over Canada and even abroad in Israel were sent to the organizers, applauding the organizers and expressing their wishes to attend the event.

Speeches and performances by members of Grandview Theatre Company and Brantford Theatre Workshops organized by Peter Muir brought events in the book to life. The artists powerfully expressing the memories which resonated with many of the former and current residents.

After the event’s close, many return home happy and hopeful to a future as thriving as Brantford’s past. Students and faculty who witnessed the nostalgic memories resurfaced have a priceless gain. Their appreciation of the history and the spark of curiosity and wonder if the city can possibly return to its former glory.

“The gleam in our collective eye is to hopefully do the same for other ethnic groups in Brantford, ” said organizer, Bill Darfler.

Other prominent groups the organization is looking to shine light on are Polish, Italians, and Filipinons.

The event has been successful in reintroducing the history of Brantford’s Jewish residents and the arts have wonderfully opened everyone’s eyes by animating the thought-to-be forgotten memories of this community.

What can this tell us as a Golden Hawk community? That Brantford has so much untapped history and knowledge that we have yet to discover. That there are endless opportunities to thrive not only as an individual, but as a community.

That through writers, historians, artists and hopeful academics and future leaders, the memories of a former powerhouse of a city and its ethnic and religious groups can be reincarnated.

To challenge the ignorance of those who claim that study of the arts and history is not beneficial to a society and invite them to witness the works of those they ridicule can and have helped many communities. Tell them… look at Shtetl on the Grand and how this event and the efforts of many have on this community as a whole.