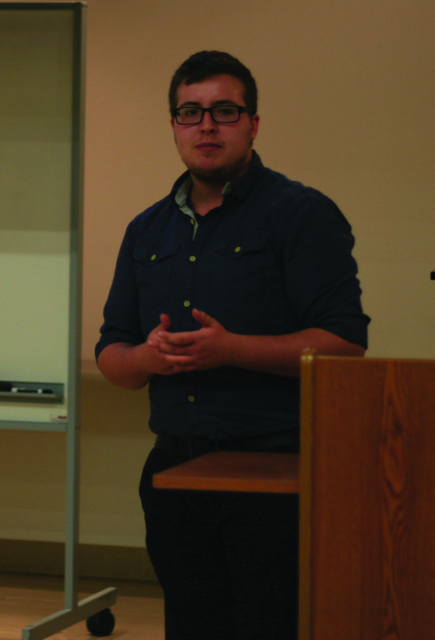 This year has provided many social movements, one of the most notable being the transgender (trans) movement. Yes there has been talk of celebrities such as Caitlyn Jenner, Laverne Cox and Chaz Bono, Janet Mock and Ruby Rose, but what about the trans movement in our own community?

The term trans is used as an umbrella to describe the spectrum of people whose gender identity and expression, to varying degrees, does not correspond with their physical sex characteristics or society’s assigned gender roles and expectations. Although, these terms continue to be highly debated within the LGBTQ community.

Nov. 20, 2015 was the 17th annual Transgender Day of Remembrance. On this day people everywhere are asked to remember, honour and mourn the loss of these murdered individuals. Finn Cole, co-facilitator of Gender Journey Brant said, “I like to call them trans warriors, because they are trying to live their authentic lives, trying to be true to themselves and having so many people hate us for just wanting to be us.”

For the first time the Ontario Parliament had a moment of silence for Transgender Day of Remembrance. Cheri DiNovo, an NDP LGBTQ critic, called for Parliament to honour and remember the trans people that have been murdered due to transphobic hatred and prejudice.

Cole said, “It is truly a great accomplishment for the trans community to be recognized by Parliament.”

A Trans Murder Monitoring project that began in 2008 found that in the past 12 months alone, there have been murders of trans people in 29 countries. The majority of these murders were recorded in Brazil at 118 murders, 27 in the US, and 24 in Mexico.

The report states that “throughout all six world regions, the highest absolute numbers have been found in countries with strong trans movements and trans of LGBT organizations that do a professional monitoring.” Cole explained that “visibility is great, but the more visible we are can also have that negative impact because it puts us out in the public eye. For the people that hate, we’re on their minds.”

The murders committed against trans people are particularly disturbing for Cole, being a trans man himself. He said, “Whenever I start thinking about it, I want to cry.”

In Tokyo, a trans man by the name of Yoshi Tsuchida was found dead last week. His body was mutilated and draped in a blanket while his head was covered in a plastic bag, face skinned off.

In Philadelphia, Keisha Jenkins was the twentieth trans woman of colour murdered. She was shot in the back by five to six men as she was getting out of her vehicle.

In India, Suman Singh, a trans woman was set on fire by four people this past January and died of her injuries in the hospital.

In September of 2004, Divas Boulanger, a trans woman was murdered in Winnipeg. She was hit over the head with a blunt object then her body was wrapped in plastic and thrown off the TransCanada Highway. Her body was found a week later. On Nov. 12 of this year, her killer was finally convicted and given a life sentence with no eligibility of parole for ten years.

“These are such violent acts, they go beyond the regular violent acts – I mean the indignities that are done to the bodies … it’s to the extreme,” said Cole.

According to the Trans Murder Monitoring Update, as of Nov. 9 2015, there were 271 trans persons added to the list to be remembered, mourned and honoured. However, because the victims of these murders are often miss-gendered or go unreported, the number is believed to be higher.

Laurier’s Rainbow Alliance committee hosted a Trans 101 workshop on Nov. 20. With 25 people in attendance, the event spoke about the trans umbrella and defined important terms and identities. They went over proper etiquette when speaking to trans people and closed with a guest speaker and an open discussion for the attendees to ask any questions they may have had for the trans community. Events like these must continue to happen to educate and inform people of the issues that trans people face.

Cole explained, “There is a large trans community in Brantford and unfortunately, a great deal of them are afraid to come out because of transphobia.”