Pride Toronto: How we got here 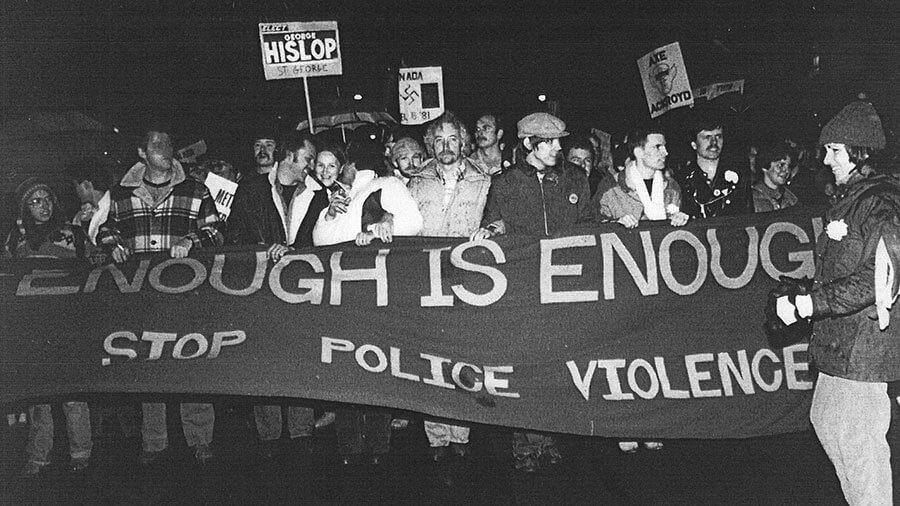 Sunday, July 3, I and thousands of other individuals gathered in a sea of rainbow in downtown Toronto.

As 3 a.m. grew nearer, the parade slowed down. We all bowed our heads in silence for the victims of the Pulse shooting in Orlando, Florida. When the moment was over, there was a resounding cheer through the crowd.

There was anxiety, confusion and whispering. There was talk of fainting and fights. Then a member walking in the parade approached me and informed us that Black Lives Matter Toronto had stopped in front of police headquarters for a sit-in.

At first, I was annoyed. It was 33 C outside. We had no shade or water and my feet were hurting after the parade from walking all over the city. I wanted the parade to continue, I wanted the happiness to continue. We were all annoyed. It was hard not to be because it seemed like they stole the spotlight from the LGBTQ+ community. I felt that way until I realized the harmony of the two communities; both minorities and both historically discriminated against. I stood in silent solidarity with their actions.

Let me start by acknowledging my privilege. As so many people who do not identify with the communities are forgetting. I am a white, cisgender, upper-middle class woman who identifies within the LGBTQIAA umbrella.

Pride was not always a highly commercialized event. Pride Toronto started out in 1981 as a protest against police brutality in the wake of the bathhouse raids. The raids were orchestrated by the police and resulted in over 250 arrests. Black and immigrant communities came together to protest against the raids. This was the birth of Pride in Toronto.

In 2016, we are still seeing the same police brutality against black and brown LGBTQ+ people. On the 35th anniversary of the raids, Black Lives Matter Toronto used their platform, as the honorary group at Toronto Pride, to mimic the same messages shouted in 1981.

They brought Pride Toronto back to its roots and reminded Canada that we have such a long way to go in being an accepting and inclusive society.

This is what people are forgetting! Pride is inherently political. It is a political statement to participate in Pride and to attend Pride. There is no way of separating the two. When black and brown bodies are criminalized by their colour and status, it becomes a political matter of human rights.

This protest is the definition of creative activism; occupying and utilizing space that was already set up for broadcasting and using it to bring forth a really important message. I understand where they are coming from and I can respect their actions.

Yes, I wish the protest was planned. Yes, I wish it was organized more effectively but would it have had the same impact? Canada is listening to the words of BLMTO and their community partners in blackness, yes, and BQI. They have captured our attention. I hope they use this platform as effectively as they used Pride Toronto.

Disclaimer: I struggled with my privilege in writing this article. I do not have the same experiences as the individuals mentioned in the protest but I stand in solidarity with them. I encourage them to put their demands into action. To hold those accountable for their actions and to keep fighting for the basic human rights and respect every Canadian deserves.