Podcast on blast: A look at the local podcasting scene 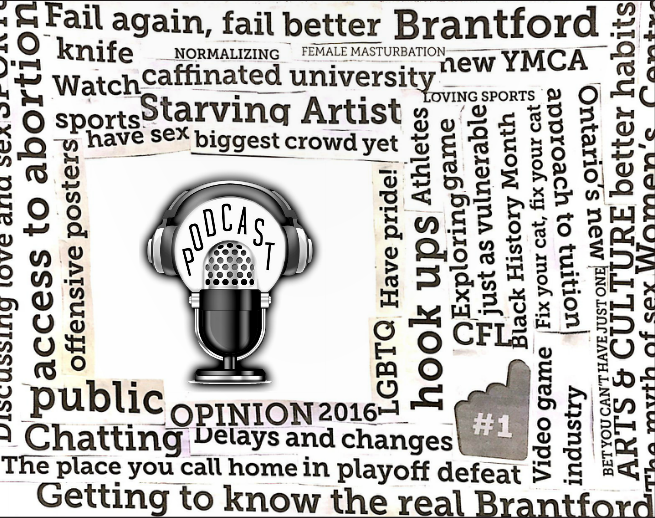 Podcasting popularity has risen within the past years, and Brantford and surrounding areas are no exception.

Brantford podcaster and co-owner of the Devil’s Bench, Bill Dungey, has taken advantage of the podcast wave. On Feb. 12, Dungey released the first episode of Days of Old, a biweekly series of podcasts. These episodes tell the stories of ordinary people from “contemporary history” using letters, diaries and interviews. The first episode is based around those who fought in D-Day and about their loved ones.

“I want to accurately represent the details I’ve been so fortunate to find, but I want to layer between those bits a slice of myself. Our world is very, very fast. Sometimes I feel like we don’t really get an opportunity to really explore what made up the people who got us here. I feel like, in some way, I’m helping a few people to do that,” stated Dungey.

Dungey, who has been podcasting for about two years, was able to obtain these “relics” through the internet and certain connections. Dungey also gets information off sources such as the CBC and the BBC. “I often tell people we have the entire collected knowledge of our species just coasting along in our pockets. It’s true,” stated Dungey.

The podcasts have been receiving positive feedback and was featured on the “new and noteworthy” list on iTunes in the history section. Days of Old was also featured in the American magazine, History Revealed and on NPR.

The series has reached a total of 827 downloads. Dungey said that he feels it will grow when the fourth episode is released, which will be about control, secrecy and propaganda.

Aside from Days of Old, The Devil’s Bench broadcasts a series called, The Benchcast every Tuesday evening. The Benchcast is an interview-style podcast that has featured a variety of guests, ranging from award-winning comic book illustrator Brian Wood to the mayor of Brantford, Chris Friel. Co-owner of the Devil’s Bench, Alex Kirley, said he is pleased with how the podcasts have been “expanding their sphere of influence,” noting that they have received emails from listeners as far as Europe.

Kirley stated how he was happy with the 2,000 downloads that The Benchcast has obtained within the two years it has been running. However, Kirley would “love to get more under their umbrella” in terms of podcasting. Kirby said he hopes to start a podcast related to geocaching and wants to build a podcasting community in Brantford. “We’re Brantford, helping out Brantford,” stated Kirley.

Kendrick said releasing weekly podcasts wasn’t as challenging as one might think. “In today’s day and age with digital audio mixers, it’s actually quite easy to record them. From there, we take it into a post-production program, like GarageBand, and do some simple trimming edits, followed by a short intro to each sermon. We actually find it quite enjoyable to do,” said Kendrick.

The Harvest Bible Church Brantford is currently in the middle of a series called, Following the Son. Starting Mar. 27, they will begin a five-week series called Breakthrough.

Kendrick stated that he’s had positive responses from listeners so far. However, there is room for improvement. “The only thing we could improve on is how fast after a weekend that we can get it uploaded. Sooner would be better,” said Kendrick.

At the time of publication, there is a total of 86 podcasts of the sermons which were recorded live. However, Kendrick is unsure of the listenership.

In the Simcoe area, Peter Van Dyk is making a name for himself in the podcasting community. Van Dyk hosts Live From the Dutch Hall, a podcast series that “focuses on having no focus.” “Topics are everything and anything that bounces through my head that week,” stated Van Dyk. After a scroll through the Live From the Dutch Hall homepage, topics range from Hitler’s genitals to interviews with ex-professional hockey players.

By night Van Dyk is podcasting, however, during the day he spends his time doing business consulting and bookkeeping. This has not affected Live From the Dutch Hall’s ability to grow.

Van Dyk started the series in Dec. 2013 with two mics, an eight-channel board and GarageBand. Less than three years later, Van Dyk has established a dedicated listener base and sponsors. “Listeners are starting to look for ways to keep us going,” said Van Dyk. Van Dyk is also happy to have his regular cast, an in-house band; The Nocturnal Emissions, and a bartender. The series also has a total of 31,750 downloads at the time of publication.

Van Dyk said the he feels that there is a bright future for podcasting and for Live From the Dutch Hall. “I feel that as wifi capabilities continue to improve and people start to integrate podcast technologies into new cars and smart TVs, it will continue to broaden its penetration into the market of people who have not yet adopted new media.”