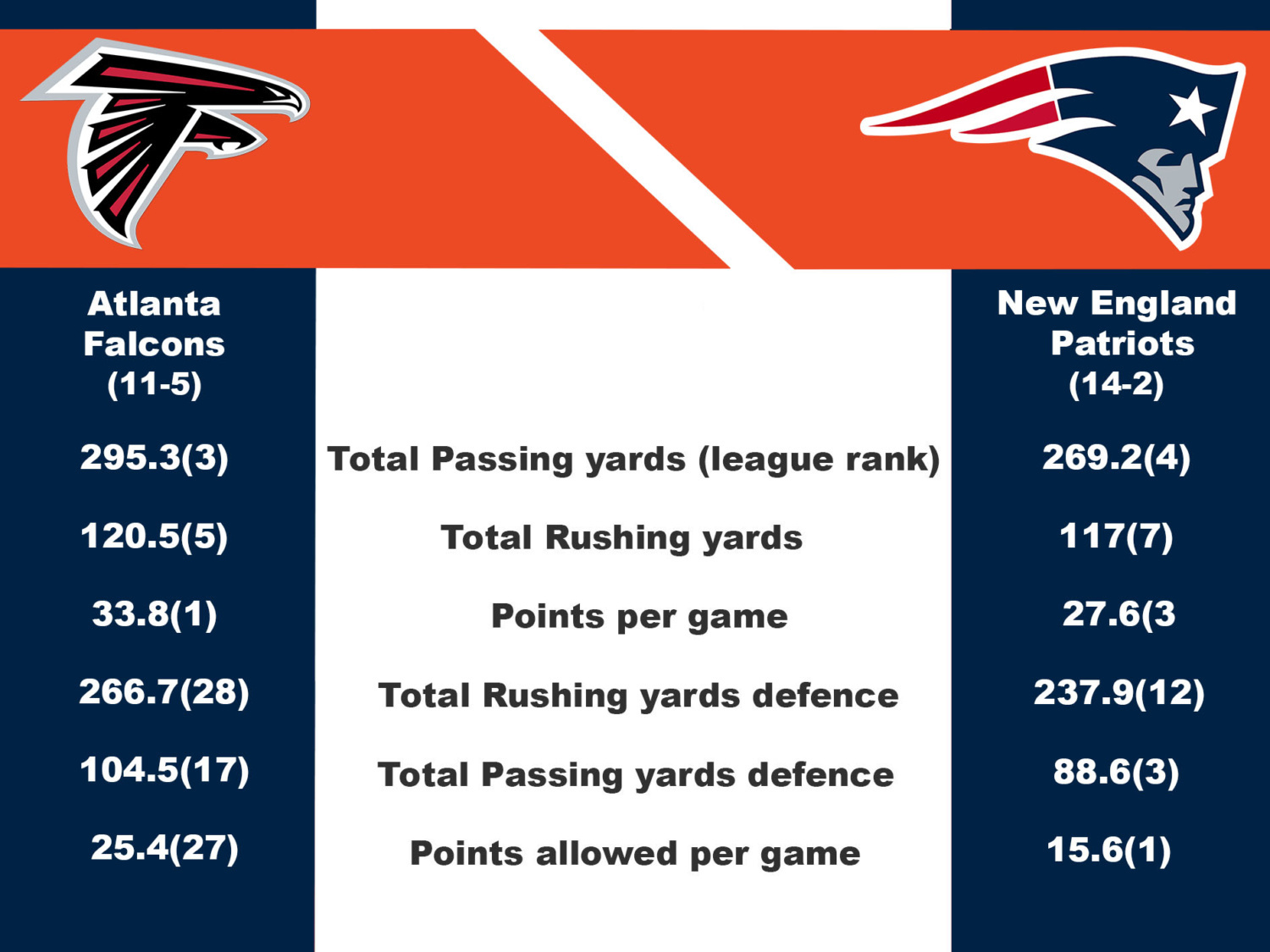 The Atlanta Falcons and New England Patriots will play for NFL supremacy in Super Bowl 51 on Feb. 5.

Despite their lack of national following and fewer high profile players, the Atlanta Falcons have the league’s top offence.

The Falcons efficiently moved the football better than any other team in the league. Three people deserve credit for the Falcons being the best offense. Quarterback Matt Ryan, who should be named league MVP, and offensive coordinator Kyle Shanahan. Additional praise should be given to Guelph, Ontario native and former Patriots executive Thomas Dimitroff, the Falcons general manager.

But what makes the Falcons offense so explosive is the understanding and willingness of players to accept lesser roles in the game plan to maximize mismatches. The best example of the Falcons using their scheme and mismatches is with their two-headed running attack. The Falcons divide touches between Devonta Freeman and Tevin Coleman. Freeman serves as the back in power blocking schemes. When the Falcons use a zone blocking scheme, they elect to use the one cut ability of Coleman. The Falcons use both backs in the passing game too. By getting favourable matchups with opposing linebackers, the Falcons take advantage of Coleman’s big play ability in the receiving game.

The questions about the Falcons pertain to their defense and special teams. To beat the Patriots, team’s need to get pressure on Brady with four or fewer pass rushers. Unfortunately for the Falcons, they only have one dependable pass rusher, Vic Beasley. Beasley led the NFL with 15.5 sacks. Rookie middle linebacker Deion Jones and strong safety Keanu Neal have been fantastic for the Falcons in the middle of their defense. But the Falcons can be exploded in the flats and down the sidelines. Corner Robert Alford is penalty prone and Jalen Collins can be beaten.

The New England Patriots may be headlined by arguably the greatest coach and quarterback in NFL history, making their seventh Super Bowl appearance. But it will be the lesser known lineman who will determine the winner of Super Bowl 51.

Expect the Patriots edge defenders to hit Coleman or Freeman and slow them from entering their routes. If they slow down the timing of the Falcons’ offense, they can use their pass rush to get to Ryan. Defensive tackle Malcom Brown anchors the Patriots line. If he can get penetration, he will disrupt the Falcons entire offense.

Expect the Patriots to blanket wide receiver Julio Jones. Usually the Patriots put number two corner Logan Ryan on opposing number one receivers with free safety Devin McCourty over the top. But the Patriots may elect to use top corner and Super Bowl hero Malcolm Butler on Jones.

Offensively, the Patriots may elect to slow down the Falcons offense by chewing up the clock. The Patriots offensive line is great, outside of weak link David Andrews. If the Patriots are going to win, their running backs are going to have big games. Expect LeGarrette Blount to run behind right tackle Marcus Cannon and guard Shaq Mason. Don’t expect the Patriots to be careless with the football after leading the NFL in turnover ratio.

The Patriots like to take advantage in the passing game with their running backs too. Expect the Patriots to find a favourable matchup with Dion Lewis on a Falcons linebacker at some point during the game. The Patriots feast on the intermediate passing game with Julian Edelman. But to create more space, they will need Chris Hogan to be feared as a deep threat. If Hogan gets matched up on Alford, expect Brady to look deep. Even if Hogan does not catch the ball, there is a good chance Alford will be called for a penalty.