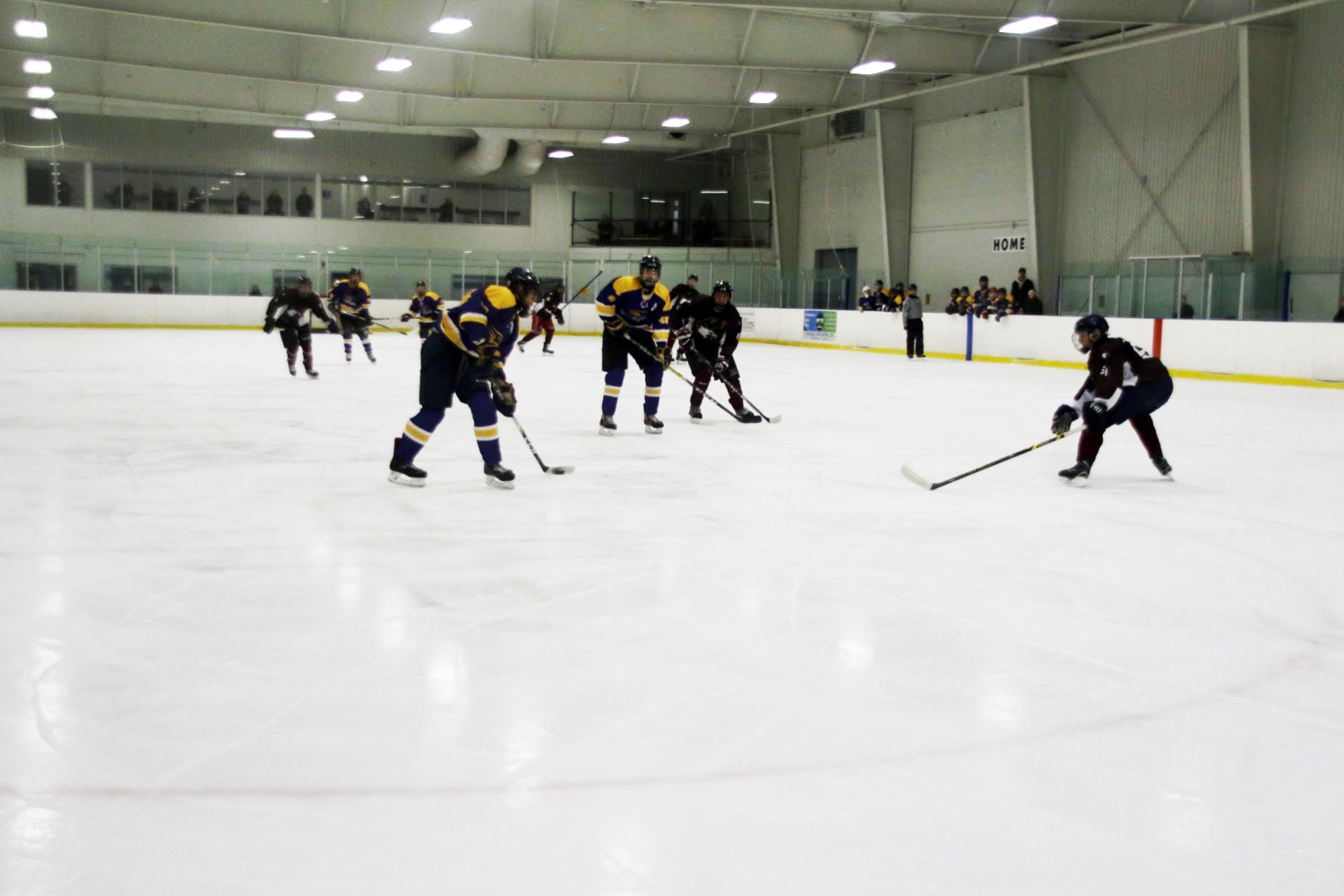 In their second tournament of the year, Laurier Brantford’s extramural men’s hockey team fell in the semi-finals again.

After opening the tournament with consecutive shutouts, the Golden Hawks found themselves down 2-0 to the Waterloo Warriors. Two goals within two minutes to start the third was enough for Waterloo to hold on, despite a late push from Laurier.

Mitchell Smythe worked hard in the offensive zone, before being taken down, giving Laurier a power play with just over four minutes left in the game. Although the power play couldn’t score, Josh Bradshaw found the back of the net seconds later to reduce the deficit to one.

“I picked the puck up out of the zone, I was kind of all alone so I figured I’d get the puck on net and go for the rebound and it ended up going bar down,” said Bradshaw.

Eric Schuster made some nice moves in close to the Waterloo net but couldn’t finish on his wrap around move, although it did lead to a controversial scramble in front of the Warriors crease. Bradshaw was on the ice during the scramble and described what he and his teammates saw.

The game was full of offensive plays from both sides, with both goalies coming up big to keep the game close. In net for Laurier, Ben Brenner continued his strong play from the first game. The first goal was the result of a rebound scramble, with Brenner getting tripped up. The second goal appeared to be due to a blown coverage by the defence leaving a man open, giving Brenner no chance.

Golden Hawks captain Tyler Dosa said on the goalie’s performance, “We’re pretty proud of our goalies posting two shutouts, at the end of the day the bounces didn’t go our way and we’ll get it next tournament”.

Laurier advanced to the semis after Matthew Zangolli posted a shutout in his first career start against Dunham College.

The first shot from Dunham was originally called a goal before being waved off after the referees agreed it was gloved in. Seconds later Justin Homer scored the first goal of the game to make it onto the scoreboard, on a wrist shot from the faceoff circle.

“I stepped across the blue line and both defencemen went over to Dosa, so I thought I’d just wind up and throw it on net and the goalie just missed I guess, I’ll take it,” Homer described the goal that gave Laurier the early lead.

The Golden Hawks had limited chances with a strong defensive game before getting a power play early in the third. Jaden Simoneau generated two chances from the point, one hitting the post, while another one was tipped just wide by Tyler Jones.

With five minutes left in the game Zangolli was run over by a Dunham player, with Austin Lavigne coming to the aid of his goalie, resulting in a penalty. Zangolli remained focused and helped kill off the penalty, “It didn’t really rattle me, sometimes it might, but I wasn’t hurt or anything. Then I stayed focused and made a couple of good saves”.

An empty netter from Gray Sinden sealed the win for Laurier, finishing the group stage undefeated. Their first win was a dramatic victory over McMaster which was tied until the final seconds. A goal from Bradley Stitt with 2.9 seconds left was all Laurier would need.

Brenner was in net for Laurier’s first game. The Golden Hawks controlled the game and limited the opportunities for McMaster but that didn’t mean Brenner didn’t have to stay sharp, “This style of hockey, with no contact, it’s so easy to get burnt as a goalie. The play can be in the neutral zone and before you even realize it they’re on top of you,” said Brenner.

Laurier will head home for their final tournament of the season on Feb. 10 at the Wayne Gretzky Centre.

“We usually do well in our home tournament so hopefully everyone comes out and supports us,” said Dosa.

Dosa has a clear focus on where the team plans on improving for their final tournament, “A lot of our guys are first years, so they’re learning the breakouts but that’s what we’ll work on.”