Mulcair speaks on unemployment in Brantford 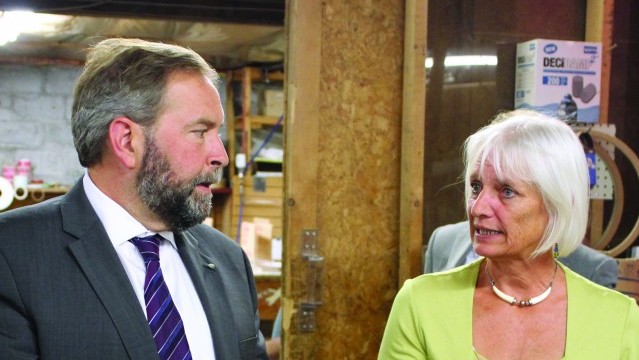 On Wednesday, September 12, 2012, NDP leader Tom Mulcair appeared at ProFab Plastics in Brantford.  A tour of the facility was guided by owners Judy and Neil Tranmer.  Mulcair was accompanied by local NDP candidate Marc Laferriere, and shared his vision for better employment in the region. Brantford and its surrounding area show that unemployment numbers have risen to the highest rate in the region. Mulcair commented on how the NDP has targeted the problems with job loss and will work towards fixing them, unlike the current Conservative government who has made plans to fix major unemployment issues but never acted upon them.

Profab Plastics is a small local business and a prime example of the businesses that the NDP is looking to help. Mulcair explained that it is a priority of the NDP is to assist small and medium sized businesses. With businesses succeeding and growing, it helps makes Canada a better place and the values of businesses and economy will increase on their own.

People have to be willing to grow and help their community, especially in smaller areas and in struggling communities. The results are not instant, but will take effect over time. Long-term solutions need to be created and enforced in order to help everyone in the long run. There are more students in post-secondary institutions nowadays, and many of them are struggling with tuition costs; increasing their debt in the future.

“Student debt is becoming a crippling issue,” said Laferriere. He also commented on how he can see the stress that debt puts onto the students.

Laferriere also commented on a former student of his saying that she “can’t afford the things her parents could at age 25.”

Small cities like Brantford do not offer a lot of opportunity frequently. This is discouraging and often students then do not want to stay after graduation. When jobs do come up, what tends to happen is that so many people apply for the position and only a few people will get the job.

When people do not have frequent opportunities available to them, they are forced to move or are unable to afford the cost of living and then are in need of further financial support. Supporting local businesses and providing more jobs is a good way to start.  When people are able to work, they are able to buy, thus entering the never-ending circle of support that communities need in order to stay economically healthy.

Laferriere concluded, “[Brantford] does not create a big welcome sign for students to settle down and create a life in this community [but] we want them to.”