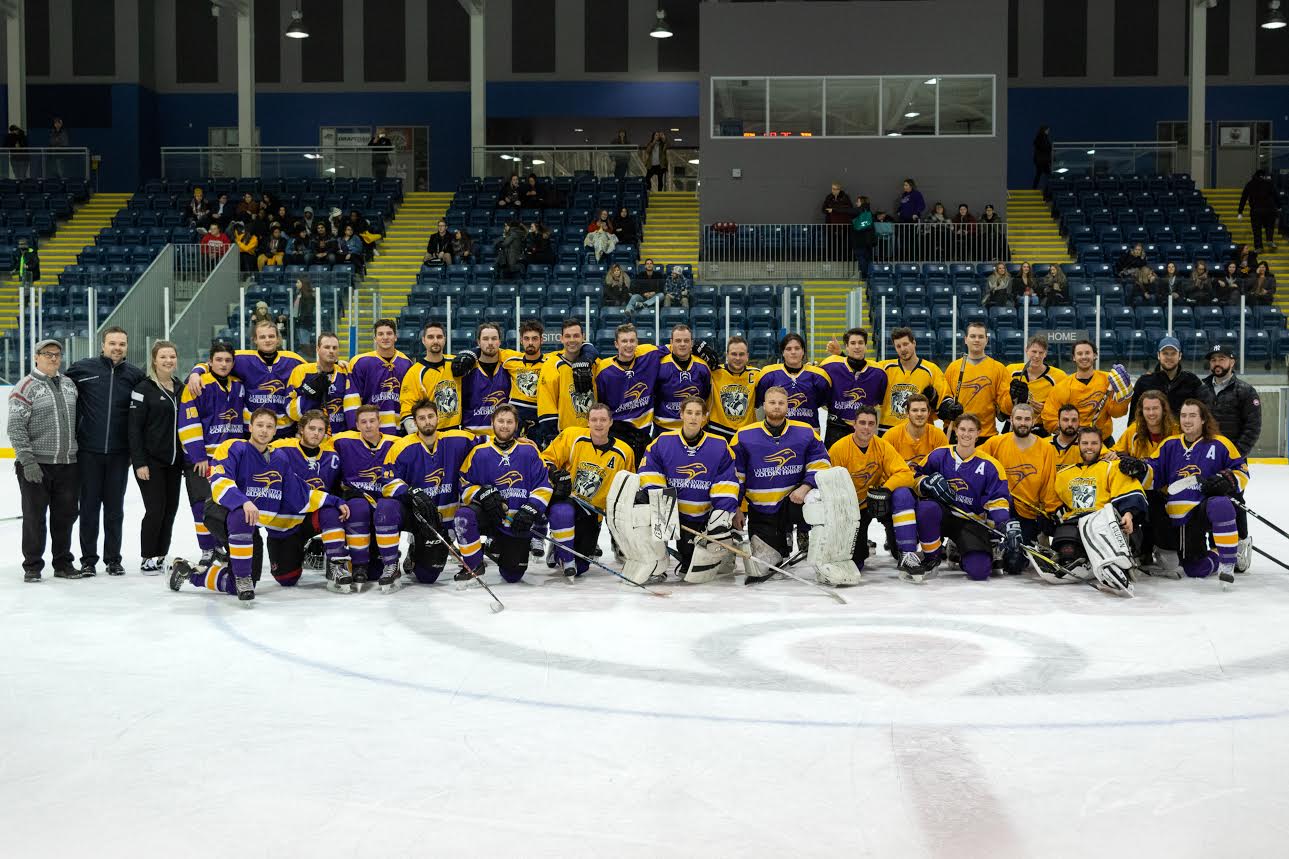 Spencer Hartman’s two goals and one assist helped the extramural team hold a solid lead throughout the game, but the alumni team tied the game 3-3 with a goal in the last 15 seconds of the third period.

The game then went to a three-minute nail-biter overtime. McDowell was able to find the back of the net without much time to spare.

“It was really great,” said Connor Gettler, a first-year who came to watch the game. “With 26 seconds left they really stepped it up and just put it in the back of the net. It was good.”

The alumni roster held 16 players – all of them men who had played on the extramural hockey team during their time at Laurier Brantford.

The 2-0 score at the beginning was the result of a slow start for the alumni team, but they learned to work better as a team after the first period.

“We got a nice intermission to go back and have some water and came out flying in the second,” said Michael Bondy, who graduated in 2016.

But the annual alumni game isn’t all about the competition. For most of the players and fans, it’s an opportunity to reconnect with old friends, teammates and classmates.

“Any time we get to come back here it’s a great time and we get to see everybody and it’s always a good time getting together with old friends and playing hockey with each other,” said Kevin Lamplugh, who graduated in 2016. “We don’t get many opportunities to do this.”

Not only did the event feature a hard-fought game between the extramural men and the team’s past players, but it also had a figure skating show, Chuck-a-Puck and raffle draws.

The Laurier Brantford figure skating club showed off their talent to some ABBA tunes at the intermission between the first and second periods.

“We had a lot of fun doing it,” said Kellie Burdon, president of the figure skating club.

The club plans to compete at two competitions in the next couple months. This was the first performance of the school year for the club.

“There were some nerves for sure,” said Burdon. “It comes with performing.”

There was a total of approximately 175 people attending the alumni game, excluding the teams and figure skaters.

“There was a huge turnout,” said fifth-year student Franny Liang. “So it’s another thing bringing a sense of community to Brantford, which is really important because the school is embedded within the community, so to bring the community with the school population is great.”

Since Laurier Brantford doesn’t have varsity teams that compete in regular season games, events like this provide students with an opportunity to support the school’s teams.

“It’s a great way to cheer on your school,” said Liang. “I think it’s great for the players to see their friends, their colleagues are all there — cheering for them.”