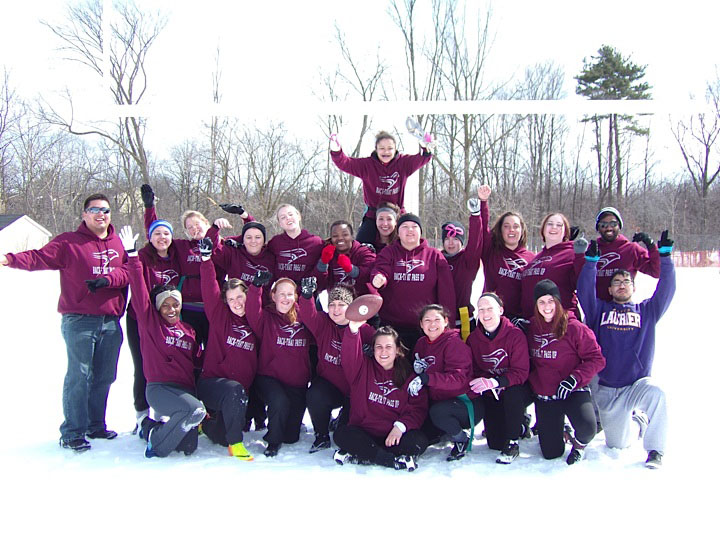 Another year of sports has come and gone, so let’s recap the year that was for Laurier Waterloo and Brantford. There have been some surprises throughout 2014 – some good, some bad. But overall 2014 was successful for Laurier on both campuses. So, without further ado, here are my top five athletic moments at Laurier in 2014 (listed in no particular order).

One of Laurier Brantford’s newer teams put themselves on the university athletics map with a huge championship victory at Sheridan College this past March with a 7-6 victory against Western University, arguably the best Powderpuff Football team this past season. The team had many obstacles to overcome throughout the tournament, playing the entire tournament shorthanded. Players were forced to play on both sides of the ball in positions they had little experience playing.

And then on the field the women had a tough road to obtaining first place, including a come-from-behind, tense 10-round overtime victory against Waterloo to make it to the finals and then needing another comeback to win it all. “One thing I’ve tried to teach the girls is to not look at the score, especially at halftime,” Captain Alysha Emerson said. “That was one thing that definitely changed this weekend … [The team] was focused on coming back and winning.”

With a full roster in place, look for big things in 2015 from Laurier’s Powderpuff Football team.

After a season of multiple tournament final appearances in both 2012-2013 and 2013-2014, the Laurier’s co-ed dodgeball team finally broke through and were victorious in their first tournament of the 2014-2015 season beating their rivals, Humber Lakeshore. “[Humber-Lakeshore] is a very well coached team … they’re one of those teams that you always want to beat, too,” Captain Adam Zack said.

Humber got the better of the Golden Hawks in their second meeting in the finals, but considering this year’s co-ed dodgeball team is younger and less experienced, they’ve performed well and Zack is really proud of the team. Their last tournament of the year takes place this month and if they stick to their formations and gameplan, there’s a good chance that once again they’ll finish first.

At the very least, because the team is young, they should have a strong core of players for at least one or two seasons and continue to be one of Laurier Brantford’s best extramural teams.

The women’s soccer team for nearly a decade has been one of the best teams in all of Canada and in the regular season, 2014 was no different. The Golden Hawks coasted into the OUA playoffs,owning a 14-1-1 record at the end of the season, placing them as the fourth seed in the CIS.

All-Canadian Striker Emily Brown once again led the charge with another remarkable offensive season, tied for the most goals scored in the CIS with 21, six of them game-winners. But her offensive performance was not enough, as the team struggled in the playoffs. After winning their opening game against York University, Brown and the rest of the Golden Hawks were left off the score sheet the rest of the playoffs. Their second game was against the University of Ottawa, the team that beat them in the CIS gold medal game two years ago. Unfortunately the result was the same, losing in heartbreaking fashion, 1-0 in extra time.

With the loss, the defending OUA champion Golden Hawks dreams of repeating were crushed and for the first time since 2009 the women’s soccer team did not make it to the CIS national playoffs. What makes this even more of a difficult pill to swallow is that Brown is in her fourth year of athletic eligibility, so next season will be her last as a Golden Hawk.

Losing a player of her caliber will mean the window of opportunity to win a championship may be beginning to close for the Golden Hawks and even though the women’s soccer team has been a dynasty for the better part of a decade, their seasons have often not ended with first place finishes, a disappointment in 2015 they will surely want to improve on.

The men’s baseball team were Laurier’s Cinderella story in 2013. After seasons of mediocrity and a 2012 hazing scandal weighing them down (resulting in four forfeited games), the men came out of nowhere to become OUA champions in 2013 carried by some very impressive pitching.

With a first place mentality and championship defense on their minds, the purple and gold did not disappoint, finishing the 2014 regular season with a 14-4 record that placed them as the second seed in the OUA playoffs. In the double-elimination playoffs it takes two losses for a team to be eliminated and right away the Golden Hawks put themselves behind the eight ball, losing their first game to Waterloo, 6-3.

The guys bounced back incredibly well on Saturday with a 10-0 win against the Western Mustangs and 6-3 win against Guelph, the highest scoring team in the OUA. This set up another game against Waterloo, who once again they could not solve, losing 3-0, bouncing the Golden Hawks from the playoffs and squashing their repeat champion aspirations.

Although the overall result did not end with another trophy, there was a silver lining to the season that the Golden Hawks need to be proud of. With an overall season record of 23-13 (including exhibition, regular season and playoff games), the men finished with the second-most wins in school history.

“The end result was not what we had hoped for at the beginning of the year,” commented Head Coach Scott Ballantyne after the loss to Waterloo on the Wilfrid Laurier Athletics’ website. “Having said that, I am extremely proud of this group of student-athletes as they played hard, respected the game and have a lot to be proud of.”

The core team should mostly be intact next season, so it looks like Laurier’s men’s baseball should be in good shape for years to come.

Probably the only moment in 2014 that was a real problem for Laurier – at least the way I see it. The $58.4 million project was announced all the way back in 2012 with a projected opening date of 2015 yet they only purchased the land and broke ground this past summer pushing the expected opening date to 2017.Getting financial support from all parties has seemed to be the biggest hurdle, so even though there’s very little to show for it, Laurier Brantford students have been paying $8.00 per 0.5 credit to a maximum of $40 per term for a building that isn’t close to being on schedule and that isn’t acceptable.Students deserve a much more spacious place to exercise and more space to hang out with their friends. Wilkes simply doesn’t cut it.

And then to make matters worse, at the end of October 1,500-year-old artifacts were found on the construction site, pushing back development at least another two to three months. Ultimately, these hurdles can’t necessarily be foreseen, but overall trying to make the YMCA/Laurier Brantford Athletic Complex has been a tedious process from day one, to say the least.