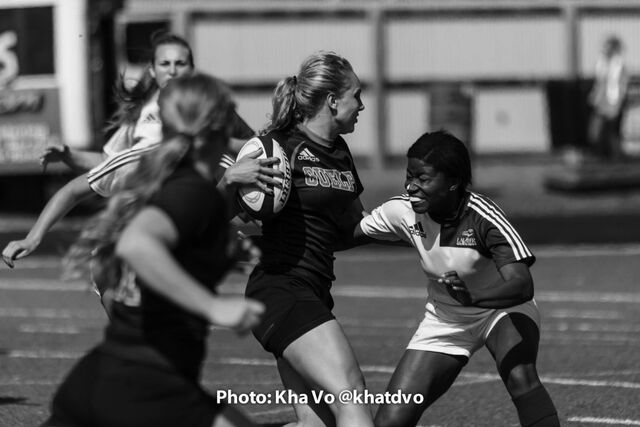 For the first time since 2005, the Laurier women’s rugby team entered the OUA playoffs with a winning record.

Starting outside centre is Tamika Marks-Grant, a fifth-year student who has been there through the women’s rugby team’s dark days.

“My first two years on the team we didn’t win a single game.” Grant-Marks said, recalling a loss to Guelph 108-0 during her first two seasons. Losing was uncommon for Marks-Grant, who won an OFSSA gold medal with Guelph high school Centennial in 2009.

It wouldn’t be until her third year on the team that Marks-Grant would finally win her first game as a Golden Hawk. The team qualified for the playoffs, but were quickly eliminated in the quarterfinals.

Grant-Marks can pinpoint a few reasons why the team has improved to 3-2 this season. “In my ﬁrst year, we barely had enough healthy girls to ﬁeld a team. This year we have a full 30 girls, enough to scrimmage with in games. The large numbers this year also help to keep momentum since we have subs for when someone goes down. This year we are more confident in our skills and our teammates. We also have about fourteen vets … who are hungry for wins.”

Saturday, the team travels to London to take on Western in the quarterfinals.

Grant-Marks described the feeling within the team when they clinched a playoff spot. “We were all excited and overjoyed. We know we are a team that can compete with the best. It has taken us awhile to get to this point where we have a real shot at advancing past the quarter ﬁnals.”

Two weeks ago, Laurier faced Western and lost 46-14. However, this has not discouraged Grant-Marks and her teammates. “We expect to win. The last game we had against them, we entered the game expecting not to perform well and that was reﬂected in the game. When we enter games with conﬁdence we are able to play great rugby. We want to come out of the gate running hard and not letting up for the full 80 minutes. We want to redeem ourselves.”

Game notes: Laurier lost to Western 64-19 on October 17th. An early injury to Laurier’s starting fullback 15 minutes in forced several lineup changes. Western gained momentum after several back to back tries and there was no looking back for the Mustangs. Grant-Marks described the outcome as “a very tough loss.”