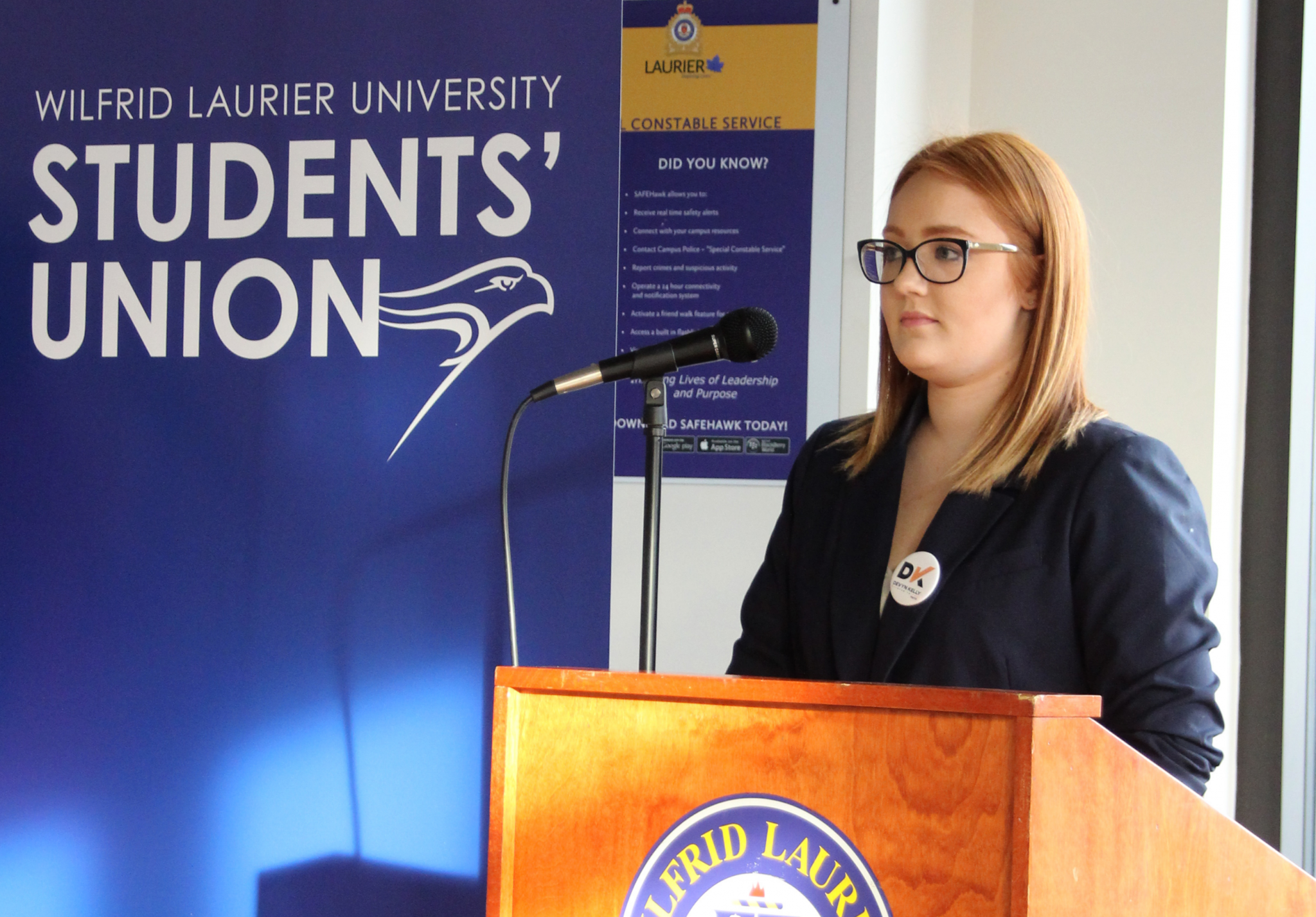 ORANGE you glad Devyn Kelly is the new Student Union president and CEO?

On Thursday, January 30th of 2020, Devyn Kelly was elected by the students at Wilfrid Laurier University as the Student Union president for the 2020-2021 school year. The reveal of the election took place at Wilf’s restaurant and bar at the Laurier Waterloo campus.

Kelly and her supporters all crowded in the room decked out in orange to show the support for her campaign. The announcement took place at 9:00 p.m. and a drum roll took over the audience. When Kelly’s name was announced the crowd went wild.

“I was in a sea of orange. I don’t think I’ve ever hugged so many people in my life,” said Kelly, “myself and my campaign manager immediately started crying, it’s kind of a blur.”

Kelly won the election to presidency by collecting 69.02% of the votes, 1872 votes in her favour which was over half the votes that were cast. This was the first race for president and CEO that was all women, making Kelly even more delighted with her new title.

To start off her presidency while still in the learning stage, Kelly will be hiring her vice president committee before her effective term date starting May  2020.

During the race season Kelly was calm, cool and collected. Throughout the last days of the campaign and while students were voting, Kelly remained confident in herself, in her campaign and was at ease even with the anxiety and excitement of the event.

“I know that the students vote for what’s best for them and at the end of the day that’s all I wanted,” she said, “ I was doing what I think is best for the student body and my opponent was doing what she thought was best and I think … if she had won, I still would have been very confident in the campaign that I ran and very proud of it.”

Kelly’s campaign is pushing the university to create a more accessible online atmosphere for Laurier students. Kelly wants to limit the amount of different websites for students such as LORIS, MyLearningSpace and others and put it into one cumulative accessible website.

The biggest plan she has in store is to draw attention to the Student Union (SU), who they are and what they do on campus.  Students are unaware of what the SU is and what they do for the school so Kelly would like more light on them so they get the recognition they deserve.

Laurier Off Campus University Students (LOCUS) often feel as though they do not get the same university experience that the students living in residence do. To help build the bridge between the seemingly separate worlds Kelly wishes to see a stronger partnership between residence life and off-residence life. Kelly wishes to work with the Department of Residence to implement the same programming for LOCUS that happens during orientation week throughout the year.

Kelly is also considering having LOCUS Dons to be Icebreakers for first year LOCUS so that off campus students have someone to talk to. Kelly wishes for this to be brought from the Waterloo campus to the Brantford campus.

The experience of going to university and living away from home for the first time is daunting. Getting used to living without parents, with roommates and surviving in a next to new world can be intimidating. Everything is different, from the course load, the student life and the city you’re in.

With Kelly’s plans first year students can feel more at ease with the transition of leaving high school and going to university. She has already been working on forming a stronger relationship between the Department of Residence and the Students Union to make the transition as easy and comfortable as possible.

As a president of one university with two campuses Kelly has the best interests of the student body at heart. She wants the voices of the students to be heard and accounted for. Kelly represents the school and all the students within it.

Kelly would also like to incorporate a greater Foot Patrol presence in downtown Laurier Brantford campus so students can get home without feeling scared or uneasy. Kelly also wishes to join the Special Constables of Laurier Brantford to give them the support of the SU.

During the race Kelly had some minor setbacks. With school, a job, extracurricular activities, campaigning and travelling back and forth between the Brantford and Waterloo campuses, Kelly was absolutely exhausted, but never once did she question if all the trials were worth it.

“This is something I’ve been pretty set on, I was very committed to it as of a year and a half ago and I’ve always said since my first year I would do it,” said Kelly in regards to her presidency.