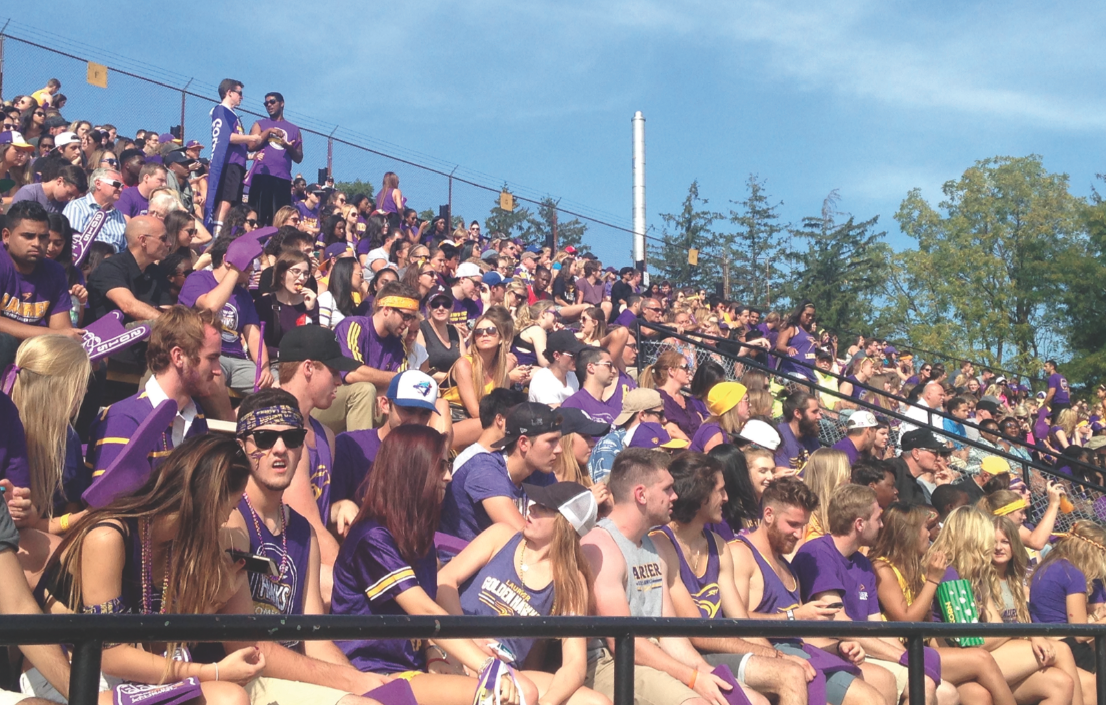 The Homecoming game is consistently the most attended football game by Laurier students and alumni every year. The stands were flooded with fans dressed head to foot in purple and gold to cheer on the Golden Hawks.

The school spirit and support was there and the score was close all game, but the Windsor Lancers ended up with the 22-18 win in the end.

Starting things off with a 2-0 lead two minutes into the first quarter, the Golden Hawks kept ahead in the score a number of times throughout the game. They generated lots of runs and were led by Laurier’s star running back, Dillon Campbell. Campbell finished with a season high 118 rushing yards.

Unfortunately, the plays that Laurier made and points that they scored weren’t enough to cover up the amount of penalties that they received, which resulted in Windsor having a chance to pull ahead each time.

“The penalties have just been killing us all game,” Campbell said afterwards. The fifth year kinesiology major was the offensive MVP of the game and plays a key role on the team.

Despite the penalties received by the Hawks, Campbell helped them to keep up with his strong offensive contributions right from the beginning of the first quarter.

Helping to initiate Campbell’s runs was quarterback Eric Morelli. He agreed with Campbell about its challenges.

“It really just came down to penalties,” Morelli said, “and not being able to finish when we got down to the end zone.”

But despite the penalties, he had a positive outlook on the game.

“I think we moved the ball well and we put together some long drives,” he reflected. “We were able to make some plays both in the run game and the pass game.”

Laurier caught up in the second quarter with a safety and a field goal. Windsor would respond, squeezing in three points on a field goal to end the half with a score of 13-12 in their favour.

The Hawks locked it down in the third quarter. Rookies Quinn Johnson and Nathan Mesher carried the team to take the lead with two field goals. Mesher finished the game 4-for-4 on his field goal attempts and won OUA Athlete of the Week.

Laurier kept the lead for most of the fourth quarter, but gave up a penalty in the final six minutes of the game near their end zone. As a result, Windsor scored a touchdown and kept the lead until the final whistle.

“We can’t dwell on this,” Eric Morelli said. “We’ve got another game this week with Waterloo and we can’t let this cloud hurt us going forward. We took this team obviously too lightly today, and we paid the price for it, so we can’t do that anymore.”

The Golden Hawks improved in time for their next game against Waterloo winning 42-0. Laurier’s win in the Battle of Waterloo helped the team bounce back and improve to 2-3. Dillon Campbell was the star for Laurier again, finishing with 241 yards on 31 carries.

Laurier still has a chance to reach the playoffs and will face UOttawa at home on Friday, October 9.