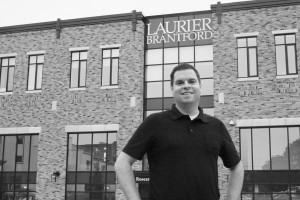 As of July 15, 2013 there will be a new Dean of Students at Wilfrid Laurier University’s Brantford campus.

In a press release on Friday, Adam Lawrence was announced as the new Dean of Students for Laurier Brantford by David McMurray, Laurier’s Vice-President: Student Affairs.

“I am absolutely delighted to announce the appointment of Adam Lawrence as Dean of Students, Laurier Brantford campus,” said McMurray. “Adam’s successive advancement in Student Affairs at Laurier, relationship with our students, staff and faculty, his reputation and regard in the field nationally, and his outstanding commitment to community will serve the Dean’s portfolio exceptionally well.”

With over 10 years of experience in other areas of the university, Lawrence most recently worked as acting Dean of Students at Laurier’s Waterloo campus for the 2012/13 academic year.

According to Lawrence, the new title was extremely exciting, but it was the whole process that really left an impact on him.

“During the interview process, I was so happy to see so many members of the Laurier Brantford community attend my community presentation, and I was so motivated by the questions and the level of engagement within the group. It reinforced my belief that the Brantford community is truly dedicated to both the well-being and experience of all students, and it made me even more excited to seek the Dean of students role.”

Earning a BA in psychology from the University of Western Ontario, and an MA in leadership from the University of Guelph, Lawrence has taken on many roles at Waterloo that will play well into his new role at Laurier Brantford including Residence Life area coordinator; Director of Diversity & Equity; and acting Dean of Students, Waterloo.

“Adam will be a wonderful addition to the Brantford Campus,” commented Dan Dawson, Laurier’s Assistant Vice President of Student Affairs. “He has proven to be an incredible asset to Student Affairs in his relatively short career at Laurier.”

Because of his commitment to students and innovative approach, Lawrence has led the development of a variety of creative programs and partnerships within the university, including the Diversity & Equity Office, Alternative Reading Week, the Diversity Certificate Program, the Hall of Nations, and the Campus Coalition Against Gendered Violence.

Lawrence will officially take up his position as Dean of Students on July 15, and will be working very closely with both David McMurray and Leanne Holland Brown, Dean of Students at Laurier Waterloo. This arrangement is meant to strengthen campus relations through senior leadership creating a strong multi-campus operational model.