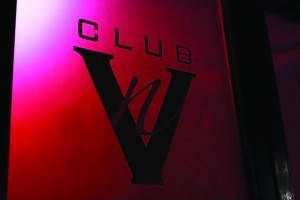 I leafed through Arthur and Junie B Jones picture books in the downtown library. I ate Super-kid ice cream cones on the benches in Victoria Park. I watched the Lion King, for the very first time, in the old Odeon Theatre. Brantford, in all it’s splendor, and all it’s squander has always been ground zero of my life. I’ve written before about the impossible magnetism it has over me; the irresistible pull that leaves me wondering about it in the dead of night. Only now, on the eve of my departure, do I understand the magnitude of that force: bags packed, trinkets boxed and posters rolled. I’m heading home, but I’m having a hard time deciphering where home is anymore. Is it where you had your first kiss, your first dance, and your first drink? If so, the answer is Brantford.

Oddly, I know for a fact that I’m not the only one. Piggybacking my way through campus tours, it became clear that the same strange draw lives on in many. Ambassadors, leading perspective students all over the downtown, had it too. I hear past students quietly admitting they’re experiencing, “Brantford withdrawal.” And I’ve seen the look of relief on their faces when they make it to the county. I know now that it isn’t just me. It has never been just me. And though I often gush, writing through my own fuzzy emotions, I’ve never stopped to analyze why? What’s so special about Brantford? It feels like I’m trying to catch the wind.

To be fair, it’s a big question. One that I’ve only managed to brace after a drink or two. You see, I have a theory; Brantford’s hodgepodge of bars in the downtown–more specifically, each individual bar–represents the many personalities of the city. 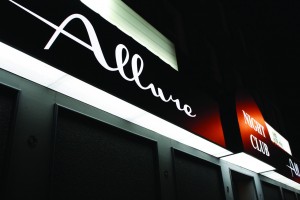 Two Doors. You walk in the front door, and immediately sit on the couches: soft, spring-less and chronically groaning. The band playing to your left doesn’t skip a beat. They wail on their instruments–chanting and strumming. A veil of utter darkness, and a three-quarter-foot raise make them seen a mile away. Do they take requests? People are screaming from the back tables. Oh god, you think, do they know something about the couches that we don’t? Guys, do they feel sticky? Really, this is just the material isn’t it? But, that seems a little… The bartender catches your eye–alarmingly handsome–serving behind a barrage of old street signs, and well past a worn pool table. He’s only mildly distressed as a woman with a bleach blond ponytail, and flat runners, grabs for his arm; pulling him in for an embrace. Well hello there! A lush in his late forties, swaying happily from drink, holds out his hand to you and your friends. “You just came out of the bathroom,” one says in a concerned voice, “did you wash your hands?” He smiles wryly and walks away. More bands mill onto the stage. The tempo changes again. It’s loud, and brash and wonderful. You feel like a badass, drinking from a plastic disposable cup, as a mild rendition of a song by the Hip fills the room.

Two Doors, you suddenly realize, is that cool cousin who wears Morrissey T-shirts to family reunions. Two Doors, it’s that lip ring you always wanted to get, but were just too chicken shit.

Piston Broke. It’s polished–pristine really–and that shocks you every time; the shiny caramel wood, and warm lighting are surreal. But, you just can’t place the atmosphere. Irish? American? Canadian? The slew of back lit foreign bottles; sparkling like sea glass, don’t help. Men, with fleece sweaters and shaggy haircuts, drink alone at the bar. Pints clink all around the room as waitresses in head-to-toe black rush around corners frantically. 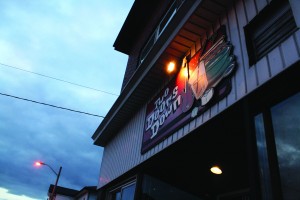 You beeline it to the back room, where there are pops of laughter, and short, crisp knocks as pool balls bound off each other. Windows and TVs are everywhere. What’s the score? Who’s playing? What sport is this? None of it matters. Suddenly you’re at a long table, with pitchers everywhere. You feel like you’re in the midst of a yuppie last supper, but instead of sharing wine and bread, you partake in Rickard’s Red, and Coors Light, sweet potato fries, and hot chili nachos. In place of disciples there’s just a slew of university students in baggy dress shirts, arguing over existentialism. Some can pronounce it; others, not so much.

But, you fall into the rhythm anyway. How can you not? The lights in Harmony Square twinkle through the clear front wall. The laughter, from all corners, acts as a strange, soothing narcotic. These people, if only for a moment, feel like some kind of kin. You know this because at any moment you feel like you might burst out in spontaneous song. Bohemian Rhapsody anyone? It’s all just so perfect.

And it hits you; Piston is like that pressed, starched blouse in your closet–absolutely flawless. It’s that patch of snow no one’s dared to walk over. A warm cup of tea your Grandma made.

Rodeo: It’s dim, and loud and hectic. Miniature pints are everywhere, sloshing around with what looks like lukewarm piss. The only lights present are strobes, bouncing around the tiled dance floor. It’s empty; surrounded by a cast iron fence–the type you’d find on a decaying house porch. No matter, you think, I’ll just sit on the outside. You’re perched on the high chair, facing directly towards the stage. Good thing too, its karaoke night, and the woman up front, belting out Love is a Battlefield, is a fantastic spectacle. You watch in wonderment as she kicks out her thick calves, flails her arms and rattles her Mardi Gras beads, threatening the whole room to challenge her. 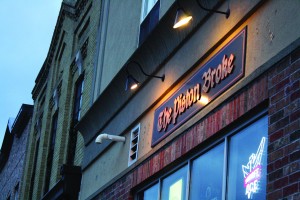 You rise to the occasion. Do you have anything by Queen? The woman at the front tilts her head. Yes–she rolls her eyes. You pick Fat Bottomed Girls, of course. The beer is weak, but after five, and not a drop less, you get on stage. Blinded by the spotlight, it begins… Are you gonna take me home, ah beside the red fire light…You hear whoops and woot woots from the back corners of the room. A sea of faces: some old and worn, others fresh and glitzed up stare up at you. Frayed shirts, jerseys and a suit jacket come into focus… Are you gonna let it all hang out? Fat bottomed girls, you make the rocking world go round… young girls pop up on the dance floor. They kick up their feet, like the woman who sang, Love Is a Battlefield. It’s such a mess–all of it. You can’t wait to do it again.

In the morning, after a strong coffee, and three extra strength Tylenols–for good measure– you say to yourself, Rodeo is that roman candle fight you never should have agreed too, but are damn glad you did. It’s that battle scar you can run your finger along, and smile.

N.V. Wub, wub, wub. Wub, wub, wub. The bass hits your first. Like a jackhammer, drilling into your eardrums. Then come the people, wall-to-wall people, in short dresses, low tops, and sporting bare midriffs. It’s humid, burning like a Californian summer, in the middle of January. You push your way to the bar. Elbow in among heavily made-up woman. Cherry red lips whistle for the bartender. Vodka cranberry, you scream overtop of the masses. That sounds about right. 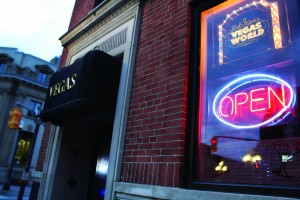 You swivel your head and see a whole slew popping on the stage–thrusting fists and shaking hips. One girl’s shoes, well they have to be at least six inches tall. Don’t those hurt? You don’t think about it too hard. The stairs beckon; carpeted in a scratchy grey material, they loop slightly to the left. You climb, and climb, only to be met with a bird’s eye view. The screams, from below, feel more like white noise now. On top, people are whispering and touching. Hands lightly grazing over bare arms. Chunky, silver bangles tap on kneecaps. The room is pregnant with expectation, drowning in its own tension. Eyes only move one way–vertically. Sex on tap anyone? You question; is their featured shot red because it’s the colour of lust? You’ll never know.

But, when you wake up in your bed, lipstick and mascara streaked across your pillowcase, tangled in your own sheets, you’ll realize that N.V. is the appletini you’ve always wanted to order. That ultra eenie-meenie, teenie-tiny, sequined skirt you keep hidden deep, in the darkest recesses of your closet.

Vegas. It cuts like a knife, deep and searing. Neon letters blink over the street. Men, smoking thick cigarettes, scream out to their friends. The words are lost in the shuffle–a car zooms by. Do I dare go in, you ponder? Of course not. Walking home, you can’t help but stare, wide-eyed, at the thin girls in white tank tops, swaying on the bar. The music, pounding like a hundred ghetto blasters, shakes the old brick. Customers, unseen but always heard, whoop and holler like animals. Do I dare go in, you ask? No. The answer is simply no.

Vegas is a car crash, rife with twisted metal–you can’t look away. It’s a burning fire, ferocious and capricious, licking at the corner of your house. You’re too smart to let it envelop you. Too smart to be that moth to the flame.

And so, here I am. Happy as I walk back from the bar; taking in every piece of the city. I’ve caught the wind, I think to myself, flushed and giddy. Can it be? I’ve tasted Brantford’s rugged culture. The funky, gritty side, I’ve always known was there. I’ve chatted cordially with its clean, pristine face. I’ve laughed, and danced with its bawdiness. Hell, I’ve sung a duet with it too. I’ve exchanged eyes with its cosmopolitan edge. And yet I know, even in a state of drunk megalomania, there are so many more. Maybe that, after all of this, is the real reason we all love this city so.