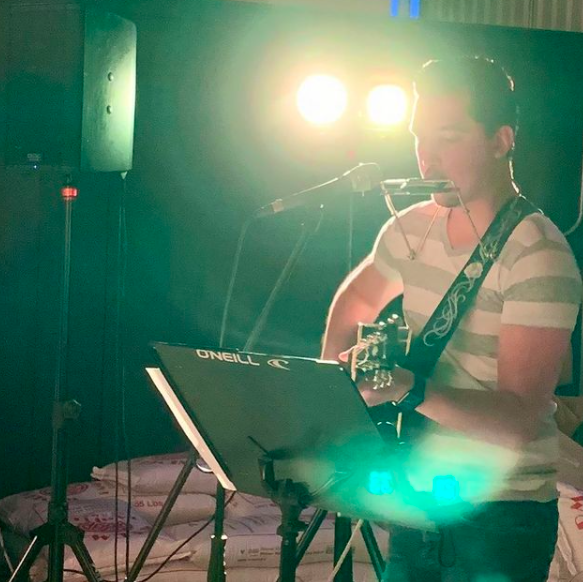 Everyone knows that Laurier Brantford is full of talented students.

Jake O’Neil is one of those talented students—he is a star among us.

O’Neil is a fourth-year Business Technology and Management (BTM) student on the Laurier Brantford campus.

Apart from being a full-time student, O’Neil is also a singer, songwriter and guitarist.

He grew up in Paris Ontario but attended school in Brantford throughout elementary school, high school, and now post-secondary.

He fills in for artists at studios, plays once a week at the Flux brewing company, and even performs at the Sanderson Music Centre on campus.

He started playing guitar at seven years old and ever since he has been self-taught.

“A game that came out when I was growing up was guitar hero […] I played it and got good at it which lead me to the real guitar,” he said.

O’Neil began his career in music by performing at school talent shows.

“I never really stood out until the shows.”

He was excited because it was his talent that made him unique.

“It was super rewarding when people would come up and compliment me because they didn’t have to do that […] I also got a lot of encouragement from criticism,” he said.

At the age of 15, O’Neil began working at a music store in Brantford called Long and McQuade and has been working there ever since. The music store has since turned into a larger establishment, opening up stores in other regions such as Peel.

O’Neil says he hopes to move higher up in the company while still performing.

He has also performed for the Cancer Society, played for the FireFighters Association of Ontario and at Blues for soldiers event.

His favourite genres are blues, soul and acoustic romance.

When asked what songs he recommends students listen to, he said, “ With or Without You by U2, 1000 x’s & O’s by Prince,  Bold as Love by Jimi Hendrix, Stand by Me by Odis Redding and Slow Dancing in a Burning Room by John Mayer.’’

O’Neil is a promising and talented musician that makes Laurier Brantford students proud to be a Golden Hawk.