How can you sleep at a time like this? 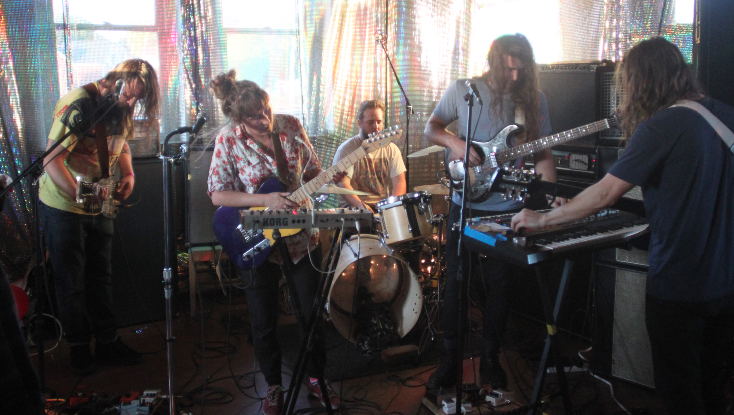 Despite its contradicting name, Brantford’s Snoozzzefest was not a show to be slept on. Tucked away in a pocket of downtown on the corner of Grey and Market St., the music festival went late into the night from September 17 to September 20. Each night featured a different collection of bands who sent positive vibes to all who attended.

The lineup featured some of Southern Ontario’s hidden talent; some bands were up and comers while others shared the status of local legends. These local legends include The Sourkeys and Transylvania 500, who hadn’t played live shows in nearly a decade.

Despite the nostalgic line up, the bands were just a chunk of what Snoozzzefest had to offer; it was also an opportunity for local artists to showcase their work.

The walls of the venue were bestrewn with psychedelic paintings all related to the festival; if you stared into some of them long enough you could get lost in the artist’s world. Eighteen pieces were for sale in a silent auction, raising approximately $1,200 for the local artists.

The atmosphere screamed creative independence and freedom; bands were selling their merch, art was being shared and friends were catching up on old times. There was even a bed where you could take a breather from the good times.

This is exactly what the organizer of the event, Chris George, had intended for Snoozzzefest.

When George took the opportunity to hold the event, he wanted to do so without the help of any sponsors, “Sponsorships can get in the way and be controlling. There’s always a message behind them…this doesn’t have a message, it’s not tied to big bucks,”.

When compared to events like the recent Jazz Fest or WTFest which took place over the summer, George felt that it was a “different beast” due to the fact that Snoozzzefest is, “less focused on the monetary potential of the artists”.

George wanted to promote to Brantford that it’s possible to throw a good show on a shoestring budget; you just need the work ethic and connections. George was involved in the shows that used to take place at the Ford Plant before it’s untimely demise, thus was able to create connections with some of the local talent.

It was apparent to everyone that the event was promoting grassroots ideals; even the bands were getting behind it. Costa Chatzis of Brantford’s own Bad Reed was stoked to be apart of Snoozzzefest because of how personal the venue was, and because of how it helped promote the artists so organically. Bad Reed has been touring Southern Ontario the last few months to promote their new release “Bad Reed EP” and try to play shows that offer the most bang for their buck.

Due to Snoozzzefest’s proximity, Bad Reed found it easy to promote the show to the public, but felt they had to be “strategic”. The self-proclaimed “culternative rock” band feel that because Brantford’s music scene is small so making friends goes along way.

London’s high energy duo I Smell Blood was also grateful for second opportunity to play in Brantford. I Smell Blood’s drummer Eric Lourenco likes Brantford’s music scene due to the fans. Lourenco enjoys that the, “locals feel the shows are worth coming to”, which reminds him of the London music scene.

I Smell Blood has a strong DIY attitude which is shown through their merchandise; the band offers custom t-shirts and vinyl that are hand silk screened by the band members and their friends. This goes hand in hand with George’s grassroots ideals.

George was excited to announce his next event, which will be on October 30. The free show will be featuring Raccoon Wedding, Crosss, New Fries and Nick Persons.