From beyond the grave: The revival of an obsession with gore 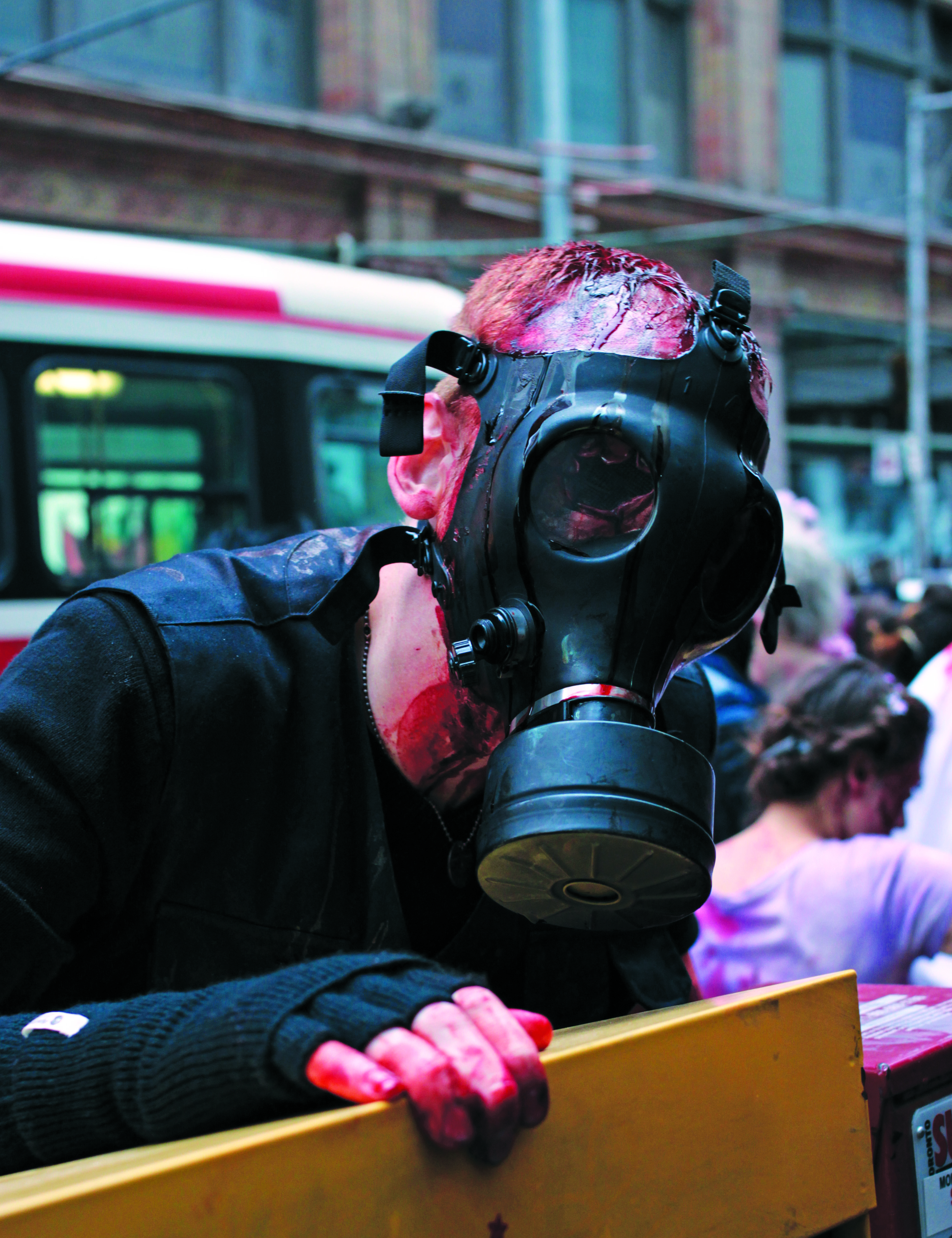 What is seldom admitted, however, is that we as humans have an inherent fascination with the things that go bump in the night. Whether horror is depicted in film, literature, or art, it is humans who create and celebrate this ghastly genre.

Dr. Andrew Welsh, Associate Professor of Criminology at Laurier Brantford, is a self-proclaimed horror aficionado. He believes exploitation films – low budget movies that acknowledge they do not have a good cast or script – present a taboo subject that exploits our human desire to view things that are not the norm. He references the philosopher Carl Jung’s term “the shadow figure”, which refers to the dark desires in every person that the public believes we should not have, such as wishing death upon someone you know. He explains that the TV screen and the couch offer a safe haven to watch something that could be very real but instead is virtually inaccessible, trapped inside a glowing box in a dark room.

Dr. Welsh said many people are attracted to anti-heroes. Mentioning James Holmes, the man who killed 12 people during a screening of The Dark Knight Rises in Aurora, Colorado, Dr. Welsh explained that Holmes had a fixation with the Joker. While the popularity of the Joker as a character was renewed by Heath Ledger’s performance, a popular critique of the original movie which featured Jack Nicholson as the Joker was that the bad guy was better portrayed and more convincing than the good guy.

“When people like Ed Gein, Ted Bundy [and] Charles Manson started to surface, this was kind of new,” said Dr. Welsh. “The 80’s and 90’s [was] when serial killers became the popular subject matter of horror films. We moved away from mythical monsters like werewolves [and] vampires, to men.”

Dr. Daniel Martin, Assistant Professor of English at Laurier Brantford, agrees with Dr. Welsh’s idea that the best horror is achieved by paralleling real fears that exist in society at the time.

Dr. Martin believes that humans can learn to anticipate and train our nervous systems by mastering the fears that haunt us through horror in any medium.

“We actually want to see the repetition of events, the cyclical development of demonic or ghostly returns,” said Dr. Martin. “We find ourselves eagerly anticipating the tensions and shocks of a genre pushing as far as possible against its own conventions, to see if those conventions will break.”

A prominent character in the horror genre today is the vampire. From classic movies such as Dracula, Interview with a Vampire, and the Blade series, to modern day examples like the Twilight series, and the television show Vampire Diaries, the vampire has no doubt undergone a makeover.

“Today, our vampires reflect ideal teenage dreams and desires, which suggests to me how incredibly malleable the vampire metaphor in horror narratives has become,” said Dr. Martin. “Our vampires today are almost unrecognizable when compared to Stoker’s Count.”

In the world of music, horror has been the inspiration for many artists during every era.

In 1956, shock rocker Screamin’ Jay Hawkins released his single “I Put a Spell on You”, in which he harnessed theatrical performances which sometimes included macabre props onstage.

Many other artists began taking advantage of the shock value of horror in their work as well. Screaming Lord Sutch, the stage name of David Edward Sutch, used a horror-themed stage show during the 60’s. He dressed up as Jack the Ripper, emerged from a black coffin, and used props such as knives, daggers, skulls, and bodies onstage. Arthur Brown, also popular during the 60’s, formed his band entitled The Crazy World of Arthur Brown. For his live performances, Brown would light himself on fire.

During the 70’s, Alice Cooper emerged as a band using a horrific onstage act. He featured guillotines, electric chairs, fake blood, boa constrictors, and baby dolls which he would chop up onstage. He also acts out making love to a “dead” woman. KISS also emerged during the 70’s, with Gene Simmons depicting blood drooling down his face.

In the 80’s, Ozzy Osbourne of Black Sabbath sang about satanism and being the Prince of Darkness, and even ate bats onstage.

Marilyn Manson, who was prominent in the 90’s, released an album entitled Antichrist Superstar, which deals with horror themes such as suicide, bloodshed, rape, and sodomy.

John Wayne, owner of Beesting Tattoo in Belle River, has tattooed many horror-themed pieces in his career.

He said a popular reason that he hears for someone getting a horror themed tattoo is the fact that they grew up with the horror movie or book in which they wish to get tattooed.

However, female vampires seem to be the most popular horror themed tattoo for Wayne. He said the art seems to carry best on both genders, and women find the female vampires just as sexy as men do.

“Whenever someone asks me to do something horror-themed, it really gets my blood pumping,” said Wayne. “All the blood and detail, that’s the shit that makes people take notice.”

Human interest in horror and gore clearly transcends every medium.

In the wise words of Randy Meeks from the film Scream: “There’s always some stupid bullshit reason to kill your girlfriend. That’s the beauty of it all! Simplicity! Besides, if it gets too complicated, you lose your target audience.”