Finally!: The Toronto Blue Jays and the plight of the millennial Canadian sports fan. 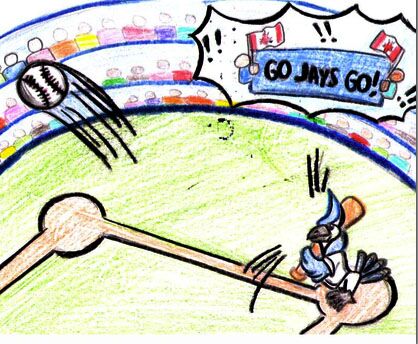 What is the point of watching sports? When do we receive payoff, when the years of suffering, monotony and losing finally give way to a semblance of something representing success? Where we can say, “I guess this was worth it, maybe?”

You no doubt know where this article is going, after all what is really left to be said about this amazing run the Blue Jays are having. And you are probably saying, “all we want is playoffs, stop talking about championships Dillon, don’t jinx us.”

But no, it’s time, time for us to get what we deserve, and we deserve nothing less than a title. I would not have proclaimed this so loud just two months ago. And granted, just to make the playoffs this year will be amazing. But we can all see what’s going on here. Whether it’s the best offense in the league (in fact one of the best ever), or the fact that they added two of the biggest names in baseball to their roster in the last month (let alone the fact that future 2015 American League MVP Josh Donaldson is a Blue Jay), the Jay’s are a team capable of winning it all. Who knows if they will or not, and I can’t wait to experience playoff baseball from this vantage point, but I think it is ok to be upset if the Jays don’t win it all this year. And how amazing is that? That after 20 years of always thinking just maybe, just maybe, we’ll sneak into the playoffs, to all of a sudden having genuine hopes of a World Series ring come early November.

If you don’t believe the hype I’m selling right now, Sportsnet reported last week that after 132 games the Jays had a record of 75-57, the two years they won the World Series. If that’s not enough to kill the cynicism that we all have for being Toronto sports fans, I don’t know what is.

Which brings me to the question pondered at the beginning of this article, what is this even supposed to feel like? And will it even be worth it? Most of us at the college age, or even under 30, have never experienced this kind of frenzy that occurs when a sports team captures the love and awe of its marketplace. Maybe you’re one of those guys that cheer for the Blackhawks or Patriots, but I don’t think that’s the same. Being thousands of miles away makes it extremely hard to replicate the feeling of what is happening now in Toronto, and across Canada.

Of course, Western Canada flirted with this, when the Canucks, Flames and Oilers all made deep Stanley Cup runs in the last 10 years, and Vancouver even started a riot because of it. But this still seems bigger, this is all of Canada after all. Anybody that cares about baseball in this country is all in. And so far, it has been worth the wait. I’ve always been a guy that goes home after work and watches the Jays, even late into August. But to have some real excitement, having a winning team playing at a high level, this is insane, and at least in the time being, I can say it has been worth the last 20 years of mediocrity.

I can almost guarantee that I won’t feel this way if the season ends in disaster, such as missing the playoffs or getting swept in the first round, or even heartache, like a World Series game seven loss. But that’s OK. The closest thing I have ever experienced to this is when the Rams won in 1999 before I was a die-hard fan, but it didn’t really mean anything to me as much as I tell people it did. Or when the Eskimos won it all in 2003, yeah seriously, you know you’re desperate when you bring up the Edmonton Eskimos.  They won, and I said to myself, “is this it?” And I suspect that most young Canadian sports fans, let alone Toronto fans or Laurier students, can identify with this. Unless maybe you’re a Saskatchewan Roughriders fan, but I don’t even want to try and understand what life must be like for them, to the point that they think wearing Roughriders jerseys to Arizona Cardinals games and putting names like Pilsnergirl on their jerseys with the number 69 is cool.

No sir, this is the real deal. The next month, and hopefully October, promises to be one of thrills and excitement for Jays fans. None other than catcher Russell Martin, a Canadian himself, after a sweep of the Detroit Tigers on August 30th said “if this isn’t the feel of a championship team I don’t know what is.”   And you have to think that as a Canadian, this is run is even more special to him.

So sit back, throw on that Donaldson jersey like he’s always been your favourite player, tell your girlfriend the rules of baseball like you’ve always been a fan, and watch as our favourite sons like Jose Bautista and Ryan Goings, (seriously Ryan Goins!) and Roberto Osuna take us on a journey towards baseball immortality. There will be haters, there will be those annoyed and saying Canadians don’t know anything about baseball and others complaining that they turn on the TV and its “always the Jays, like seriously there’s an election going on and all they can talk about are the Blue Jays, like there isn’t a world crises going on in Syria right now!”

But do not be fooled! Don’t let your heart be hardened. They do not understand your plight. But we do. I do. Blue Jays fans lets arise, and as one, for Canada, for John Gibbons, for Canada, for Toronto, shout, “OK Blue Jay, Let’s Play Ball!”