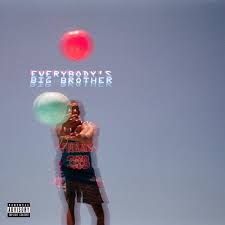 The moment you pop your headphones in and click on “Off/Beat”, you are serenaded with a hypnotic siren song reminiscent to Pink Floyd’s “Great Gig In the Sky”.

“Off/Beat” is the first song off of Chuck Inglish’s production-heavy new album Everybody’s Big Brother to be released. The only big names on Inglish’s sophomore album are Asher Roth and Donnie Trumpet, giving way for an amplitude of underground rappers getting the opportunity to bless your eardrums.

Chuck Inglish showcases his production ability by producing the entire 12 track album. The album has many unique samples and all the beats have something different.

Inglish experiments with different styles of beats that provide different vibes to the listener. There’s trap beats, progressive beats, and the occasional chillin’ beat; if one listens to “FTW” and then “Satisfied”, they’d have trouble believing the same person created the beats. The beats vary in bpm (beats per minute), energy and overall vibe, allowing Inglish and his features to drop different flows on each track.

Inglish takes advantage of this; his raspy voice moves differently with the tempo of every song. On some tracks, Inglish grooves slowly, like on “Several Dozen”, and on some he rapid-fires a barrage of bars like on “Bangin’ on Waxx”.

Everybody’s Big Brother lacks any clear meaning, but one can see that Inglish had fun with the album. His wordplay is whimsical, but one is still able to to take him serious.