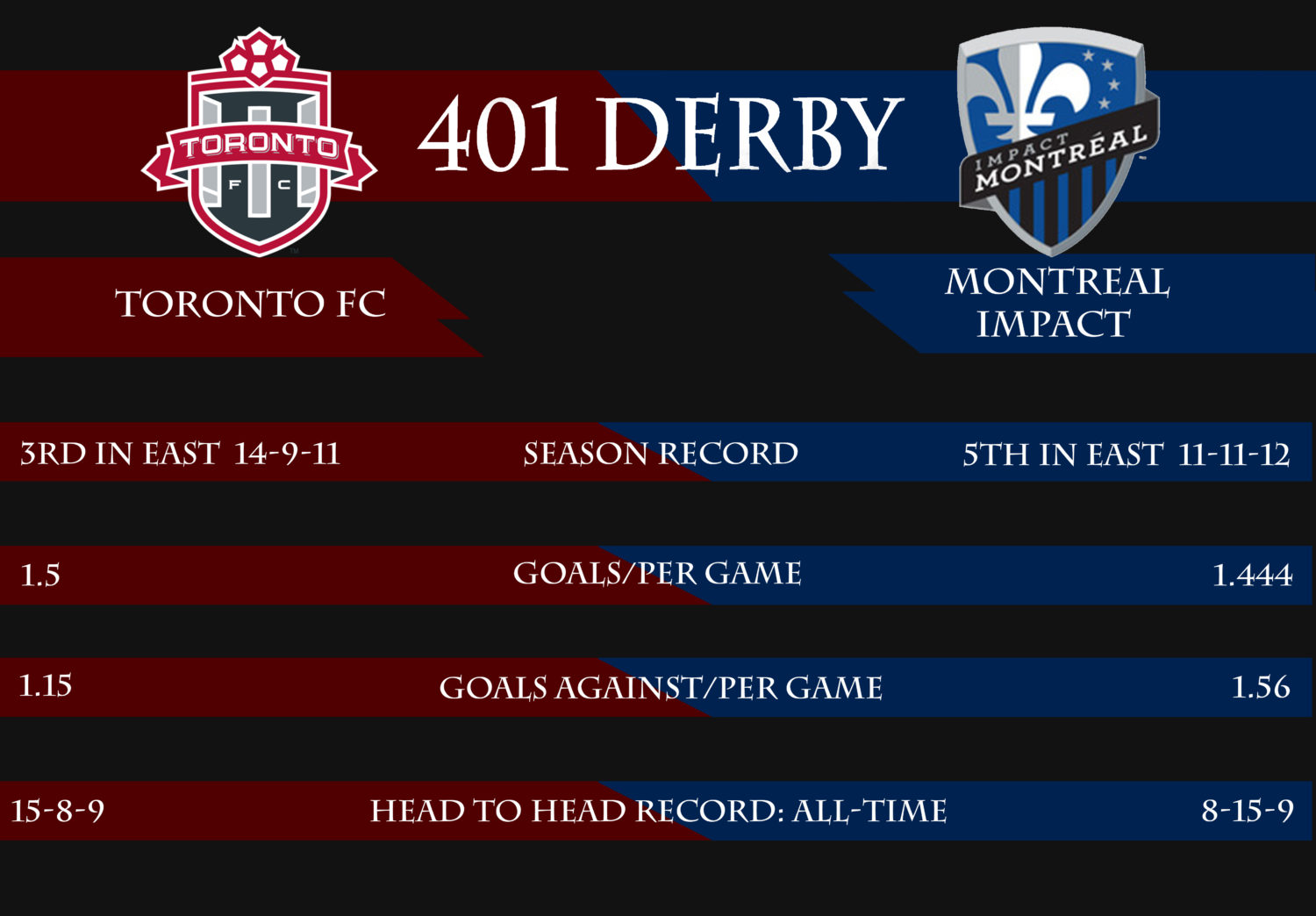 Toronto FC and the Montreal Impact are preparing for their 13th and 14th meetings since the start of 2015. Toronto has held the edge over the last two years with a record of 5-4-3 in the series.

These teams are no strangers to meeting each other in tense matches after meeting in the playoffs last year, as well as in five consecutive Canadian Championships. Montreal gained the edge last year winning 3-0 at home in the first round of the playoffs.

The reason this year could end very differently is the additions Toronto made to their defence since last winter. The team switched to a back 3 and completely changed the line-up. Drew Moor was signed as a free agent and has been at the centre. On his left Nick Hagglund, the 10th pick in the 2014 draft, took over the starting job near the end of his third season. On the other side Eriq Zavaleta has become the starter in his second season in Toronto after arriving in a trade. Goalkeeper Clint Irvin arrived in an offseason trade from Colorado and has only allowed one goal so far in three playoff games.

It feels like it should be a crime to get this far into a story about these teams without mentioning the dynamic players both teams have on offence. Sebastian Giovinco and Ignacio Piatti tied for third in the league with 17 goals each. The difference between the two can be seen in their playmaking abilities. Giovinco finished the season second in assists with 15, while Piatti finished with six.

If you’re looking for secondary options on attack both teams have elite options beyond their stars. Jozy Altidore scored 10 goals for Toronto this season and has scored an additional three in the playoffs. Tosaint Ricketts joined Toronto in July as a free agent, he provides a speed element to the attack off the bench.

Montreal will most likely rely on Matteo Mancosu to continue his strong play in the playoffs, having scored three goals already. Didier Drogba will most likely be a sub off the bench. Drogba appears to have lost the battle with father time as the 38-year-old missed time due to injuries and only played in 22 games this season.

Prediction: With a new defence and goalkeeper Toronto should be able to limit the Montreal offence. Betting against Giovinco to generate offence is a bet you make if you’re okay with losing money, which I’m not. Toronto has only lost two of their last 19 games and I think the run will continue with a 3-1 aggregate win over Montreal.