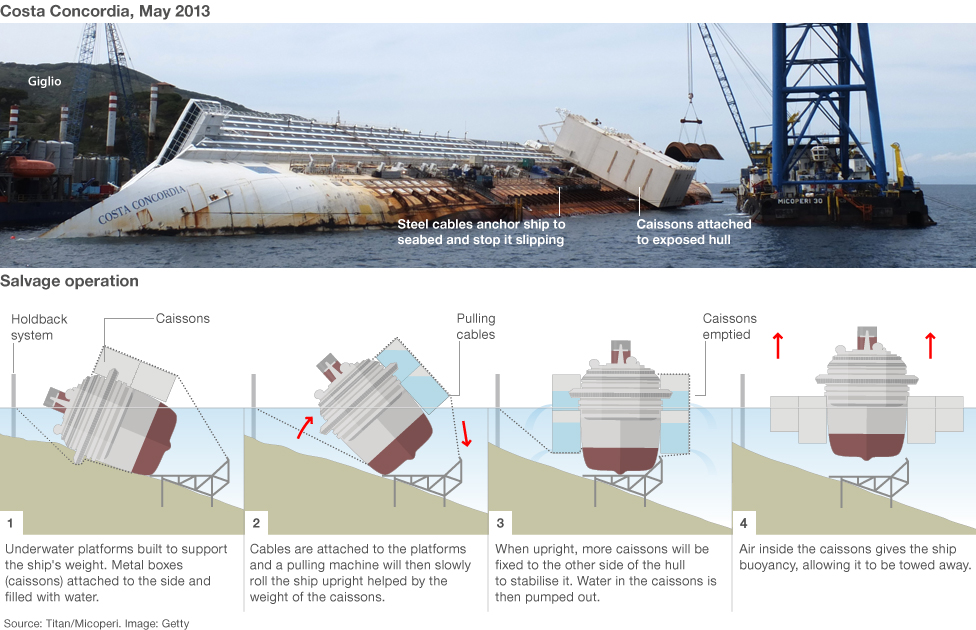 After sitting on an angle for over a year, the shipwrecked Costa Concordia underwent one of the most daring and expensive salvage operations in memory.

Experts say that a salvage attempt such as this has never been attempted so close to land before.

The operation began early last Monday which was delayed when the remote operating barge being used in the salvage was put off course by a major storm, said the Italian Civil Protection Authority in an interview with the BBC.

From the barge, engineers were able to work using pulleys and counterweights to move the Costa Concordia.

Engineers finally succeeded in pulling the Costa Concordia completely through a grueling, 19-hour operation. The operation will now allow a new search to be conducted looking for the two bodies that were never recovered from the wreckage over a year ago.

The capsized side of the Costa Concordia was put through significant stress from the weight of the ship and the operation itself.

The damage obtained must be repaired before the can be towed away to be turned into scrap metal, the estimated time is somewhere in 2014.

The Italian, luxury cruise ship, Costa Concordia, ran aground on the island of Giglio near Tuscany on January 13, 2012.

The ship was on its first leg of a tour around the Mediterranean Sea, leaving from Civitavecchia, Lazio, when it was grounded.

Five people have been convicted of manslaughter in connection with the wreck.

Schettino is currently on trial for manslaughter and abandoning ship.