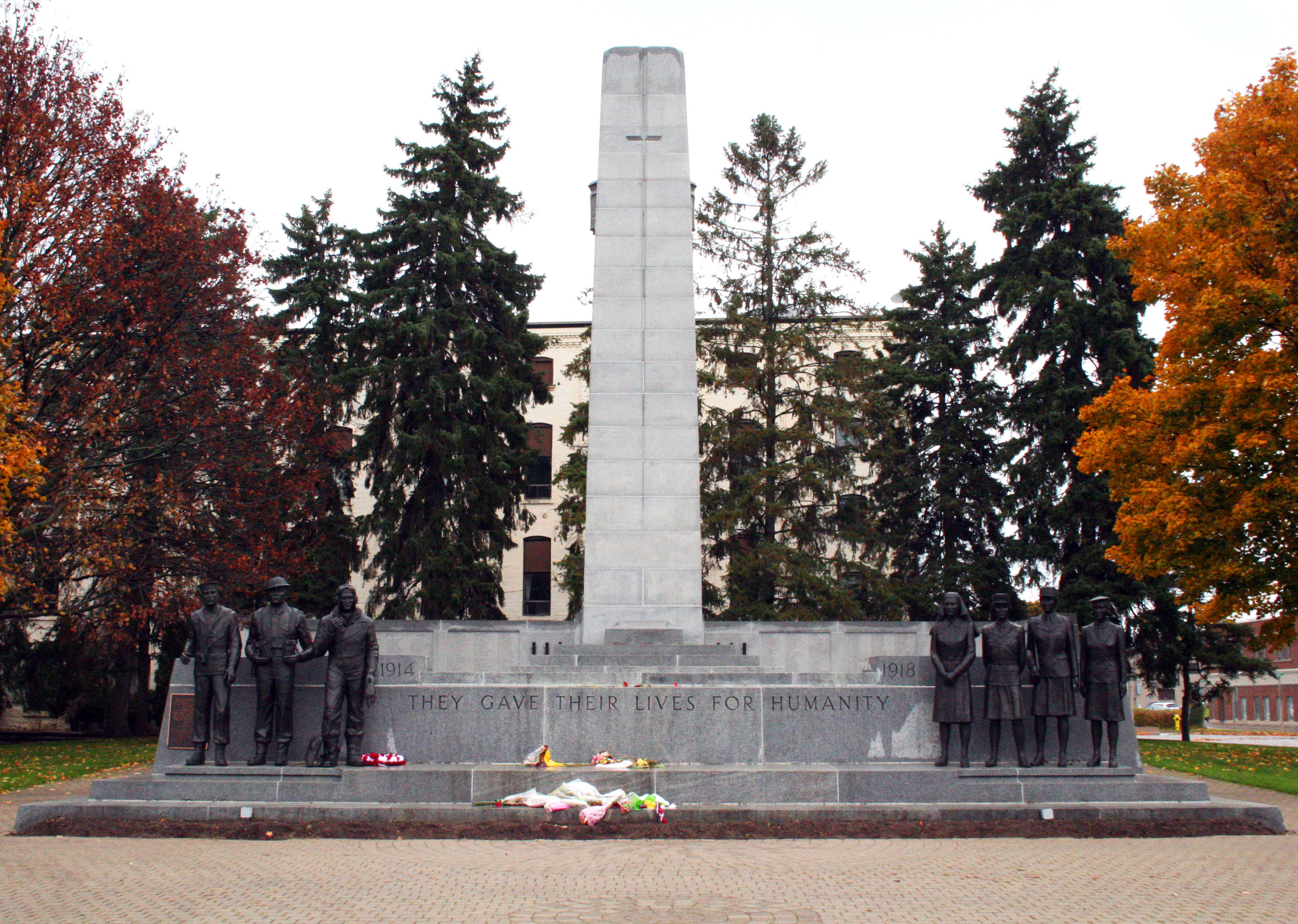 Remembrance Day is just around the corner, and community members hope to see more student consciousness this year.

Local history oriented non-profit groups have put together a number of initiatives to make the story of war and Brantford more accessible to the community.

“Your history matters” is the slogan that acts as a charming reminder of the role Brant Historical Society plays in the local community, creating an inclusive space in which curious onlookers can absorb the narratives that make Brantford, Brantford.

The final tour of the year will be hosted on Saturday Nov. 8, starting at 10:30 a.m. Titled “Monuments and Memorials” walk, the trek is one of the steadfast annual tours hosted by The Brant Historic Society.

The “Monuments and Memorials” walk is hosted close to Remembrance Day in November each year to help familiarize participants with local historical war landmarks throughout the city’s downtown, and to help participants better understand the profound role war played in the development of the community.

Brian Moore who coordinates the tours says that the walk will focus on eras surrounding the Boer War of 1900 all the way to the 1950s.

Moore explains that this year alongside essential memorial sites like the Armories and Cenotaph, the tour will take a new route, exploring sites like the Red Cross, Church Street, and the Returning Soldiers Home.

“People walk by these memorials quite regularly and often have no idea what the story is behind them,” says Moore.

Brant Historic Society’s walking tours are free to Historical Society Members, and $5 for non-members. The walks typically run between 75 to 90 minutes in length.

Moore encourages university students in Brantford to attend heritage walks in order to garner a better sense for the local flavor of community they are living in. “Each walk has an element of its own character,” explains Moore, “and reveals something of the character of the community.”

“I’m not sure that I can tell you that there’s a popular walk,” says Moore, explaining that the monthly events typically draw crowds between nine and seventeen people. “But there isn’t a walk that I have taken where there aren’t people afterwards saying, ‘Wow, I didn’t know that!’”

The Canadian Military Heritage Museum on Greenwich Street is looking forward to an increase in patrons this month as Remembrance Day draws nearer.

The non-profit museum has been running for the last twenty years. The 14,000 square foot building is host to 20,000 artifacts with over 10,000 in storage and represents a history of Canada’s military endeavors from 1775 to today.

“We have a theme room every year”, says museum chairman Richard Shaver, “for the last two years it was the War of 1812, we took that down this Spring, and we are now honoring the century of the First World War.” The exhibit will run for four years, changing each year to highlight specific eras of the war. The current exhibit is stocked with artifacts from the Brant community.

Honour Roll plaques from community businesses garner the walls throughout the museum, reflecting the names of thousands of locals who left their industrial jobs to answer the call of war; photos hang showcasing the youngness in the faces of local soldiers throughout time.

Anywhere from twelve to fifteen thousand people visit the museum each year, says Shaver, although it’s still tough to draw in students.

The museum offers guided tours, as well as the opportunity to explore its artifacts independently. Filled to the brim with stories that represent many facets of the local community during war initiatives Shaver explains, “These are all stories that can be heard, if kids came down.”

“It’s a big museum, and it’s a good museum,” says Shaver. The exhibits aim to educate viewers about the realities of war while honouring the fallen and appreciating the efforts of veterans and current military personnel.  According to Shaver war is an integral part of the community’s fabric, and students who want to know more about the sacrifices that contributed to the Brant community as it is today.

Shaver is disheartened by the lack of interest he sees reflected in the number of youth who patron the museum, “young people walk around without giving any interest whatsoever to what sacrifices were spent.” Alongside the thousands of artifacts on display, the museum maintains a Military library, which Shaver says is yet to see the face of a Laurier student, “they just haven’t got the interest,” says Shaver.

During its winter season, the Canadian Military Heritage Museum operates Friday through Sunday from 10 a.m. to 4 p.m.

Brantford’s Remembrance Day Ceremony will take place around 10:45 a.m. on Nov. 11 at the Cenotaph across from the Armories on the corner of Brant Ave and Dalhousie St.