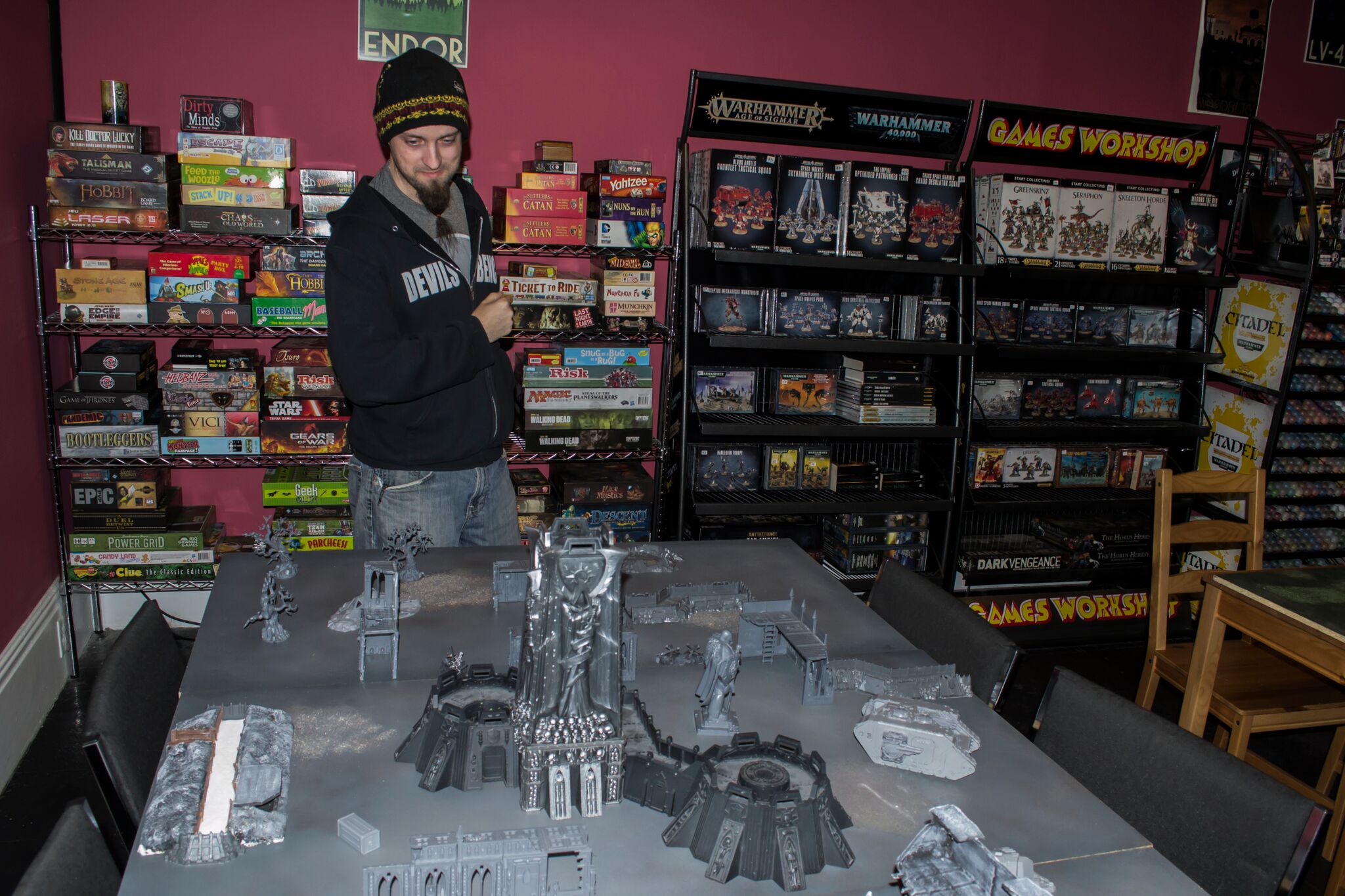 Brantford’s downtown is home to a wide variety of shops and small businesses. These businesses define Brantford, but what defines the businesses? This is the inspiration behind “Clerks”; getting to know those who know us so well. From our shoe size to our favourite item on the menu, these business owners make us feel more like family than customers. With that being said, let us shine the spotlight on Alex Kirley, co-owner of The Devil’s Bench. 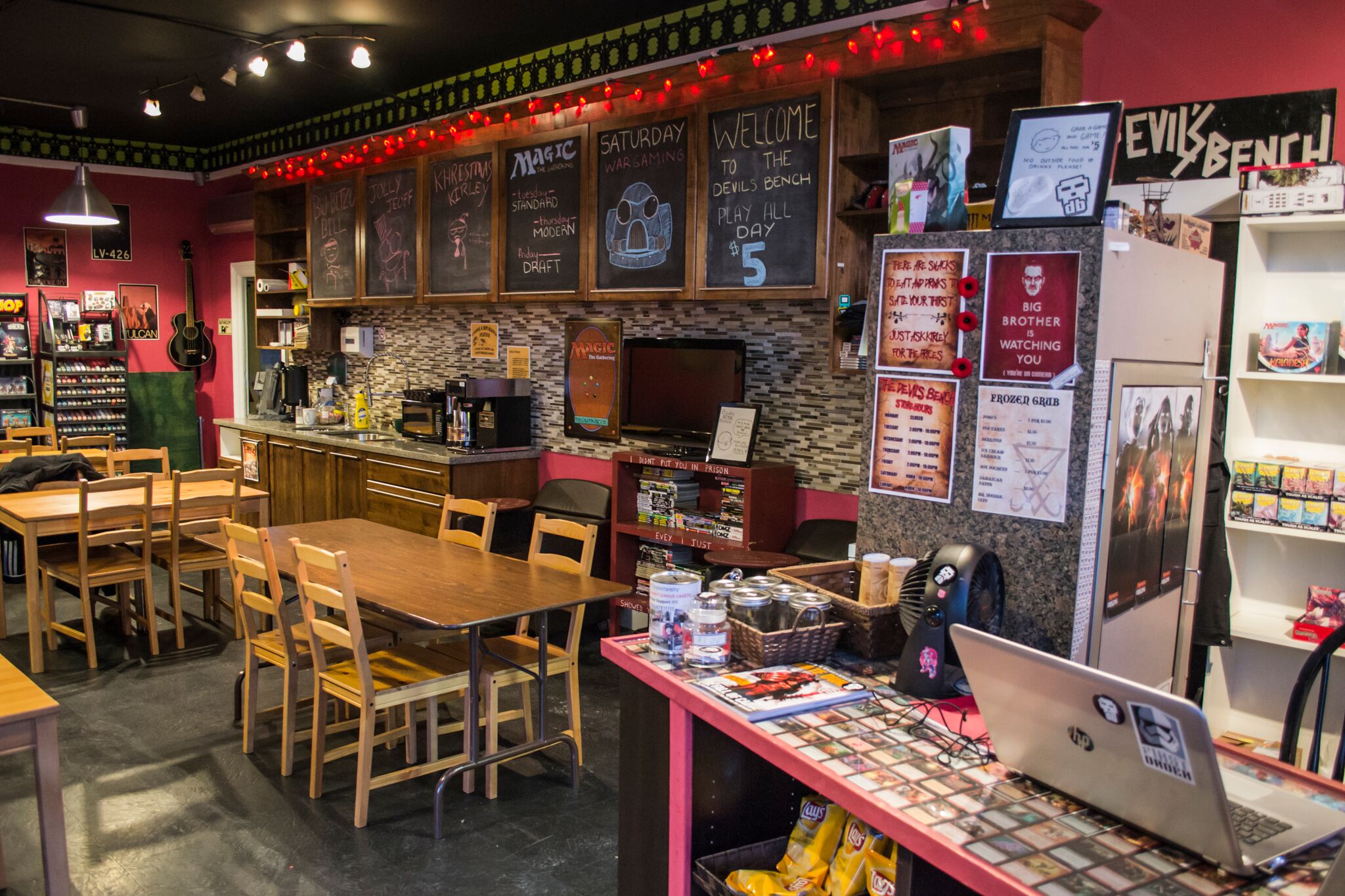 What exactly is The Devil’s Bench? It says gaming cafe online but it seems like more.

It’s more of a hobbyshop than a gaming cafe. Have you ever seen Angels in the Outfield? It’s that; if you build it they will come. And that’s what this place is all about. If you build a house for people, especially in niche communities, that usually get ostracized for participating in those niche communities, as soon as you build a home for them, they’ll come here and they take care of themselves. They just need a place to call their own. And that extends to board games too. Board Games are back in a big, bad way. Producers like Fantasy Flight and Flying Frog have come out with these great titles that are a step above your Monopolies or your Scrabbles, something you can sit down and spend two or three hours doing and still have fun and be very engaged. A lot of people shy away from that though. A lot of people look at those numbers and the content available, whether it’s slaying the dungeon dragon, being the dungeon master or going after the goblin king they immediately hear that, put two and two together and don’t want to do it anymore. Just because it brings along this stigma; everybody hears Dungeons and Dragons and automatically that becomes a trigger word for people and they want to stay away. They don’t want to be associated with that. Here it’s the exact opposite, you come in here and talk about Dungeons and Dragons, we’ll gab for hours. And it’s all about just building a home for those people.

Do you think that Stranger Things has made Dungeons and Dragons more popular recently?

Every once and awhile we’ll get something like that. If a new release comes out in Hollywood and it’s a blockbuster. Right now everyone wants to play Star Wars because Rogue One just came out. Hollywood and media definitely play a part in igniting people’s passions for the different esoteric titles.

When did the shop open up?

April 4, of last year. So this April 4 will be our official two years of being open.

How does it feel to be the first gaming hobby shop in Brantford?

It feels great, but moreso over planting the flag down and saying, “I was the first”, it’s a much better feeling when I see a table of two guys and I see another table of two guys. They give eachother the eyeball and it’s like a grade eight dance with all the boys on one side and all the girls on the other, and nothing happened until the one pair got together. That happens here all the time. There will be two tables of two, they start to make eyes at eachother for awhile, they’ll end up picking up a game, playing it together. Before you know it, this place closes and they’re off to the bar to get a drink together. New friendships have been forged, that’s what this place is all about.

Where did you get the idea to open up The Devil’s Bench?

I was sick of cutting sheet metal. I went to Mohawk College for television broadcasting. I graduated with honours, I was a good boy, I did my homework, but I graduated right into the height of the Canadian recession. There was no work in my field and I ended up cutting sheet metal for five years. After a while I was sick of it and decided to pursue my passion. I was in Hamilton at the time and there is so much competition in Hamilton: there’s Black Knight Games, Gameopolis and a couple more board game cafes opening. And they already have “the people” so to go into that market is really, really tough. All my friends lived in Brantford anyways and I noticed all the hobbyist and niche hobbyists from Brantford would have to travel to Hamilton, Paris or London, to where all the game shops were. Prime location, let’s see if anyone comes out. We now have Magic communities, Dungeons and Dragons communities, Pokémon communities, online communities, it’s awesome, I love it.

How many different gaming communities are there in Brantford?

It’s weird, you’ll have your major groups of gamers: your board gamers, card gamers and tabletop warfare. In each of those it branches out like a tree diagram. For your card players you’ll have: Yu-Gi-Oh!, Magic, Pokémon, Cardfight!! Vanguard, all of these little subcategories. For tabletop warfare you’ll have Flames of War, X Wing TIE Fighter, Warhammer 40,000, it just keeps going down the list. So I’d say there’s at least 20 to 25 subcategories of these major niche nerd factions that come in here all the time. 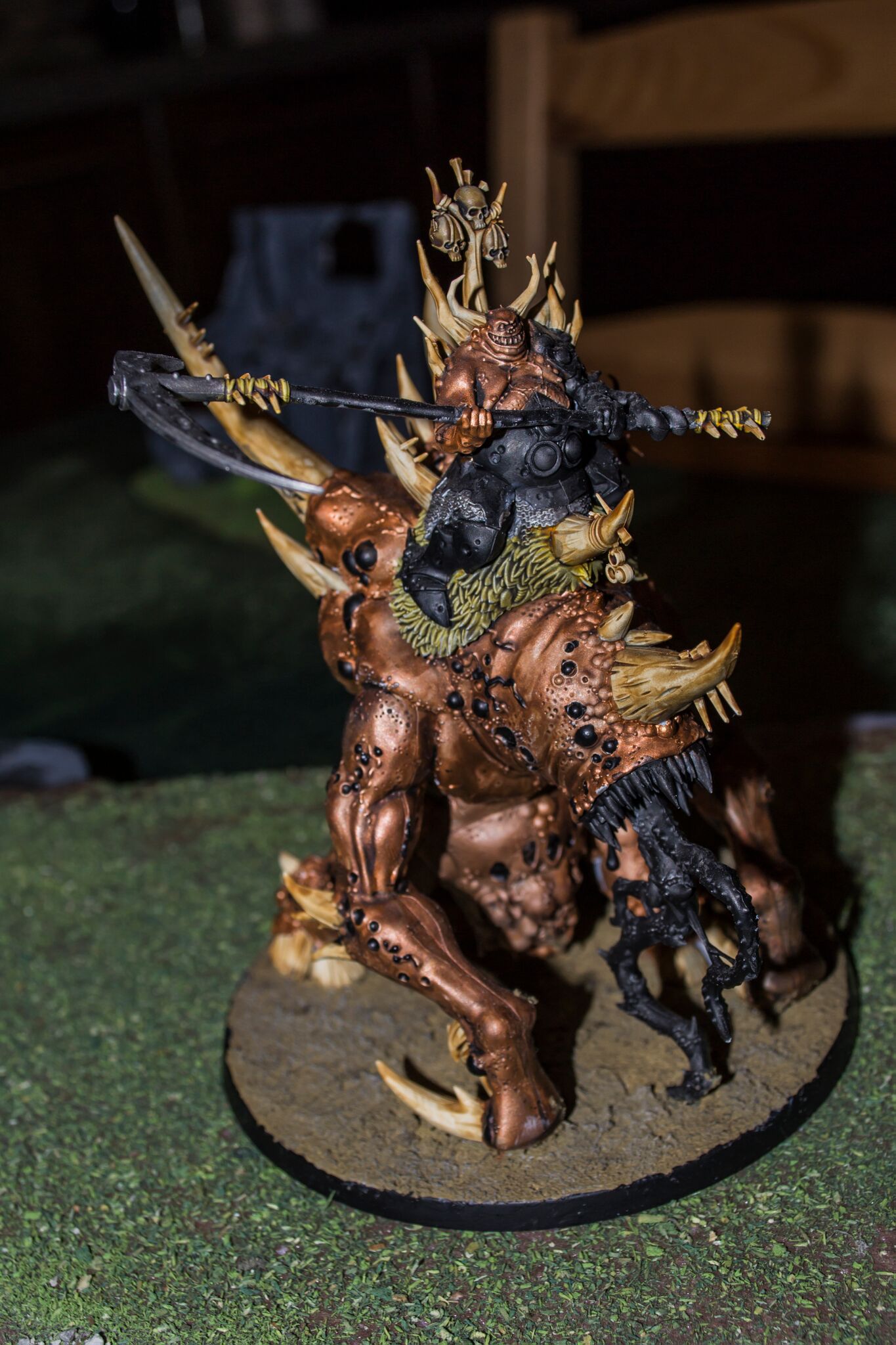 What’s the most popular game that people will play when they come in?

Magic was the biggest when we first opened, it’s been going since like ‘92 or even earlier. It already has this huge following. As soon as the Magic crowd learned that Magic was here finally in Brantford after being on hiatus for so long, Magic players flooded this place. Right now the war gaming computer is the big push here. On Saturdays and Sundays I set up the big six by four tables and populate it with terrain, roll some dice and have some tactical fun.

What is the most expensive or rare game piece have you had in the shop?

We just gave away a $240 card for a raffle. It was an Expedition Polluted Delta from Magic the Gathering.

What’s the hardest thing about running the Devil’s Bench?

Rules. Oh my goodness. It’s the classic example of the goldfish in the bowl going out into the ocean. In my little bowl of friends, I was the goldfish that knew all the rules to the games, and then I got into all of this and from across the room I’ll hear, “Kirley, what’s the save on a T4 Terminator going into close combat with a plus four wraithknight?” I don’t know! I have no idea! So getting into rules isn’t a bummer, but a challenge.

What’s your favourite tabletop game to play and why?

Warhammer. I’ve been a Warhammer fanatic since grade six. It’s always been my jam. I love tactical warfare games, moving your tanks up the field, covering your flanks, I’ve always had an eye for that. I love it. It’s great, it helps me relax at the end of the day to just throw on Netflix and paint a model. I love listening to podcasts so that’s great background music. Yeah, I can’t get enough. It’s my joy, it’s my escape.

Last time we spoke it was about The Devil’s Bench podcast. How’s that been going?

They’re doing good. One of the guys, his wife is about to have a kid so they’re about to go on hiatus, but we still get people from all walks of life to either interview about local Brantford businesses or nerd culture. They’re still going strong and they still have smiles on their faces.