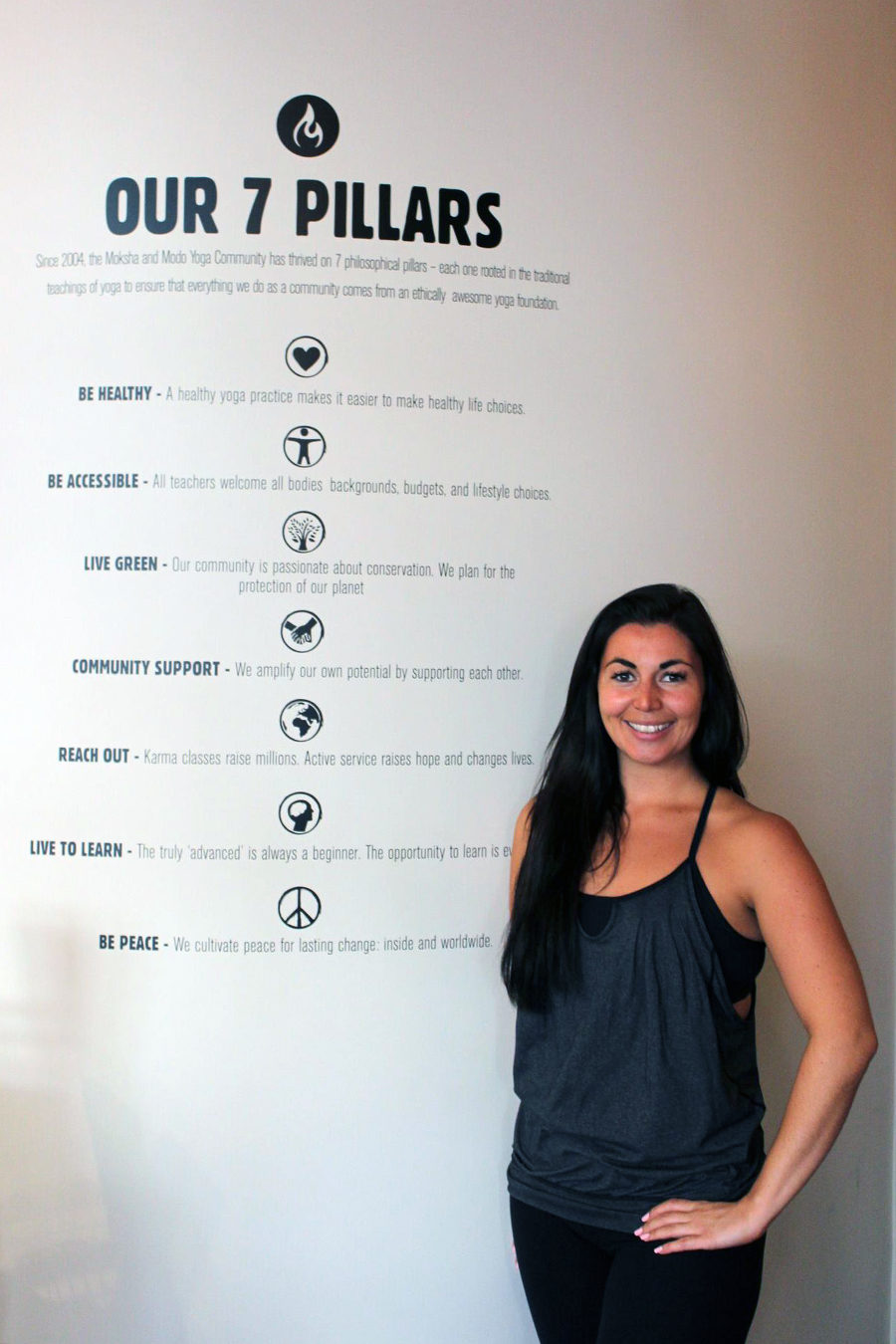 Brantford’s downtown is home to a wide variety of shops and small businesses. These businesses define Brantford, but what defines the businesses? This is the inspiration behind “Clerks”; getting to know those who know us so well. From our shoe size to our favourite item on the menu, these business owners make us feel more like family than customers. With that being said, let us shine the spotlight on Emily Dwornikiewicz, Wendy Dwornikiewicz and Markus Schneider, owners of Moksha Yoga Brantford.

For those who don’t know, what is Moksha Yoga and what are you all about?

Markus: We’re a hot yoga studio in downtown Brantford and we teach hatha yoga, which is based on yoga therapy principles. We also teach vinyasa, which is another way of saying flow, and we’re a community that really puts emphasis on mindfulness, so becoming aware of yourself, your body and the world around you, so you can make the world a better place.

Moksha recently celebrated its one year anniversary, how does it feel to have made it to that milestone? Did you expect to make it this far?

Emily: Well we had definitely hoped to make it to one year. We hope to get to ten or 20 years. But it was definitely cool. I think the coolest thing was getting to see the community that’s cultivated here over the last 365 days. Even the community in the first few months is so much bigger than we had anticipated. Like last year at Christmas we supported a local family. We had hoped to get a few presents in, and we were blown away; the whole lobby was filled with gifts. We had another local business come on board with it, and that was only after being open for like two months.

Markus: There’s an initiative that we’re doing again this year and we’re to provide gifts for 30 families.

Practices such as tai chi and qigong are considered by many as martial arts. Would you consider yoga a martial art or something more along the lines of a lifestyle?

Emily: In the form of it being a meditative movement, anything can be meditative: walking, doing your hair. You can tie it into anything. I think a lot of people with tai chi find it very relaxing and meditative for the body. So in a way of yoga like that I would say absolutely. But as far as similar movements or the end goal, yoga is very different. There are people who arrive on their mats for meditative purposes. Usually the main draw in is injury or the physical practice. And what stems from that is the benefit for the mind and the benefits you carry off of the mat. Like when you’re stuck in traffic driving to Hamilton; you can breathe. And you’re not getting anxious from the hundreds of other people doing the same thing as you. But you take your yoga off the mat and you deal with it. Life becomes easy and more enjoyable.

Wendy: Sometimes it’s just teaching people the tool of breathing. I know we all think, “Oh, I can breathe. I breathe to be alive.” But a lot of times we don’t and when we do get into those tight situations whether it be traffic or an argument with somebody, that’s when we begin to tighten up and not breathe. We tend to bring that out into the classes.

What would you consider the correct way to breathe?

Markus: What a lot of people don’t understand about breathing is that it is directly linked to your nervous system, so when you’re not intentionally breathing with purpose, you’re taking short, shallow breaths. If you want to get scientific about it, you’re taking about a litre and a half of oxygen into your body. When you’re intentional about breathing, you increase this by about two and a half times, so about four litres of oxygen coming into your body, which really calms your nervous system. It oxygenates a lot more blood into your body which allows your organs to function better.  It allows you to think more clearly, it allows you to calm your nervous system, so you’re not in that “fight or flight” response, you’re more in that “rest and digest” response. So everyone knows how to breathe. But we’re not necessarily teaching people how to breathe, we’re teaching them how to breathe in a way that benefits their body: by taking deeper breaths in and deeper breaths out.

Markus: You have to be careful, because an individual dealing with mental health is going to respond differently, but as a whole, in the general setting, calming your nervous system allows you to experience a lot more relief when dealing with mental health. Mental health affects the body, but the body also affects mental health. So if you’re taking care of your organs, you’re taking care of the body the way that it works and you start to feel better in a physical manifestation. Your mental capacity to experience life more enjoyably increases. And in the opposite way because your nervous system is being calmed and relaxed while you’re practicing yoga, you don’t spend so much time ruminating about repeat thoughts. You’re thinking about fresh thoughts and thinking more clearly and that relieves a lot of tension that builds up from somebody who’s struggling with mental health.

How has yoga affected your own mental health?

Markus: It has affected me in a severe way because I deal with depression and anxiety. It’s been an amazing coping mechanism for me to be able to address that I’m experiencing this.

Emily: For me, I can feel when I’ve gone too long without stepping on my yoga mat, I feel anxious and unsettled, and I find that as far as work productivity. When I get practice in and go to work on my tax list or my emails, it’s so much more seamless than if I’m just trying to rush around and do things without my practice. So mentally, my body feels calmer.

Wendy: For myself, I was a person with lots of busy thoughts and I’d be busy thinking about stuff. Through yoga I learned that’s okay, but it’s so much better if you can just calm down your mind and just focus on right now.

The Huffington Post published an article about how meditation doesn’t work, with one of their main arguments being that you “can’t meditate the past away.” How do you feel about that?

Emily: I was listening to a podcast about a girl who was abducted in Syria. She had crazy PTSD, and one of her coping mechanisms was meditation. She knew everyday that those thoughts would happen, but through meditation she was able to pull forward from it. We’re all in agreeance with the Huffington Post, you can’t meditate away the past. Nothing can erase the past but just moving forward from it and being aware of it. I think it’s a great tool for coping with being ok with the present and being optimistic about the future.

Markus: I don’t think there’s ever been a meditation teacher that has tried to meditate away the past. There’s a big difference between trying to get rid of something and allowing something to exist. Meditation is the practice of allowing things to be as they are, so you can be empowered in that moment to live in the future without being impacted, whether knowingly or unknowingly by the past. It’s a huge difference. When you talk about meditating away the past, that’s not an initiative that anyone’s trying to do in this practice. Allowing that past to exist there and recognize that the past doesn’t define whom your are in this moment allows you to live a completely different life, which negates the past. The Huffington Post has also written very powerful articles supporting meditation so I was surprised to hear that.