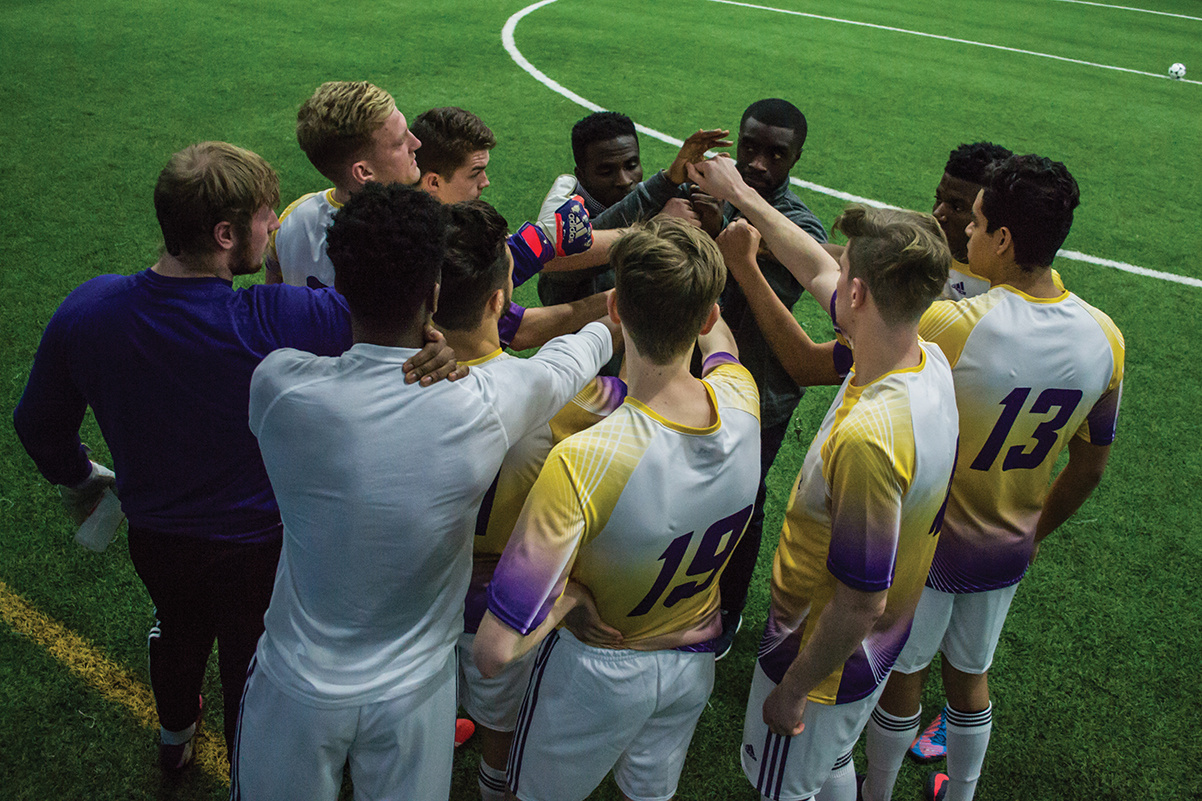 A humbling 5-0 loss to George Brown eliminated Laurier Brantford’s men’s soccer team, but the team still advanced further than ever before.

The Golden Hawks advanced to the quarterfinals when they visited George Brown for a tournament on Feb. 2. The defeat left Laurier in a two-way tie for fifth out of the nine participating teams.

A rough start against the Huskies resulted in Laurier allowing a goal in the opening moment after some nice ball movement. After some strong play on both ends it looked like Laurier would have the chance at pulling off the upset before a goal off a turnover gave George Brown a 2-0 lead with five minutes remaining in the first half.

After the half, the Huskies scored a third goal on a controversial call as a player appeared to jump on the Laurier keeper Pasquale Centritto’s back to head in a goal. With 90 seconds left in the game the Golden Hawks gave up two more goals making the final score 5-0, as the final margin was not revealing how of close the game was. 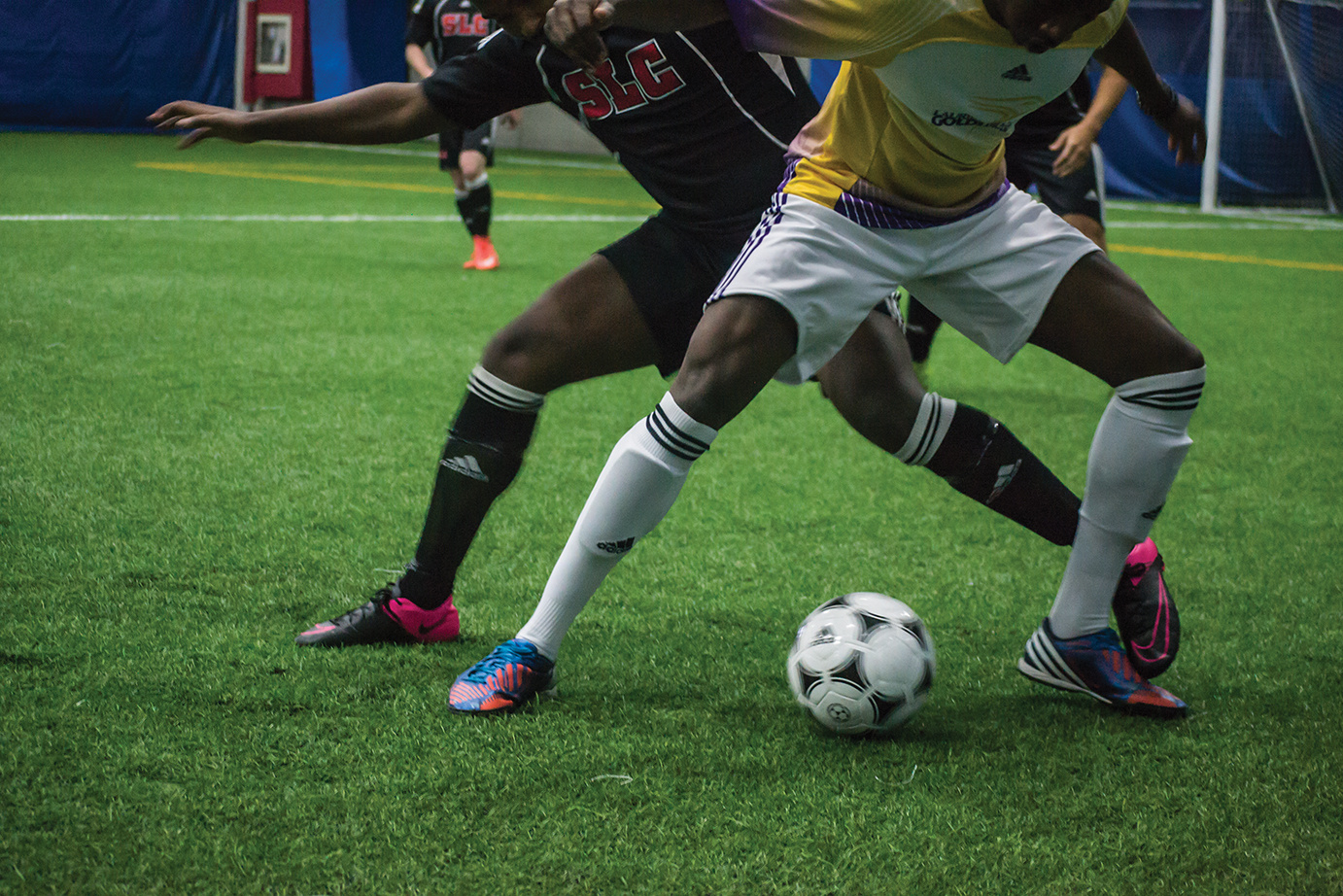 Although the team was eliminated, Head Coach Murphy Wiredu has his sights set on the larger picture, “We’ve gotten better from the last tournament, we’ve advanced to the quarters. […] All of this is just a stage, getting ready for regionals is what we are building towards. I’m very happy today for us to be where we are”.

To advance to the quarters Laurier first had to beat St. Lawrence College (Cornwall) after failing to win their group and earn the bye that came with it. Laurier dominated possession and find the back of the net often, winning the game 5-0.

Three goals in under four minutes gave Laurier an early lead. Junior Tyler Botelho opened the scoring after a nice pass from fellow Junior Jerrett Putt. Botelho would follow by setting up Sophomore Denziel Henry who walked in and scored on a nice finish. The third goal was the result of a sensational solo effort by Sophomore Isaiah Ojo as he walked around a few defenders before scoring.

In the second half Henry scored his second after stepping around his defender and cutting in from the sideline to make it 4-0 with over 11 minutes remaining. The final goal was the result of Ojo playing the role of playmaker this time as he set up Putt for a goal with five minutes left.

The game was the second shutout of the tournament for Centritto, but he refused to accept all the credit, “Shutout’s a team effort to me, I had a couple of saves to make but nothing crazy, it was all the guys at the back playing the system”.

Laurier began the tournament in a three-team pool along with St. Lawrence (Kingston) and Fanshawe. Laurier entered with a clear plan, “The word of the game is focus, let’s frustrate the hell out of them.” Said Wiredu in the locker room before the game.

In their first game against St. Lawrence Laurier got a nice save from Centritto early before getting their chances. The early chances were highlighted by a shot by Botelho that hit the crossbar. Moments later another Botelho shot was saved but Henry took advantage to score a goal in his first game of the year.

On making his debut Henry said, “It feels like I came to the team and was effective and helped out,” as he scored three goals in four games.

Although they had the early lead, Laurier was almost caught sleeping in the final seconds as a sideline play resulted in St. Lawrence hitting the post with two seconds left. The second half saw Laurier hold their defensive form, including killing off a Botelho penalty with eight minutes left.

Botelho discussed the team’s efforts late in the game, “we were scrapping for the win, we were doing anything we could to get the win. […] With our defence, Martin especially, holding us down and winning the tackles we got to give credit to him. Without him and Jerrett at the back, and Pasquale in net, I don’t know what we would have done”.

A 1-0 loss to Fanshawe left Laurier in second place in their group leading to their playoff path. Although the team performed better than their previous tournament, Assistant Coach Jessi Asiedu knows where he wants the team to improve, “Getting better offensively, little more intensity, I feel that would help. Become a little more physical and we deliver the hard tackles before we get hit, that may help us save our legs too”.

Notes: In his first tournament, Henry scored three goals to take the team lead in goals… Botelho and Putt are also tied for the team lead in points with three each, both have one goal and two assist… Centritto now has four shutouts’ in eight games… Levi Furber missed most of the tournament due to a hamstring injury as a preventative measure… Laurier has scored nine goals and allowed nine goals in eight games this year… the 5-0 win was the most goals scored in a game and largest margin of victory in school history…. The 5-0 loss was the most goals allowed in a game and largest margin of defeat in school history… Wiredu is still attempting to expand the roster, “We’re having fun and the guys are loving it, we are calling out to anybody that wants to come join the movement, we have started a good brotherhood here.” he can be contacted at mwiredu@wlu.ca … The team will be playing their next tournament Feb. 18 at Redeemer College, also their last tournament of the regular season…