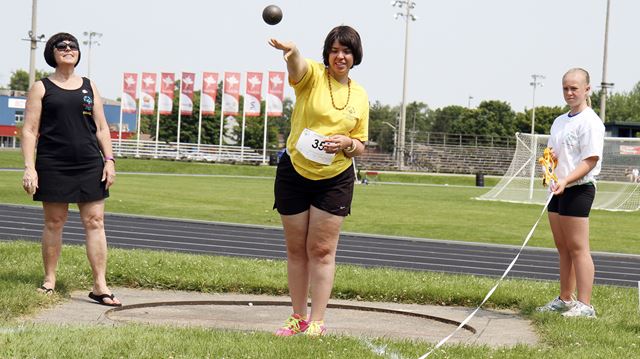 Peel Region hosted the Provincial games to see the ‘best of the best’ make it to team Ontario.
In the 3000 meter run, Brantford’s own Meghan Josling and Jeremy Tomilson-Willis finished first and second in their divisions. Reisha Baxter, another Brantford Olympian, finished among the top athletes in the
A few Brantford winners include Meghan Josling finishing in first place in her divison with a time of 15 minutes and Jeremy Tomilson-WIllis in second place in his division with a time of 11 minutes in the

Special Olympians from Brantford practiced multiple times a week at Kiwanis Field behind Pauline Johnson Collegiate in preparation.
“It’s a lot of fun,” said Jim Kruis, community coordinator for the Special Olympics when talking about the hard work that went into preparing for the provincial qualifier.

According to Kruis, 180 athletes, 30 coaches and 65 volunteers came out to their final practise.

All the athletes practice everything, so they are ready for whatever is thrown at them. Wednesday evening’s practice involved a warmup around the track while high jump and metre dashes were being set up.

As the athletes filed out onto the field, they high-fived both each other and the coaches. Olympians even came from outside Brantford to participate in the training.

Kruis said sports like bocce ball, baseball, soccer, track and field and golf would all have Olympians going for the gold.

Four years ago, Special Olympians competed so they could participate in the Provincials this year.

“We have 11 athletes from track and field going to provincials,” Kruis said.
Some had been here before.

“For me, it’s a piece of cake,” said Reisha Baxter, who had made it to Internationals one year and brought home a gold medal.

“I think it was in 2007. I went to China and it was incredible. I would go back just to visit.”
Some were new to the experience.

This is my first time ever going to the provincials,” said Meghan Josling, who has also made her cross country team at Mohawk College.

“It’s the first time from Brantford that a special olympian has made a varsity team like that,” Kruis said.

The athletes were more than excited to go and compete, and kept their motto in mind: Let me win, but if I cannot win, let me brave in the attempt.