Athletes come together for Pink Strong 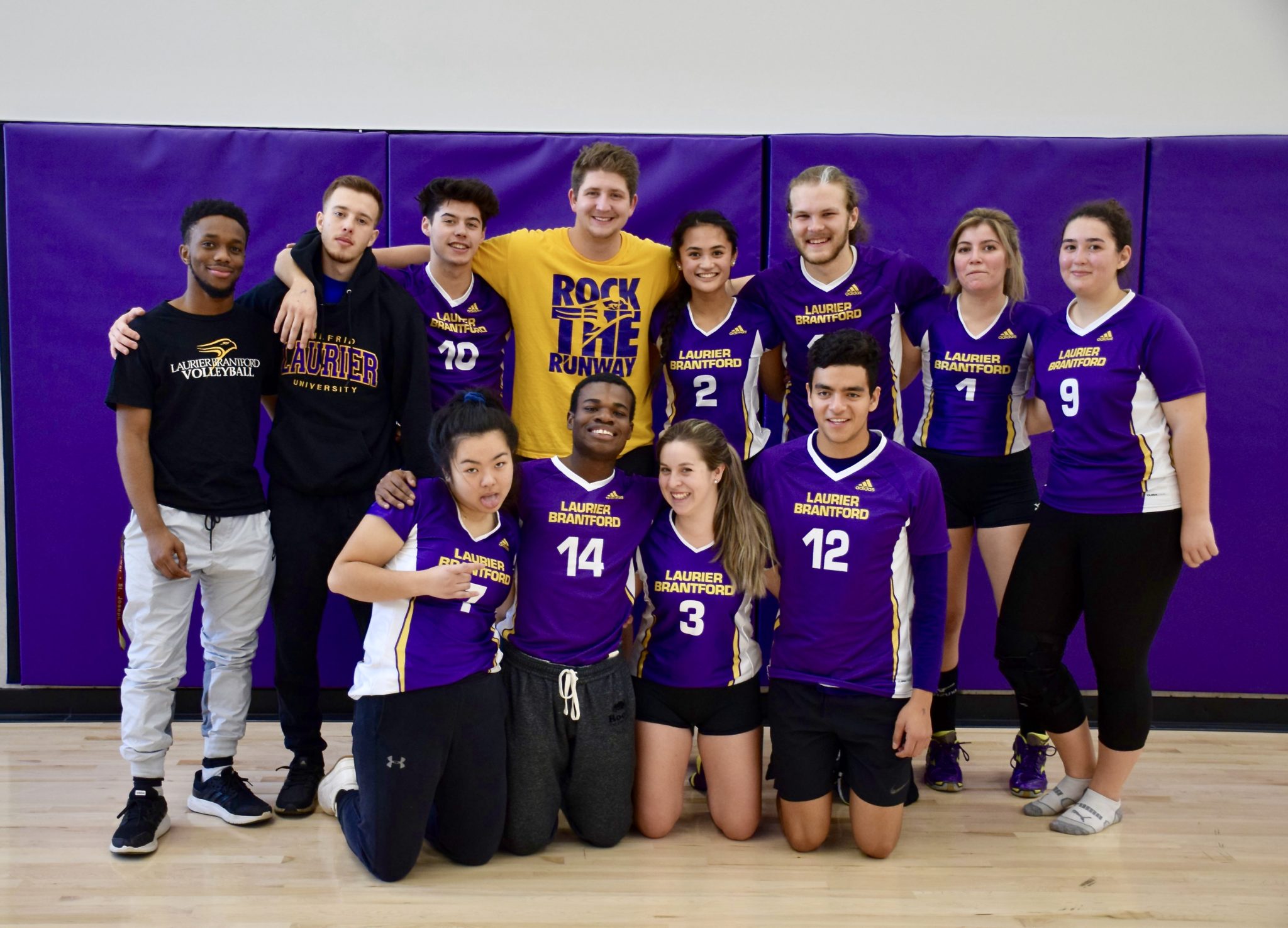 The event started with Balls for Breasts: a game of 3-on-3 basketball on Nov. 20. Pink Strong continued all week: Wednesday was the Movemeber Madness first annual charity basketball game; Thursday was a Pink Fitness Zumba event; and Friday was an extramural volleyball tournament.

Laurier Brantford’s extramural volleyball team has a lot to be proud of after Friday’s tournament, but they will have some work to do before their season ends in the new year.

The Golden Hawks went 3-0 in their three guaranteed games, falling short of moving on to the playoff round.

“We didn’t get the result we wanted today,” said team captain Joel Schellenberger, “But we played the best we’ve played all season.”

All games were close and could have gone either way. Laurier Brantford was able to recover quickly from misplays and there were many new players who added a spark on the court.

“Amanda Rivera drives a lot of our offense,” Schellenberger said of the new setter. “She is fantastic.”

Sarah Bray is another new player to watch. Of Bray, who joined the team as a first-year, Schellenberger said: “We put a lot of pressure on her to do well, to be the cornerstone of offense. She’s doing a fantastic job keeping that going.”

Laurier’s first game was a close one, and although Humber Lakeshore took the victory, the Golden Hawks were close to snagging the win.

Laurier took an early lead in the first set, but it became a close game after Lakeshore worked hard to make quite the comeback and worked their way to a score of 24-21.

Kieran McGrath kept the team in it with a hit from the back line, which brought the Golden Hawks up to 22 points. In the next play, Bray made a nice tip that brought Laurier up yet another point, keeping them in the game. It was then that Laurier mis-served and the win went to Lakeshore (25-23).

Laurier established their rhythm and was able to keep their lead in the second set. Halfway through the game, they had already doubled Lakeshore’s points: 16-8. They easily took the set with a final score of 25-13.

The tie meant Lakeshore and Laurier had to face off in a third set, but Lakeshore took an early lead and the overall game victory.

Laurier played their second game against Centennial, which was another close match. The Golden Hawks seized the first set 25-20, while the Colts won the second set 25-19. Centennial took the game in the third set after winning by two points.

The third game was the most inconsistent game of the day for the Golden Hawks.

The first set went well. Rivera made game-changing blocks and the energy from the team both on the court and on the bench was the highest it had been all day. Unfortunately for Laurier, UOIT made some hits from their back line that were too hard and accurate for the Golden Hawks to dig. UOIT won the first set 25-22.

Things went downhill from there for Laurier: they tried making some changes in the line-up, bringing in third-year Josh Boettcher and first-year blondie, but the Golden Hawks’ lack of communication during the set resulted in a hard loss of 25-7.

Schellenberger says for the next tournament, the Golden Hawks need to focus on consistency, staying focused and not getting too high or too low.

“When we were playing well today we were communicating, we moved our feet,” he said. “When we play confident volleyball we play better volleyball.”

He’s optimistic going into the second half of their season.

“This is the best day of volleyball I’ve played at Laurier,” he said. “The team is just gradually getting better every single tournament.”

He says at the end of the year, the Golden Hawks only lose a couple players. The majority of the team staying means they’ll be able to continue to learn to work with each other and build more consistency.

The Balls for Breasts 3-on-3 basketball tournament was an event held by the Laurier Brantford Athletics and Recreation team.

The tournament was a for-fun tournament that saw more than 10 teams square off against each other in 15-minute games. The tournament was mostly for recreational purposes and raising money for a great cause, so the games could end in ties. With that being said, there was a great sense of competition, and as a result there were many highlight plays on both sides of the ball.

The event was not exclusive to Laurier Brantford students however, and there were a few local children who showed their passion for the sport by participating in the event. There were some adult YMCA members that participated as well.

As participant Ian Linton put it, “It supports a good cause and it’s just a lot of fun to play in.”

The winners received a pizza coupon for their efforts.

The Movember Madness first annual charity basketball game was probably the event of the week as it featured a bit of everything.

The $2 entry fee was definitely worth it, as all proceeds went to the Canadian Cancer Society and those who attended were treated to a tremendous basketball game.

The Laurier Brantford extramural men’s basketball team played against the Brantford police, and both teams played a hard-fought game.

The game had four 12-minute quarters as well as an entertaining half-time show to give each team an extended breather. Make no mistake, however: this game was not just for fun. The game had a great sense of competition and there were referees on hand to ensure the fairness of the calls.

The game had a bit of a slow start as both teams took a while to get warmed up, and it took some time for the shots to start falling. The crowd slowly got into the game as well, not truly coming to life until about midway through the second quarter — thanks in large part to the Laurier Brantford cheerleading team who handed out hand clappers to help make some noise.

Similarly to the basketball tournament held the day before, there were plenty of non-Laurier Brantford community members in attendance — some with plenty of children on hand — enjoying a great night.

It was 39-19 for Laurier Brantford by the midway point, and as both teams took a short break to collect themselves, the half-time festivities began.

The halftime show started with a bean bag toss, with the goal of landing the bean bag as close to the eye in the Laurier Golden Hawk logo as possible. Each toss cost a dollar and the proceeds went to charity. The winner won a cool black Laurier backpack. Then Chaos dance team, decked out in pink, performed a dance to “Uptown Funk”. The players then returned to the court and the second half of the game was ready to begin again.

The police had a tough task of closing the 20-point gap in the second half, but they did their best to chip away at Laurier’s lead. Led by officer Mark St. Amand and his tremendous dribbling and shooting skills, the police quickly began to draw closer to the Golden Hawks.

St. Amand effectively hit some threes and dished passes off to other teammates to lead his team back into the game.

It wasn’t as easy as it sounds, however, as a two-headed attack featuring guard Andre Dinglasan and centre Nathan Jackman did their best to ensure Laurier kept the lead after three quarters of play.

The score was 60-47 after the third quarter and the shots were starting to fall from both teams, making the game really entertaining. St. Amand continued to cause problems for the Laurier defence and he helped the Brantford Police cut the point difference to just one with 3:56 left to go in the fourth quarter. This is where things really picked up, as both teams made some big shots during the final few minutes.

Dinglasan and Jackman continued to produce for the Golden Hawks, while officer Abby Heron and officer Matt Roberts provided their star St. Amand with some huge help. The teams ended the fourth quarter tied 77-77.

Unlike the basketball tournament, there were no ties allowed, meaning they had to go into overtime. It was a low-scoring extra frame that was three minutes long, and it was 79-79 with 29 seconds left. Then Laurier hit a bucket with seven seconds left that looked like it was going to win them the game.

Cue officer Mark St. Amand: After receiving the inbound pass, St. Amand bolted up the court and got a shot off as time expired . . . swish. St. Amand’s teammates swarmed him as he had just sunk the game-winning shot and stunned the Golden Hawks.

It’s safe to say that the first annual event was a huge success and that the event will be coming back for a second year. Hopefully, so will St. Amand, who put on a performance like no other. The event was truly a great spectacle and most importantly, the proceeds went to charity and supported a great cause.