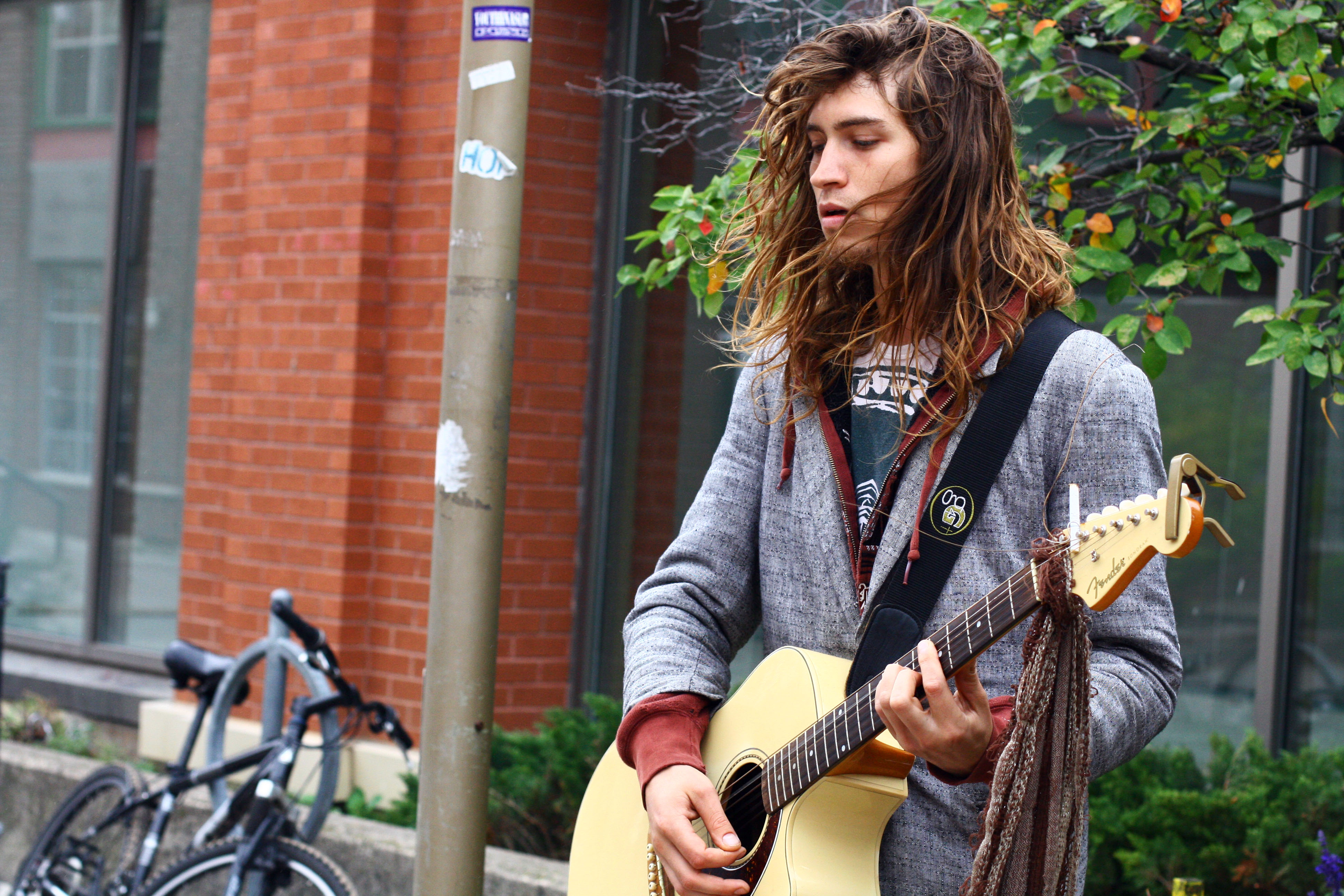 I decided I wanted to tell the story of a local busker musician and figured who better to talk to than the long-haired guitar player usually singing in the alleyway between Therapy Lounge and Williams. Right from the get-go, I knew this was going to be one of my most unique interviews to date.

I approached him and pitched the interview, taking note of the scarf tied to his guitar and the case sprinkled with change laid out before him. After he swiped his hair out of his face and agreed to the interview, I began with a pretty straight forward question.

What is your name?

Okaaaaay, do you wish people called you Snake?

I decided to move on: So why would you say you are here today, playing music?

“Well, I guess that depends,” he said. “Do you like snakes?”

We laughed and he added, “I’m here because I really like to boost up the alley with some vibes.”

Fact: Dickens chooses that specific spot to play based solely on the “No Loitering” sign right behind him.

For him, his music is more about making people smile than making money.

During the 45 minutes I was sitting with Dickens, many guys came to say hi to their buddy, his old probation officer walked by, and one man tossed a cigarette into his case. But my personal favourite was the total stranger who gave Dickens a $10 bill and said, “If you don’t eat, you don’t shit. And if you don’t shit, you’re gonna die.” To which Dickens replied with a laugh, “No shit.”

I have heard Dickens’ style of music countless times while walking past, but I wanted to know how he would describe it.

“The rumour is that it’s just gypsy western classical swing jazz with some rock ’n’ roll but that’s a little shallow, I think,” he said. “We are also samba.”

Dickens has been part of a band called Mammoth Seed for about a year but he also plays solo gigs.

I asked him about the long, dark fabric tied to the neck of his guitar, expecting to hear a heart throbbing story of what it represents to him.

“The scarf? It looks really fucking cool. When I’m smoking and that thing’s blowing in the wind, it’s just like ‘yes.’”

Now for the best part of the conversation: As Dickens mindlessly strummed some chords, I asked him of all the songs he has written, which is his favourite.

“It could be everything. Everything that’s still going on, so like as one song, as a uni-chorus feel. Or is it a verse? Oh yeah, it’s a verse. Universe.”

I asked him if he had any of this unending, evolving song written down on paper for me to see. He reaches into his guitar case and hands me a Stephen King novel. I open it up, expecting to see words scrawled in the margins. But as I am looking at the beginning of chapter one, Dickens begins singing the first few lines of the page word-for-word off by heart.

“See, somebody writes it down,” he said.

“I don’t go into competitions, but I do it a lot,” he said. He returns the favour by providing beer.

Dickens is thankful he had the opportunity to take one semester at Mohawk College in media and entertainment studies as it opened him up to new concepts and people.

“It seemed like a lot of people who were my friends at the time were being pressured by police and school itself to stop going to school,” he said. “If you think about it, that’s kind of fucked up. School should be available for everyone.”

When asked about happiness, his reply was his tagline that he weaved throughout the entire conversation: “It is what it is.”

“Happiness is relative,” he said. “J’aimoi, I have me, and I’m happy I can come down here and jam.”

In the end, it did not feel right to simply toss him a few coins. Sometime this year I’ll take him to lunch and hang out for the afternoon instead.

Next time you walk past a Brantford busker, or any local for that matter, talk to them. You may just end up meeting someone as cool as Alex Dickens.