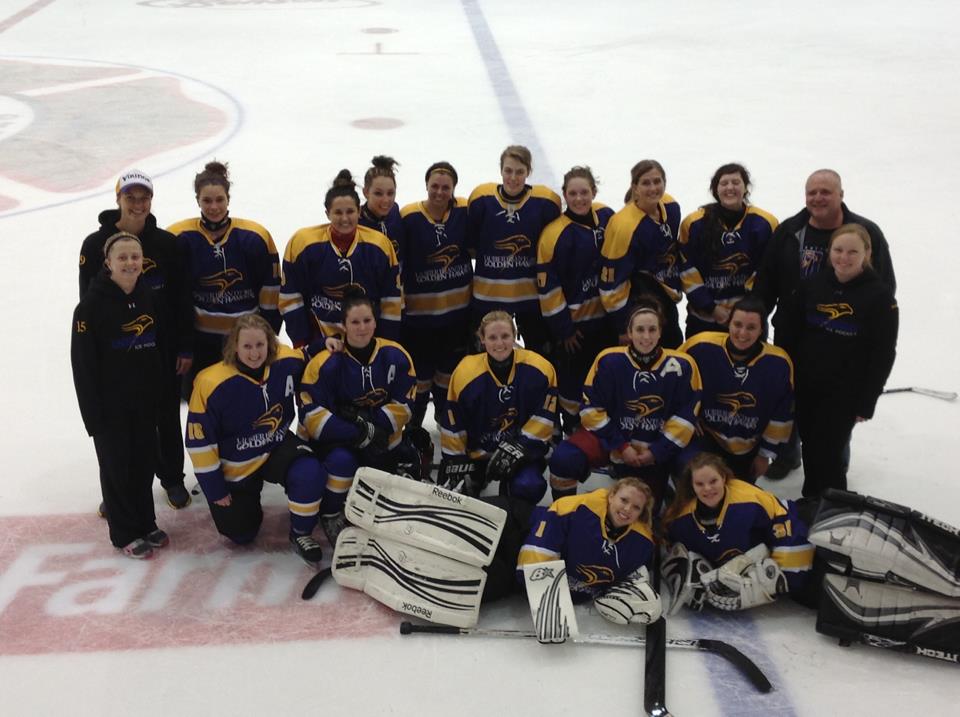 The Laurier women’s hockey team wore their hearts on their sleeves in their end of the year tournament where after an intense round robin and subsequent games they lost a tough 1-0 match for bronze against Humber. Despite the tough finish, Captain Brittany Howe was proud of how the team performed.

“With the limited amount of ice time we had, I feel like we did really well. With the school expanding and getting more funding to put towards our extramurals, I feel like the women’s hockey team has the opportunity to be very successful in the future,” said Howe.

The women started off their tournament slowly with a 2-0 loss against Georgian College. Their second game against Fanshawe wasn’t much better, which resulted in a 3-0 loss. The Golden Hawks made it to the quarter finals and again faced off against the women from Georgian College, but this time came away with a 2-1 win to push them to the semifinals. They then faced off against St. Lawrence Cornwall and came up on the short end of the 4-1 game. Their last game was the aforementioned tough 1-0 loss to Humber.

The fourth place finish for the team was a very solid effort. Although a first place tournament win was the ideal situation the girls were extremely proud that their team qualified for their first Challenge Cup in only their second year of extramural play.

“Although the team and staff were really hoping for a first place finish, it’s still a success in my eyes,” said Howe.

The girls prepared hard for the tournament by getting some ice time and working on different plays and situations that could be useful in a game. Howe also made sure the team had dry land and extra conditioning training to ensure that there would be no issue late in the tournament.

“Playing four or five games in a day is very physically demanding and in past tournaments it has come down to who is in the best conditioning in the final game and we wanted to ensure that conditioning was not an issue for us in this tournament,” said Howe.

All of the girls on the squad put forth their best efforts throughout the tournament. Howe was especially impressed with a few of the players.

“I think our goalies Kourtney Hulme and Madison Scott did really well for us all tournament. Kimber Williams, Michelle Anger and Katrina Moczerad all had an excellent tournament and helped us out a lot,” said Howe.

This was the final tournament of the year for the team and tryouts will be starting up fresh again next year. Howe says that the community support both from staff and students is important for the team. The captain mentioned especially that the athletics staff has been incredibly helpful this year.

“The girl’s extramural hockey team would also like to thank our athletics staff, Greg Stewart, Lynne Gulliver and Kristin Hogg for helping us have such a successful and fun year!” says Howe.

The women’s team broke ground and had a successful and positive year. They definitely put the LB campus and it’s students on the map and made them proud.