Why we donate: Breast cancer vs prostate cancer 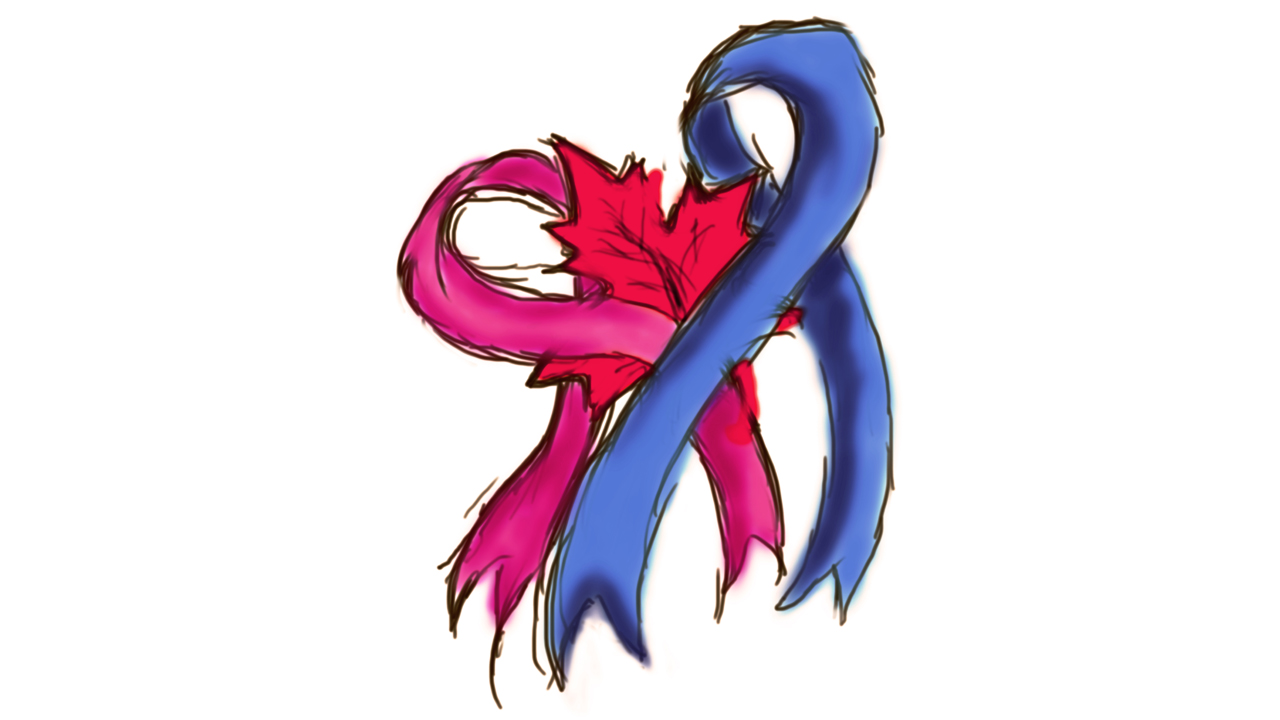 The sea of pink, this is what it seems the ever-growing support for breast cancer has become and when we think of prostate cancer we think of the sea of? Well although pink seems to be the only colour that gets associated with cancer the fact is that every type of cancer is represented by a different colour, prostate cancer’s being blue. Did we know this? How often have we been told to “think pink? Why not “think blue?”

Both breast cancer and prostate cancer, despite their variation in media attention, have historically had similar incidence rates and death rates.  However, a stigma has been created that suggests that breast cancer is the most dangerous and subsequently should get the most attention and money, but this is far from the truth; let’s take a look.

Breast Cancer: According to the Canadian Cancer Society in 2012 about 22,700 women were diagnosed with breast cancer, of those 5,100 died from the disease. The death rate for women was 19 per 100,000 people.

Prostate Cancer: According to the Canadian Cancer Society in 2012 about 26,500 Canadian men were diagnosed with prostate cancer, of those 4,000 men died from the disease. The death rate for men was 19 per 100,000 people.

Looking at the statistics the two types of cancers, they both seem to mirror each other in almost every category.

Lorna Wilson, a 64 year old former Bell Canada employee who is a breast cancer survivor has had quite the battle with breast cancer.

In 1996, after working at Bell for over seven years, she got a call at work that no one ever wants to hear; that a lump she had felt in her breast was malignant.

Wilson realized that the likely cause of their cancer was likely due to the electromagnetic fields from the computers as well as though electric cables, phones, and fax machines that surrounded the women.

After realizing that it was likely her work environment that caused her cancer, Wilson left Bell on long-term leave and got involved with the Breast Cancer Coalition. The Breast Cancer Coalition was a group that Wilson joined that helped to raise money for breast cancer while also spreading awareness about the concerns of workplace hazards that can cause cancer.

When Wilson started her work with the Breast Cancer Coalition she started to really understand how Cancer Care Ontario works. Wilson was upset to hear that most of the money the company takes in does not actually go towards cancer research.

“I refuse to donate any money to Cancer Care Ontario.  I became an activist when I learned how much money was spent on “No Smoking” ads and how little was spent on “Prevention,” says Wilson.

Wilson was never on board with the pink ribbon campaign, which has become the international symbol of breast cancer. In fact Wilson points out, “we used to say pink stinks.”

Joe Schonewille is a prostate cancer survivor who, unlike many men who contract the disease, was able to catch it early enough in a stage where it was small enough that it could be treated with a surgery and minimal radiation.

Schonewille believes that when it comes to men and women, women are usually more inclined to discuss their condition where as men tend to try to keep it in and keep their true feelings bottled up.  Schonewille however, says that he had no problem talking about his condition in fact he started to talk to people about it as soon as he learned about his diagnosis.

“As soon as I learned I had it I told my family and I had no hesitation speaking to anyone about it,” says Schonewille., “people actually started making fun of me because I would go up to people and say ‘hey how old are you?’ and they would say ‘50’ and I would ask ‘have you gotten your PSA (Prostate-Specific Antigen Test)? And they would say ‘no’ and I would tell them ‘you should sooner rather than later’.”

“Yes,yes,yes,yes,yes, I was more inclined to. Prior to that by human nature I just didn’t, but after yes,” says Schonewille.

He adds, “I sponsor a motorcycle event in Barrie that raises money for prostate cancer every year and Joel (Schonewille’s son) fundraised for me.”

Prostate cancer, like breast cancer, is just as devastating to those who contract it as Schonewille describes it.

“I was very heart-broken and thought it was the end of the world. I thought they might as well start making a pine box for me because I was very much heart-broken, thinking why me,” says Schonewille.

One thing that Joe Schonewille clearly remembers after his diagnosis was an individual at his work. Joe asked him if he had ever been tested for prostate cancer. To which he replied, “no and I don’t plan on going, years ago my father says to me I came into the world like a man and I’m going out like a man.”

That always stuck with him because within a year after this, his co-worker died from cancer.

Sandra Wilkins is another breast cancer survivor and she agrees with Joe and believes that men’s reluctance to speak is why prostate cancer doesn’t seem to be as prevalent in the media.

As Sandra suggests, “it may be because of the “sex” of the diseases.  Women tend to be more open and talk about personal issues.  Where men tend to keep issues to themselves…maybe that has something to do with the perceived difference in the “sexiness”

Fraser Green has spent a great deal of his life teaching charity organizations what it really takes to be a successful philanthropic institution.

Fraser believes that a very well thought-out mission statement can mean the world to donors. He also believes that there are little things that organizations can do to keep donors coming back.

“Good mission statements are ones that do a very good job of expressing and articulating the need for their dollars, do something like show a picture,” says Green, “Stewardship, keep communicating with your donors. Show them where the money went, show the outcomes. This helps to build trust with your donors and if you can do that they will become life-long donors.”

Unfortunately when it comes to most organizations that look to raise money for cancer research (regardless of types), Green believes that their mission statement’s fail.

Fraser believes this because he feels that cancer mission statements give this sense of false hope to donors; making them believe that with enough money they can make cancer history, which is just not true.

“A world without cancer is not a credible thing,” says Green. He adds, “There will always be cancer, it isn’t something that will just go away. Instead the focus should be that no one fears cancer.”

Green argues that most of the money should be going to cancer research to find a cure and he believes that a more likely scenario isn’t that cancer is eradicated, but rather that one day we might be able to take a pill when we are diagnosed with cancer instead of the gruelling treatment of chemotherapy.

When it comes to breast cancer and prostate cancer both have had almost the same effects on both women and men yet it seems that breast cancer has been placed on a pedestal that no other cancer can live up to. It seems that one of the biggest reasons for this is the difference between men and women and their ability to talk about their conditions. Maybe if we can talk continue to talk about prostate cancer and not make the prostate out to be a dirty word then the donations will start to come in.

Both breast cancer and prostate cancer can strip both men and women down and change their lives. Cancer is a scary word whether it is preceded by the words breast, prostate or anything else for that matter. The argument is not that we should ignore one and not the other, but that they should be seen as equals and that donations should reflect that.