There’s a day for everything 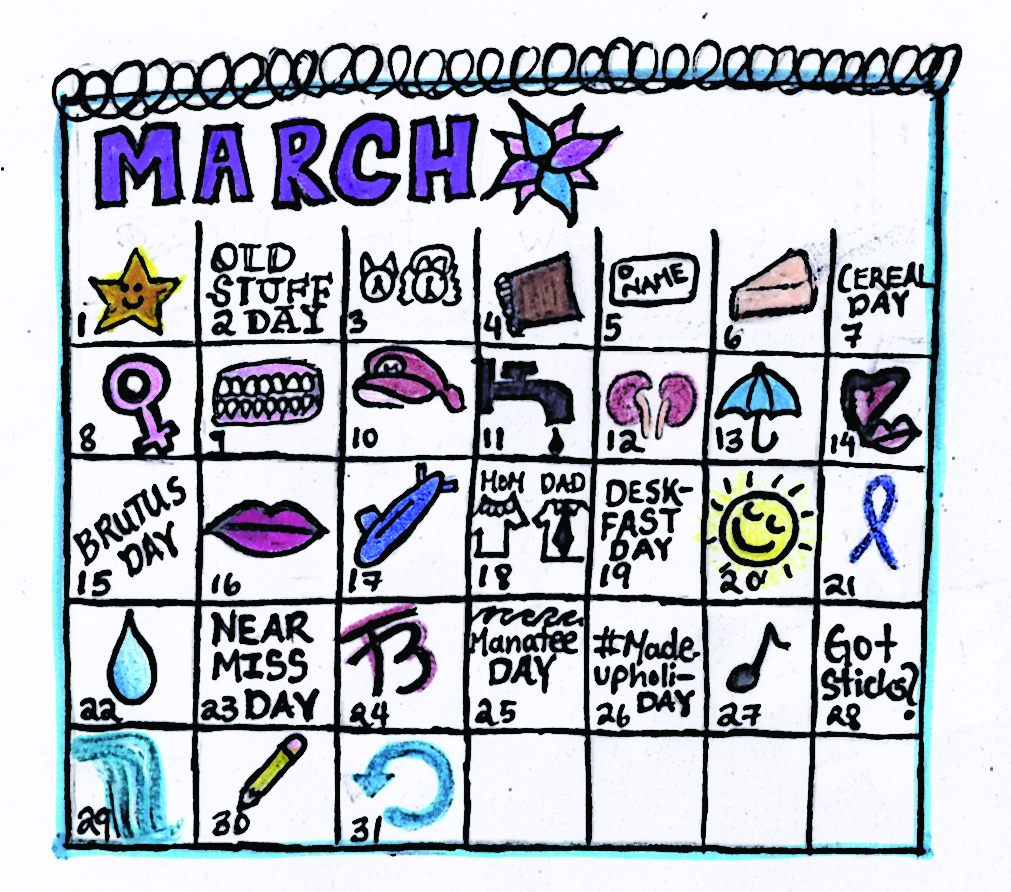 It’s March. For some, this month is about melting snow and St. Patty’s day. But March is also the month where you can celebrate proof reading, the scrapbooking industry or even false teeth. Some days, like the International Day of Happiness created by the UN, are quite legitimate and purposeful. “What If Cats and Dogs Had Opposite Thumbs Day” may not be as important to humanity.

March also celebrates another form of Valentine’s Day: Steak and BJ Day. Yes, this is a real day that is celebrated every March 14th, exactly one month after February 14th.

Another website, called DaysOfTheYear.com includes lists of holidays for every month. Some days include multiple, potentially ridiculous, holidays celebrated on the same day.

The site gathers information on each celebrated day. Some holidays are local while others are international. To be placed on the website, each holiday must have a relatively strong following.

Fourth-year Laurier student Emily De Vega said she did not know that many of the ‘crazy’ days included on the website existed, but does know of the Steak and BJ Day.

“I do think while some of them are relevant and some of them should be embraced or celebrated, there are some that are over the top and may be a bit too crazy,” she said.

“I don’t think there should be one day to just eat Nutella or celebrate the creation of Nutella,” De Vega said.  “I find if I eat Nutella on a daily basis it’s not going to change if I eat it on a regular day or on the actual day.”

Laurier student Talia Lanzarotta finds the idea of Nutella Day exciting but did not celebrate it.

“I just found out about it this year because I was at the Wayne Gretzky Centre and they had a whole setup for Nutella Day,” Lanzarotta said. “But to be honest that doesn’t seem that important. I thought it was really cool but I didn’t understand the purpose.”

Laurier student Kaitlin Brunetti believes the crazier celebratory days take attention away from days that try to raise awareness for serious causes such as Down syndrome and tuberculosis.

She said she does not participate in the sillier days but gets involved in more serious issues. “I participated in Women’s Day that just passed,” Brunetti said.

Lanzarotta said she feels some of the celebratory days that do not aim to raise awareness do not serve a purpose. “I feel like for those events we are trying to promote something and advertise something,” she said. “If you want to fundraise, you want it to be for a good cause.”

March 24th is both Tuberculosis Day and Chocolate Covered Raisins Day. Tuberculosis Day first began in 1982 and aims to raise awareness of the disease. Chocolate Covered Raisins Day celebrates the taste of the snack. After scanning social media, it seems like just as many people talk about chocolate-covered raisins on March 24th as they do the deadly disease.

“Many of the not so important days or events or objects that get celebrated do take away from those that are more serious [which] should be embraced,” De Vega said. “It seems like every little thing is just getting turned into a day.”

“When it comes to the days that are serious [which] should be promoted, I find that even if they’re taken more seriously, they’re not as special because we have all these other little days that are being celebrated as well,” De Vega said.

Gaskell said she does not celebrate some of the more eccentric days but always hears about them afterwards. “Someone always asks, ‘Oh, did year hear about national this or that day?’ and I say, ‘Who cares?’” she said. “I think they could make better use of these national days by raising awareness for important causes.”