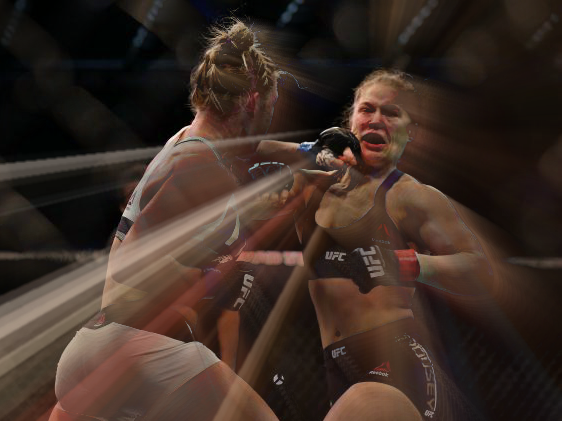 Five to one odds, a 48 second fight that saw about 24 clean punches to the face, a relatively divided crowd (excited nonetheless), and a fallen champion with a bruised ego…

Doesn’t it always seem like the most happens in the short fights? Ronda Rousey vs Amanda Nunes was the final upset of the year that we all needed.

The fresh-faced blonde with a burgeoning career in movies and media was us, and Nunes was 2016, digging its claws into our sides for one final sweet minute of triumph over will. Just like Rousey, we all kind of had to learn some things the hard way last year.

Sometimes we just fool ourselves into thinking the wrong people might win (although nothing comes to mind specifically…). We choose our default winner and then act super shocked when we simply failed to size up the competition, or even acknowledge them in any realistic way.

Nunes was the Republican Party, and her fist was Donald Trump. I guess that makes Rousey the democrats, but she might as well have represented the unsuspecting majority.

Don’t get me wrong, as the defending champion Nunes is clearly a force to be reckoned with. Had I done my research beforehand I would have put my eggs in her basket for sure, but I don’t think anyone was expecting the bludgeoning that ensued mere moments into the fight.

Whether you had your money on Nunes or Rousey you probably couldn’t have predicted the pummeling that took place for the entire 48 seconds of the fight, but I’m not the expert. I just look at the situation as one where the true champion asserted her dominance. As Nunes said at the end of the fight, we need to forget about Ronda Rousey now, at least in the context of a future UFC career.

She may have opened the doors for female fighting, and probably made Dana White rich for the hundredth time over, but this fight and her career are significant for several different reasons that reach below the service, tapping into some sexist and misogynistic norms that I’m probably not even qualified to talk about.

As someone with a marketing background I do think it was well executed; get the pretty girls in the ring, promote them in posters with their hair and makeup well done, and then a few months later, once everybody is looking, you put her up against a truly terrifying opponent and add it to the title card.

Don’t get me wrong though, Rousey had already accomplished far more than I ever will even before she stepped inside the octagon, it just boggles my mind that she managed to avoid fighting someone up to Nunes’ caliber for so long. I also just can’t fathom how the odds were so stacked in her favour.

There are a number of questions still looming in light of the outcome of the fight but the most popular one would definitely have to be what’s next for Rousey as most people speculate a lucrative career in entertainment.

Me, on the other hand, I’m just hoping Nunes gets the attention and appreciation that her skills have afforded her. A fighter with her skill level deserves to be on the title card, even if she isn’t as marketable for movies, film and UFC advertising.

We get it Dana White, you kicked the doors wide open for female fighters, finally giving them the opportunities and the attention that they deserve. But now that you’ve made your cake, let’s put the spotlight on some of these young women stepping into the ring, even if they aren’t blond haired, bikini clad white girls with ‘good marketing tactic’ written all over them.

The real fans will watch no matter what.