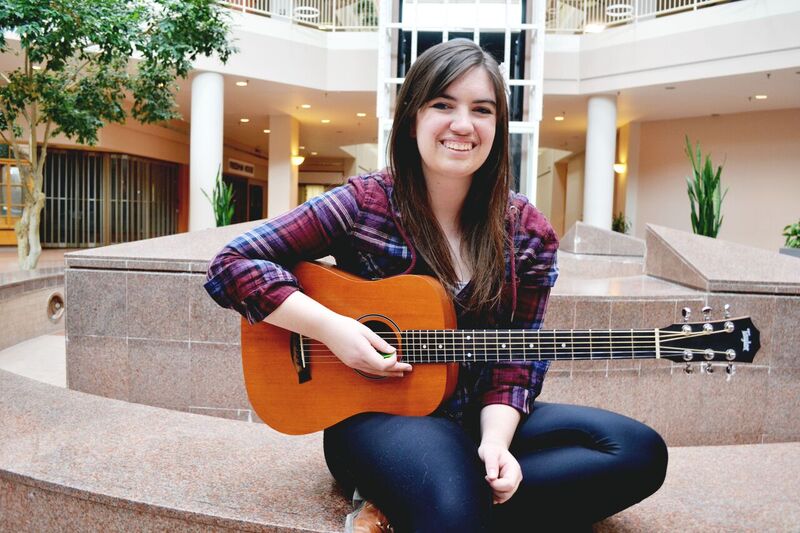 How long have you been writing and singing music for?

I’ve been singing for pretty much my entire life, but I started writing songs when I was in grade seven (13 years old).

What influenced you to start singing and writing music?

Personally, I’ve always loved singing along to music on the radio, but I was always very shy about my voice. It took a lot to sing in front of people because I was always so nervous. That’s one thing I really had to work hard to overcome.

As for songwriting, I never really kept a diary. The songs I write are essentially my version of diary entries. It’s always easier to write what you know, so that’s how I got started. Feeling happy about something? I wrote a song. Having a bad day? I wrote a song. Soon enough, I overcame my nerves and I sang in front of people for the first time and I haven’t looked back since.

Do you write all of your own songs? If so, what do you feel is the value of writing your own music over having someone write the song for you?

Generally, yes, I do write all of my own songs. There have been occasions where I have collaborated with other songwriters and recently, I’ve really enjoyed creating mashups of popular songs. Honestly, I love singing my own music because I can put all of my emotions into it. That’s how I usually take time to relax, and clear my mind. When someone writes a song for you, you don’t have that natural connection right away; you have to work to build it. It’s the same for me when I think about another artist singing one of my songs. Everyone has their own interpretation of each song they hear, so they may not feel the same thing I feel when they sing it.

A lot of music coming out recently has been about sex, drugs, partying and heartbreak. What attracts you writing and singing about love instead?

Personally, I can relate to love better than any of those other topics. Plus, the one thing I love about songwriting is that people can relate to what I write. By now, a lot of my close friends actually know the lyrics to my songs, and it always amazes me when one of my songs relates perfectly to what they are going through. Everyone can relate to love in one way or another, so it’s a fairly relevant topic to write about.

While looking for your work I noticed that you had a bio on CBC music. How did you become involved in that?

So last year, I entered CBC’s Rock Your Campus contest, which is available to any university or college students across Canada. I entered one of my favourite original songs that I have written so far, called Effortlessly. From there, people voted for which songs they like. I was over the moon when I made it to Top 100 and I appreciated all of the support from my family and friends. That was also the first time most of my friends heard a song I wrote and sang, so it took a lot of courage, and a lot of times recording my vocal track, to be 100 per cent happy with the final version of the song I was putting on CBC’s website.

Which of the two do you find more influential while writing music and why: love or heartbreak?

Truthfully, both are super influential. However, that being said, I find it much easier to write about heartbreak. My friends joke that I’m kind of a mini Taylor Swift in that way. Whenever someone breaks my heart, the lyrics just flow out seamlessly. In fact, for a while, I found it harder to write upbeat happy love songs compared to sad, more intense heartbreak songs. I’ve been working to change that, but the pain and hurt from breakups always makes for great songs.

So you’ve performed in a number of concerts in the past. What is one of your favourite concert memories? One of the worst?

One of my favourite concerts was performing at an event ran by Waterloo’s Youth Council. It was held in Waterloo Public Square in the middle of Uptown Waterloo. I loved the venue and the crowd there was wonderful. I also did a coffee house in Waterloo where I sang an original song for the first time. That performance will always be special to me because I got so much positive feedback from that original. It really pushed me to continue singing songs I’ve written.

My worst wasn’t necessarily a concert, but I auditioned for a talent show a few years ago. It was one of my first times singing under a bit of pressure since there were judges watching. I got my family to record the performance and my voice was just not very good because I was nervous the entire time. It was a great learning experience though, and since then, I am able to sing the song I sang that day with much more confidence.

As this is the sex issue, I should ask a few questions about sex. How do you feel about the sexualization of female singers in the music industry?

Personally, I think that it’s getting a bit out of hand. As a rising artist in the industry, I’m starting to feel pressure to be more sexual with lyrics and my appearance to get noticed in the industry. Actually, there’s a great country song right now by Maddie and Tae called “Girl in a Country Song”. The lyrics in that song describes what being a girl in the music industry means perfectly. I don’t want to give into the pressures though. That’s not who I am. I much rather have people like the person I am instead of someone I’m not.

Who do you think the sexiest person in the music industry is? The least sexy?

When writing a love song, has sex ever an influence?

Honestly, not really. I tend towards writing about the cute, “honeymoon” phase of love or the sad and angry feelings of heartbreak.

How has going to Laurier Brantford influenced your singing?

Coming out of high school, I was much more confident with my singing since I performed in each musical production and a bunch of other opportunities performing in front of audiences. So when I got to Brantford, I wanted to continue to try to sing as often as I could. During my O-Week in 2014, I was actually the first person who performed at Talent Night. I also did each BRC Coffee House, and currently, I am an executive on Laurier Brantford Singers. I also had the opportunity to compete in a competition between students from Laurier, the University of Waterloo, and Conestoga College, called The Shot. In season three of the competition, I made it to callbacks, which had about 30 or so performers in it. It was an amazing experience and I hope to participate in it again in the future.

I saw your music video for Round 2. Can we expect any other music videos or upcoming albums?

I’m hoping to record a demo album one day. That’s the dream. Over the next few weekends, I’m working with a music producer during some songwriting workshops and I’ll have the chance to sing one of the songs I’ve written in front of a panel of music industry professionals, so you never know what could come with that! I’d also love to make more music videos in the future. I recently got a new DSLR camera, so maybe I’ll put some time aside over the summer and work on another music video.

Is there anywhere that people can listen to your work?

Yes. I post all of my covers to my SoundCloud account, and I also have a twitter account dedicated to my music, which is @officialSCmusic. I’ve always wanted to start a YouTube channel too, but I still haven’t found the courage make that leap. Maybe one day I’ll do it though!