That’s not what I signed up for… 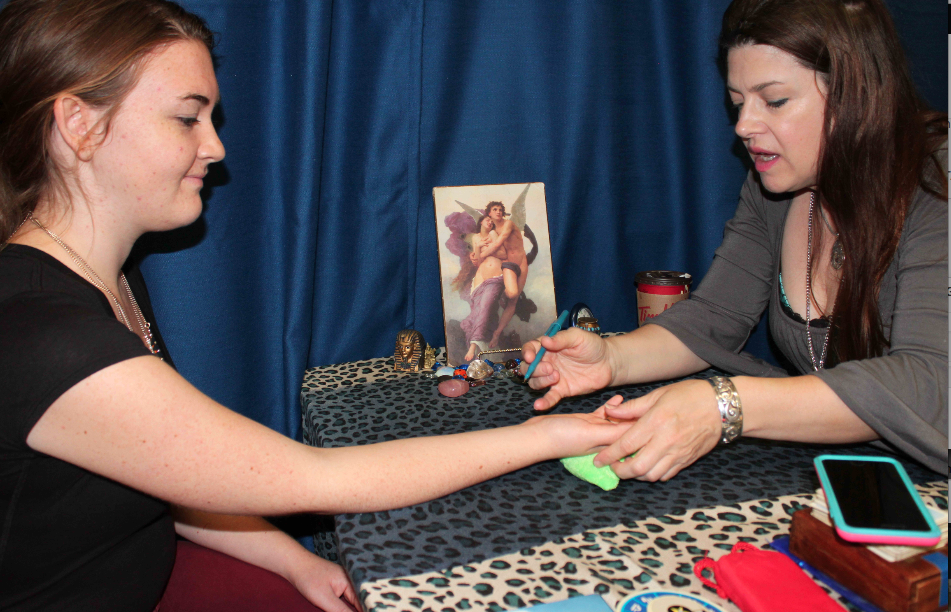 Being of the Type-A personality, I take a sick amount of pleasure in ensuring that my life is mapped out. I know where I want to be in the next hour, month and year. I have colour-coded calendars and my life operates on a series of carefully developed timers and checklists. My worst nightmare lays somewhere in between running late for a meeting and missing an assignment deadline.

I plan to graduate this year, spend summer 2016 travelling Canada, and then in the next two years I hope to be heading to law school. I would like to eventually marry my current partner and would like to live a relatively long life.

To test the authenticity of my meticulous planning, I decided to check out the Psychic Expo being hosted at the Brantford Civic Centre last weekend. Bringing nothing but my cellphone, a photographer (who full disclosure, also happens to be my boyfriend), and an open mind, I was ready to see my future, or at least compare it to the one I’ve planned.

The closest experience to the super natural or psychic dimensions I had ever had was in the girls change room of my middle-school. With a homemade pizza box Ouija board we’d hide from our teachers in an effort to escape the awfulness that was outdoor recess on wintry days by talking to ghosts. Sadly, the pizza box never really worked.

The Psychic Expo, as it turns out, is exactly like what you’d imagine a Psychic Expo to be. A room full of crystals, glamour shots of famous psychics, aura cameras, incense and wide eyed people, ready to contact the deceased, find out their future or how to cure their ailments.

Walking into the room, I was greeted by a man named Paul. Grinning, he said, “You must be the journalist from Laurier.”

It was kind of spooky that he knew who I was especially since I wasn’t wearing my press pass. Noting my surprise, Paul nodded his head and said “I know.”

Still a little startled, Paul allowed me to pick a crystal before beginning my journey, I opted for the amethyst that was supposed to help me creatively.

The room was set up for a convention, heavy blue drapes cased everything in. For someone who practices the art of self reliance as religiously as I do, the whole set up felt hokey. And expensive. The average readings ran about $75.  Why would anyone spend money to have somebody else prattle off vague information about your future? There isn’t even any kind of verification process or licensing these people have obtained. Do people really orient their lives around these readings?

I wandered over to the Altruistic Apothecary booth, where a man named Nick greeted me. Nick’s face was blanketed by a friendly beard, and a long brown bead necklace dangled from his neck. “Want a brochure?” he asked.

I scanned the paper hesitantly, and Nick asked me if I’d ever been to a psychic expo before.

“Take a walk around to every table,” Nick cautioned me, explaining that I will know which psychic would best be able to help me out. “We’re all a little psychic here,” he explained, some would be better for me than others and that hopping to the first table I see is a rookie mistake.

I gazed around. Most booths were composed of a psychic and their helpers. The helpers often served passer-byers the sales pitch associated to the psychic they were helping. “She is a forth generation clairvoyant” or “If you cannot be read today, we guarantee your money back.” I noticed one booth to the far right, in which a woman called Johanna sat alone at a table. Her booth seemed more authentic than the acts escorted by a sales team, in that you get what you see.

Approaching her booth, she immediately told me I could record her reading with my cellphone, another plus, considering I’d need to record everything for the sake of journalistic accuracy.

She eyed up the camera, and told my partner that he could take pictures so long as she could take a look at them first. She was afraid we’d run something that would look unflattering.

I opted for the 20-minute reading, which included a palm reading followed by a tarot card reading.

After ensuring that I was right handed and not ambidextrous, the palm reading began. My heart line is frayed and short, which told Johanna that I’m a cautious lover. I could see my boyfriend squirm, we had made a pact before going in that we would not disclose that we were dating in hopes that it wouldn’t affect my reading.

“If you had a choice of staying home with a best friend to watch a movie or go out in a big, big crowd, you’d probably pick staying home,” Johanna said. Nailed it.

When she got to my life line, Johanna explained that I will get sick in my middle age, and likely need a major surgery. I will be followed by a spirit during my recovery for a few years, and then carry on with my life.

The bracelets around my wrist mean, I’ll probably live to be in my early eighties. Johanna noted that reading bracelets isn’t a North American tradition, “I don’t one hundred percent believe in this myself,” she explained.

Reading my side hand, Johanna explained that I am to have a baby soon, before I’m married, then eventually get hitched and have two more children. I had to fight back laughter as I watched my boyfriend stare at my hand, having any more than one child is not a part of my life plan, and having one relatively soon is certainly not on the agenda. According to my palm, I may even get married twice.

After the palm, came the ten card Celtic spread. Johanna asked me if I had a question I wanted answered, but I hadn’t thought that far ahead, so I opted for a general reading. For the exercise, you’re meant to pick ten cards, I accidentally only grabbed nine.

Upon turning the forth card, Johanna explained, “this is the beginning of a love story,” assuring me I’d find new love in the next few months, likely by Christmas.

My tarot cards ended with The Sun, which Johanna assured me was a positive place to be, and that despite the gossip and self doubt that had emerged in my reading, I would be confident in my choices and likely be pretty happy in the end.

Leaving the Expo and stepping into the rainy fall air, it felt like I’d left another world behind me. “I hope you don’t actually fall in love with someone new by Christmas,” my partner said as we walked away from the Civic Centre.

I haven’t really thought much about the readings since Saturday, except for when my amethyst crystal fell out of my pocket while I was doing my pre-scheduled laundry. I don’t truly believe I’m going to have a kid soon, or get followed by a spirit for about a decade, but I think that having my future predicted has definitely helped me acknowledge that no matter how many calendars I fill in, or alarms I set, it’s okay to just let whatever happens, happen.