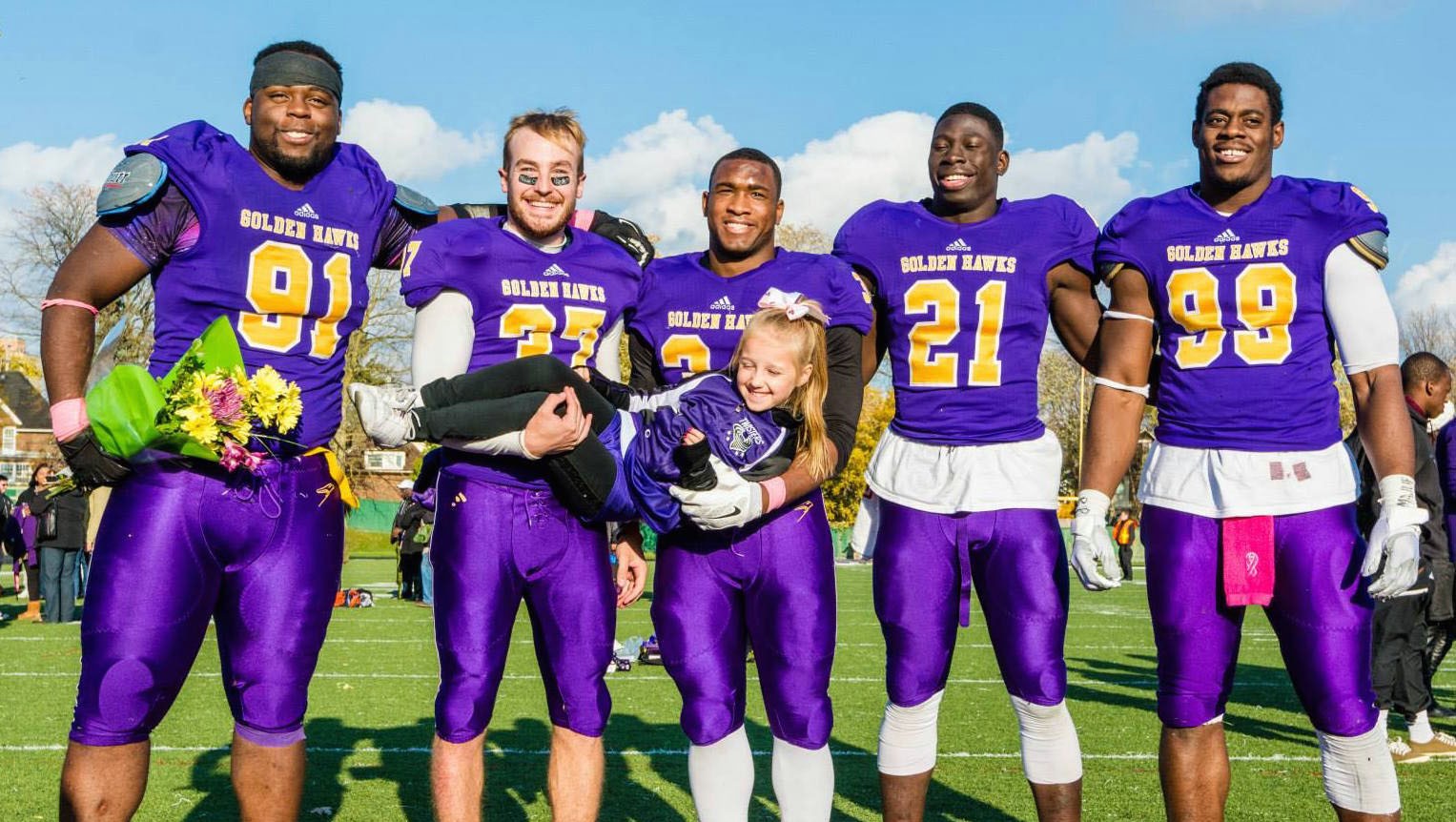 Every single snap has been building up to this, every late night and early morning in the weight room, the nagging injuries, the victories and the defeats. Every battle on the practice field, in front of screaming fans at Knight-Newbrough field and at road stadiums across the province have been building towards this moment.

They’ve spent four years leaving it all on the field for the Laurier purple and gold, and now in just four weeks’time, three Golden Hawks will take the next step in their journey to play professional football. On the weekend of March 27-29, Laurier football standouts Ese Mrabure-Ajufo, Chris Ackie and Dillon Campbell will head to the 2015 National CFL Combine in Toronto to showcase their physical skills in front of CFL coaches, general managers, scouts, and media in hopes of solidifying their position as draft picks in the upcoming CFL draft. Their four years of top-level on-field performances have caught the attention of scouts, earning them invitations to the combine, and now is their chance to show CFL personnel that they have what it takes to make it in the pros.

The weekend will include athletic measurement drills, such as the 40-yard dash to measure speed; the three-cone drill to measure agility; broad and vertical jumps to measure explosiveness and the bench press to measure raw strength. It will also feature positional drills, which allow scouts to compare players’applicable skills against their positional counterparts. The final components of the weekend are team interviews and medical examinations, which allow teams to assess character, get to know players better, and ensure that there are no underlying injuries which may hinder a player’s performance.

The combine is an individual showcase of talent, but the three hopeful Golden Hawks will approach it the same way they have approached everything over the past four years: as teammates, friends, and brothers. These three players share a much deeper connection than their invitations to the combine, and deeper still than the same purple and gold jerseys they’ve donned each Saturday of the last four fall seasons. It is this connection that has pushed them to the position that they are in right now, and what continues to drive them in the pursuit of their goal. “It’s a brotherhood,”says Dillon Campbell, who set OUA single-season and single-game records for rushing yards in 2014.“You grow up together…As the years go on, you grow and you have the same dream to get to this level, you use that to push each other.”

All three players entered the Laurier football program in the same rookie class of 2011, and despite the numerous personal achievements on the field, making it through all four years is what Ese Mrabure-Ajufo sees as his number one accomplishment in football. “Coming in as a freshman, a lot of the vets were talking about how a lot of the guys will come in their first year and do well, and second year they do pretty well — but somewhere in the mix they fall off, either academically or talent-wise, they’re just not hungry enough.”

A lack of hunger has never been an issue for Ackie, Campbell or Mrabure-Ajufo, according to Laurier football head coach, Michael Faulds. Faulds attributes each player’s success to their rare combination of skill and work ethic. “Obviously they’ve been blessed with unbelievable talent, but talent only gets you so far, and they’re at the point of their careers where they’re getting opportunities for pro football because they match that talent with an unbelievable work ethic.”

Mrabure-Ajufo is, as CFL analyst Justin Dunk will tell you, “athletically, a bit of a freak for his size.”He has spent his four years at Laurier amassing 72.5 tackles, utilizing his combination of size and speed to effectively defend against the pass and run. In 28 career games, the Mississauga native chased down opposing quarterbacks for 10.5 sacks and brought down opposing ball-carriers 18 times for a loss of yards, doing so from both the defensive end and defensive tackle positions, and believes he could continue to play both positions moving forward.

“There are two spots I could see myself playing [in the pros],”explains Mrabure-Ajufo.“My home position, defensive end, and then 3-technique defensive tackle.”Dunk, who is one of the most prominent voices in the CFL draft process, shares the belief that he could potentially play both positions, but adds that it is likely Mrabure-Ajufo would make a bigger impact in the CFL if he were to bulk up and move inside to play as a defensive tackle.

Coach Faulds didn’t hesitate when asked if Mrabure-Ajufo could play either position.“Yeah, he could…He could also play 3-4 linebacker…he’s strong enough to play inside and quick enough to play outside, and he’s one of those defensive linemen who, because of his speed, could play special teams.”

In preparation for the combine, Mrabure-Ajufo has been training with Anthony Cannon at Sports Specific Training in Oakville. Cannon, a former NFL-er, was Laurier’s defensive line coach in 2013, where his ‘iron sharpens iron’ mantra struck a chord with Mrabure-Ajufo and set a fire to his play during his last two seasons for the Golden Hawks. Mrabure-Ajufo gives a ton of credit for where he is as a player to the coaching he’s received at Laurier, and explains that he’s modelled his game after two fellow Canadian football players, Cauchy and Henoc Muamba. Neither Muamba brother plays the same position as Mrabure-Ajufo, but watching how hard both train and how aggressively they play has given him something to model his own game after. As far as a positional role model, you only have to look as far as Mrabure-Ajufo’s number 99 for a hint.“J.J. Watt”, he remarks.“Any guy that plays defensive end is going to say, ‘I wanna be like J.J. Watt.’”

Ackie is another defensive standout on the Laurier team, compiling 128 tackles in 32 career games, including five sacks and 6.5 tackles for losses in his four years of eligibility. Similar to Mrabure-Ajufo, he is another wild-card of sorts when it comes to his position moving forward, Justin Dunk explains.“He obviously played defensive back at Laurier, but when talking to scouts and looking at him myself, I think he’s probably better suited to be a linebacker in the CFL.”Ackie, who led the Laurier team in tackles in 2014, is not surprised that he’s being seen as a potential linebacker. The 2014 CIS First Team All-Canadian has actually been told that many times, he says, and adds that, “If I go to linebacker, I still have my defensive back cover skills, and I know I’m big enough and strong enough to hit and play in the box.”

Rather than dwelling on a position change, Ackie has been hard at work, training under former CFL and NFL defensive back, Jykine Bradley for the upcoming combine. “We’ve been doing a lot of stuff with him,” says Ackie of the former seven-year pro.“A lot of explosion training, working on tons of speed.”In addition to the traditional physical training, Ackie has been dieting in an attempt to cut down ahead of the combine, adding that because of the dieting he feels leaner, better, and in the best shape he’s ever been in.

Once drafted, Dunk suggests that Ackie is someone who could“ come in and play special teams right away for you.”While playing special teams may not sound appealing to some players, Ackie lit up at the mention of such an opportunity, “I’d love to play specials to work my way up and earn the respect of my teammates…wherever I go, I’ll ball out on specials.”

Campbell, has left no question in anyone’s mind about his position after two outstanding seasons as Laurier’s feature back. Coach Michael Faulds could not say enough positive things about Campbell’s game as a running back.“He’s tough, he runs really hard, and he’s got great speed…at any point he can take it the distance,” remarks Faulds.“He’s a great pass blocker…on top of that, he’s a dynamite special teams player with his toughness and speed.”

Campbell’s 2014 MVP season, highlighted by his 1458 rushing yards and 13 touchdowns, was incredibly productive and will stand out to scouts, claims Dunk. However, he senses that the Laurier running back will have to improve on his 40-yard dash time from last year’s CIS East-West Bowl if he wants to get a look as a CFL feature back. Matt Walter, a running back for the Calgary Stampeders and someone who Dunk compared Campbell to, ran a 4.65 second 40-yard at the 2011 combine, a number that is certainly not out of reach for the Laurier running back, who is also training under Jykine Bradley.

The OUA MVP from 2014 begs the question of how often someone runs in a straight line for 40 yards in an actual football game, but he added that he is up to the challenge because he knows the 40-yard dash is “a highly-scrutinized test, so I’m excited for that…I’ve been training really hard. I feel ready,” Campbell says.

Campbell’s head-down, work-hard attitude as a player is one that should impress team personnel in interviews over the weekend. Instead of focusing on what other running backs are going to be doing at the combine, Campbell preaches the need to work hard and take things for himself.“I don’t love to compare myself to the other running backs…if I’m in the gym and in my playbook, knowing what I have to do each week, I’ll be prepared that way.”

Despite the differences in their individual skills and traits, this leadership attitude that Dillon exudes is the attitude which Coach Faulds believes sets all three of the prospects apart from their counterparts. “Both coaches and teammates think the world of them,” he proclaims, “All three of them just really lead by example. They’re really hard-working individuals and all three of them were voted captains by their teammates.”

“When we all came into first year, everyone has a goal,” says Ackie.“We want to make the CFL. Especially the group of us, we all had the same goal; when you come out of a class with forty guys in your rookie class, guys come and go; but us core guys, we’ve always stayed together.”

Two of those core guys from the 2011 rookie class that Ackie mentions have yet to receive an invite to the National Combine. Ronnie Pfeffer, second-team CIS All-Canadian kicker/punter, and Asante Mizan, another stand-out player on the Golden Hawks’defensive line, each will be attending the Toronto Regional Combine on March 26, a day before the National Combine begins. Last year, 14 players from three regional combines across the country were selected to attend the National Combine, 13 of whom were drafted by CFL teams.

Pfeffer and Mizan will look to follow in the footsteps of former Laurier offensive tackle, Tommy Griffiths, who attended the Toronto Regional Combine in 2014 and recently signed a contract with the Winnipeg Blue Bombers.

“If you could take one teammate from Laurier along with you to the same CFL team, who would you choose?”Ackie, Campbell and Mrabure-Ajufo each laugh at the question, but then pause to think. “I feed off a lot of players…I can’t pinpoint one player, I wish I could bring them all,” Mrabure-Ajufo says.

“Those guys are some of my best friends, over the years I’ve always been close with them. We’ve all pushed each other over the years, and I think that’s why we’re in the position we’re at now,” Ackie explains. They may not be able to bring them all to the same team, but with good performances at the combine, all five could very well hear their names called on draft day