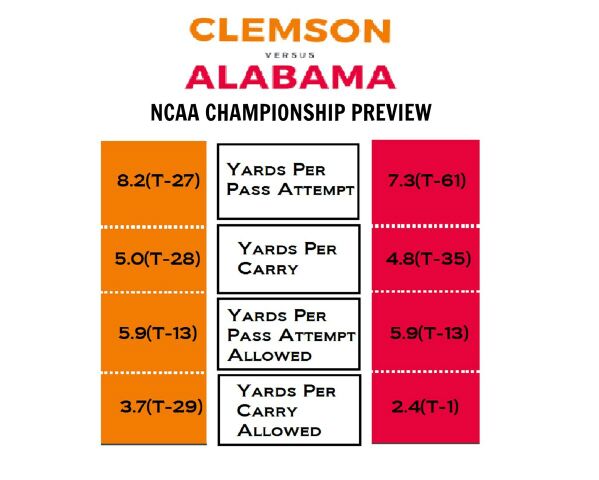 Next Monday, a match-up between #1 Clemson (14-0) and #2 Alabama (13-1) will feature two teams that appear to be polar opposites. Fans of spread offenses will be able to cheer for Clemson which is led by the one of the top quarterbacks, Deshaun Watson. For those who prefer football to be a game of toughness and power running, Alabama and the Heisman Trophy winner Derrick Henry will be the perfect representation of this style.

When Clemson have the ball, they will be facing a defence that has struggled at times against spread offenses. Alabama lost their only game of the season to an Ole Miss team that plays a similar style to Clemson. The Crimson Tide will have to stop a Clemson offence that is led by Watson, who became the third player in NCAA division 1 history to pass for 3,500 yards while also running for 1,000. Fellow sophomore star Wayne Gallman has been impressive running the ball as well as rushing for a school record 1,482 yards this season. The two will face their toughest test of the season against the Alabama front seven.

Alabama has always been a hard team to run against, and that tradition has continued this season. Junior Defensive tackle A’Shawn Robinson was a consensus All-American this season as he anchored the line. The true leader of the defence is senior linebacker Reggie Ragland who was named a unanimous All-American. The rest of the Alabama front seven has been just as strong helping to hold opponents to an NCAA best 74 yards per game and only 2.4 yards per attempt. In their semi-final against Michigan State, the Crimson Tide defence shut out the Spartans and limited them to only 29 total rushing yards. If Clemson wants to score against Alabama, they will need to either find a hole in the brick wall that is the front seven or throw over the wall, which Watson is very capable of doing.

The other big star in this game will be Derrick Henry, who dominated all season. The junior star could be playing his last game of his career and will be looking to continue his strong play, which has resulted in over 2,000 yards to lead the country and an average of over five yards per carry. At quarterback, Alabama will be relying on fifth year senior Jack Coker, who transferred from Florida State. After earning the starting job this year Coker has played well including a great performance against a respected Michigan State pass defence.

The Clemson defence is consistently overlooked because of the offence, but this season they were dominant as they helped Clemson go undefeated. Their performance against Oklahoma’s offence, which had been rolling with Baker Mayfield late in the season, proved they can dominate elite competition. Defensive end Shaw Lawson, a consensus All-American, missed most of the game due to injury, but has said he will be ready for Alabama. Lawson has helped Clemson continue their recent tradition of strong defensive line play which will be crucial in limiting Henry.

The Championship game will provide an interesting clash of styles that should draw in both casual and hardcore fans, and more importantly, deliver an exciting game.