“Legally Blonde” on the stage 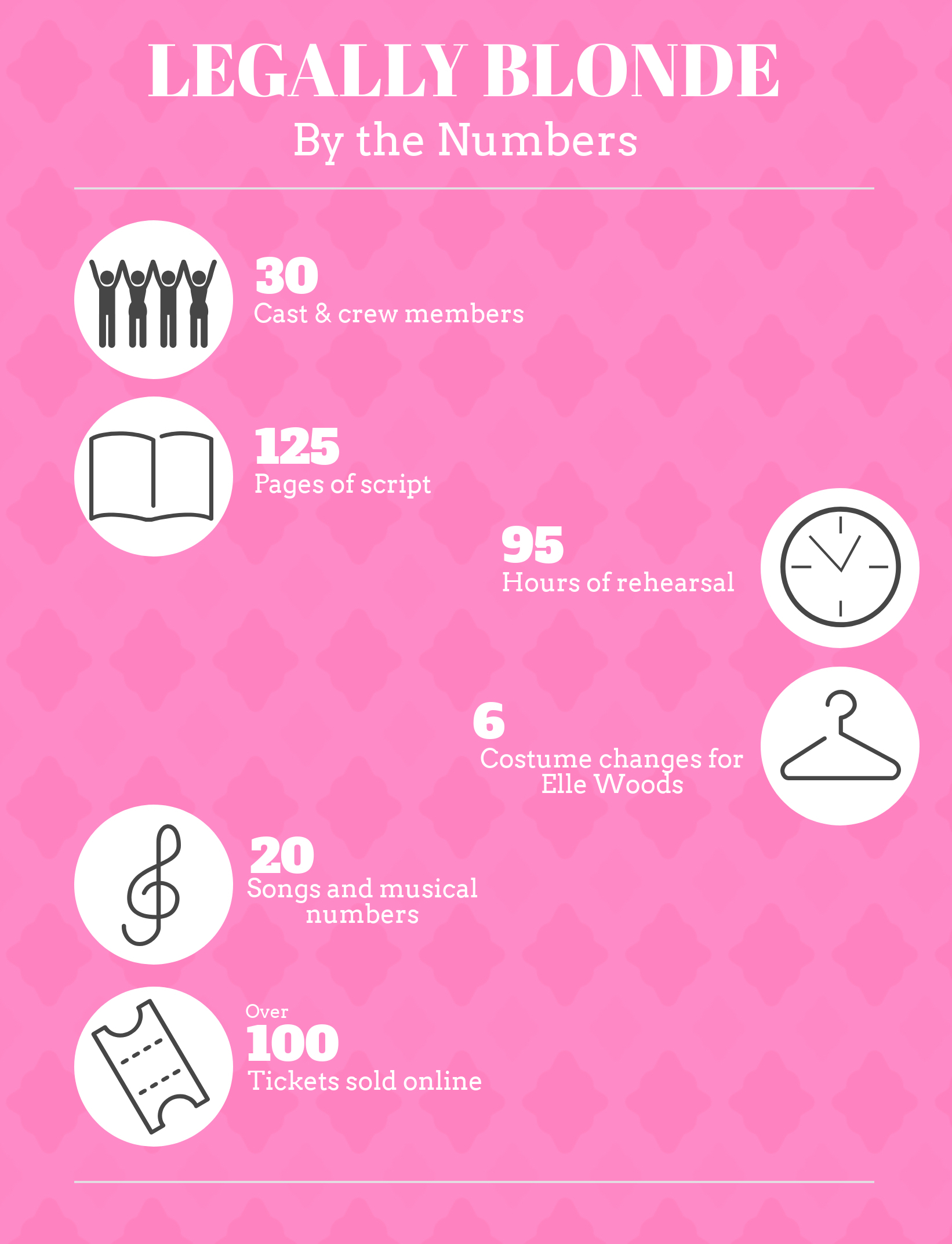 “Omigod, you guys!”, Laurier Brantford Musical Society brings the infamous Elle Woods and cohort to the stage in Legally Blonde the musical.

On Friday, January 25, the Laurier Brantford Musical Society – a new club on campus — put on its first production of the hit Broadway musical Legally Blonde at Brantford Collegiate Institute.

The musical, which is based on a novel and popular film of the same name, tells the story of Elle Woods, a sorority girl who enrols at Harvard law school to try and win back her ex-boyfriend. Along the way, Elle learns to value herself for her mind rather than just her appearance and social status.

“In first year I noticed there wasn’t any clubs available that incorporated singing, dancing and acting, and I always had a deep love for theatre. I was talking to someone on the English Association about the process of starting a club, because one of the reasons I came to this campus was because of the leadership opportunities,” said Menna.

On top of being director and club founder, Menna also played the role of Paulette, Elle’s hairdresser friend. “Because we have such a small campus and I feel like not a lot of people will come out and do clubs, especially ones where it’s a huge time commitment, we didn’t have as many people as we needed for the roles,” said Menna. “So I just kind of stepped in wherever need be, because I was like, ‘this is happening, I’m doing whatever I can.’ At first I was kind of scared, because the role is supposed to be campy, and I’m not, [but] it’s been fun. I had a really great time.”

Mitchell Onyedikachi, a fellow student, went to the show to support a friend. He believes that events like this are a great and important way for students to de-stress during the semester. “I think they did a really good job with this one and I would love to see more,” said Onyedikachi.

In this production, the role of Elle was played by a supremely comedic and energetic Haedan Reid, who studies forensic psychology when she isn’t performing. Reid’s impressive vocal range and stamina made it clear why she was chosen for the role.

Other standout performances included those of Emily Ernst, who played snarky mean girl Vivian; Rachel Maguire as fitness mogul and accused murderer Brooke Wyndham; and Menna themselves as quirky Paulette.

Emily Wilbur, a second-year business technology student, played numerous ensemble roles in the production. She believes that having clubs and programs like this is important on a campus like Laurier Brantford. “It builds such a great community,” she said. “I’ve made so many friends here, [but] I think it needs more funding, to be honest.”

Menna echoed this sentiment. “Funding is definitely an issue, especially for non-faculty clubs,” they said. “The rights cost anywhere from 2000 to 2500 dollars, and the clubs are given a budget of maximum 300 dollars.”

Due to lack of funding, the team admitted that their production was low budget. Props were minimal and the sets were very basic. Despite this, said Wilbur, “we’ve worked really hard to use the money that we got well.”

Menna, whose immense dedication to the production was evident, even put some of their own money into the show – money that they admit they may not get back.

“Realistically, unless we come into more money winning another bursary or grant, I’m not sure about the future of this club, which is really sad,” they said. “And I feel like because it’s an arts school or a humanities school, like any university we should have outlets for creativity and expression.”