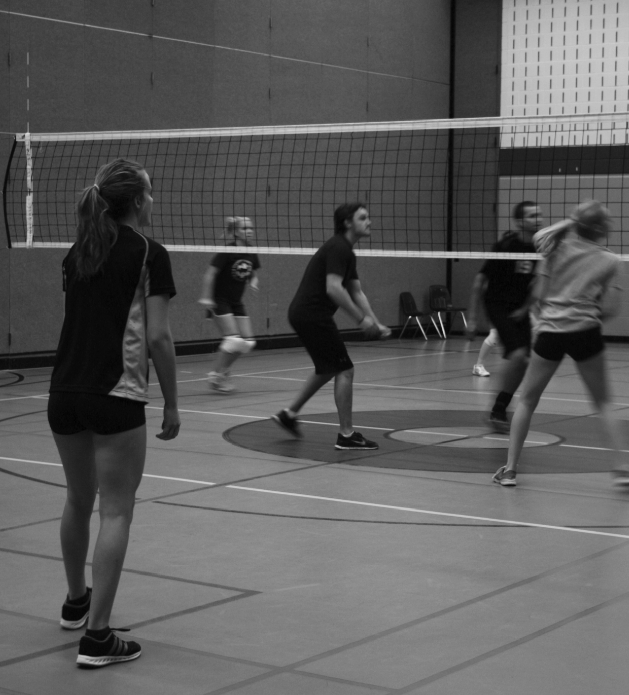 “It’s a fun way to get exercise, meet new friends … sometimes you get free stuff,” said Jenna Wilmot, a first year on the women’s hockey team.

Exercise, friends, free stuff … what more do you need, right? Let’s face it, Laurier Brantford does miss out on the excitement and overwhelming school spirit that varsity sports bring to the table, but for a small, tight-knit campus like Brantford’s, extramurals can be the perfect thing.

“Because we have such a small team, we’re able to bond faster and learn each other’s playing style,” said Megan Elmhirst, a member of the co-ed dodgeball team.

The team was able to put its bonding and skills to use in a tournament they hosted on their home court at Laurier Brantford on Nov. 12 and made it all the way to the semi-finals. They also represented Laurier in a tournament in October and have one more to come in January.

“The advantage of sports here is that it allows people who are not amazing but overall good to represent the school and feel like we represent a campus, something that only high level — OHL and Jr. B Elite — players can do on main campuses,” said men’s hockey assistant captain Michael Bondy.

“It is good for if you would not make a varsity team anyway, but you would stand out too much at intramurals,” added Bondy’s teammate Tyler Armstrong. “Extramurals are a good mix between the two. And it’s a good level of hockey.”

The men’s team has celebrated a few victories in their tournaments at Sheridan and Humber North in November. Both the men and women’s teams look forward to hosting tournaments on home ice at the Civic Centre in February.

“It [hockey] has always been something I’ve loved doing at a competitive level and the team here allows me to continue playing at a high level while I still can,” said Bondy.

Another advantage is that athletics here are enough to keep dedicated athletes from being deprived of their passions, but they’re also not as time-consuming as varsity sports would be.

“It’s not as much, so you can balance school and whatever else,” said Wilmot.

A small campus doesn’t mean that all of its sports have a lighter skill level than larger universities. One team with strong proof that small is mighty is the cheerleading team.

Last year the team placed first in the Open and University National Cheerleading Championships. They also won first at the Maple Leaf Championships. This year’s team of twenty-one is just getting started and will work hard this season to be defending those titles.

“I’m excited about how quickly all of the stunt groups are advancing,” said the team’s captain, Serena Michelle. “There’ve been a lot of personal goals achieved so far.”

The team practices twice a week plus optional Thursday night practices to work on skills such as tumbling and stunting.

“My favourite thing about cheerleading is the bonds that are formed and how everyone works so hard so support each other,” Michelle said. “When a group is trying a new stunt, the whole team is there to watch, lend a hand if needed, make sure everyone’s comfortable and cheer them on.”

Laurier Brantford sports are growing. This year the campus brought in a women’s extramural basketball team. The team ventured off to their first ever tournament on Nov. 6 at Humber North. The team started their season off strong as they finished the tournament in third place.

The co-ed volleyball team made a successful season debut in October as the team finished third in their tournament at Redeemer University College. They have two tournaments to come, one at Centennial College and the other at Humber Lakeshore.

But the team’s fun doesn’t stop there. Unlike other extramural teams at Laurier Brantford, the volleyball team has the opportunity to play weekly games in an adult league every Monday night.

The co-ed soccer team also succeeded in their first tournament of the year on Nov. 6 as they claimed third place at Humber Lakeshore. The Golden Hawks excelled in their round robin play, including an 8-1 win over Canadore College. Competition became tougher for the Hawks as they faced UTSC in the semi-finals. Laurier was sent home after a hard fought battle. Their next tournament will be Jan. 15.