Many Laurier students are quarantining in their dorms with a melody stuck in their head and dreaming of the day they get back onto the stage.

Hunter Martin, a Laurier student, is one of them.

Martin is a guitarist, singer and songwriter—a triple threat.

Martin attended St. Roch Catholic school in Brampton, Ontario, where he found his own musical style. Throughout high school, he produced beats and performed songs around the city with his band.

Martin’s passion for music is so strong that he decided to pursue his love of music at Laurier.

He’s in third year of the Integrated Musical Arts program, which aims to educate students on understanding how various types of music is produced.

Martin’s favourite thing about music is the emotional side.

Like many artists, he was inspired by his favourite childhood artists, but his mother is his biggest inspiration that led to his love of singing.

“I was never scared to sing […] my mom was always singing so it made me want to sing more.”

Martin remembers always singing for fun until he turned 7 years old, when he had his first real performance. He had performed for his fellow campmates, and his camp counsellor asked him to perform at the camp talent show—sounds like a real-life Camp Rock. 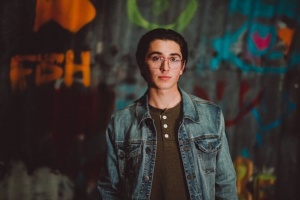 “All the music that I used to listen to, I always felt really connected to it and when I sang along to it, it just felt like I should be doing that,” said Martin.

Some of his influences include Led Zeppelin, Pink Floyd and Chris Stapleton.

When it comes to his creative process, he usually hears a melody and will sing over it, other times he will first come up with the chord progressions himself then sing over it.

“I will either write the lyrics to fit the song or I will take lyrics I already have and try to make it fit the melody; which is actually the best way to do it,” said Martin.

He’s also a member of a band called, Chance of Reign.

Chance of Reign released a new single on Spotify and Apple Music called, Addicted to the Energy. They also have a new single coming out on Valentine’s Day.