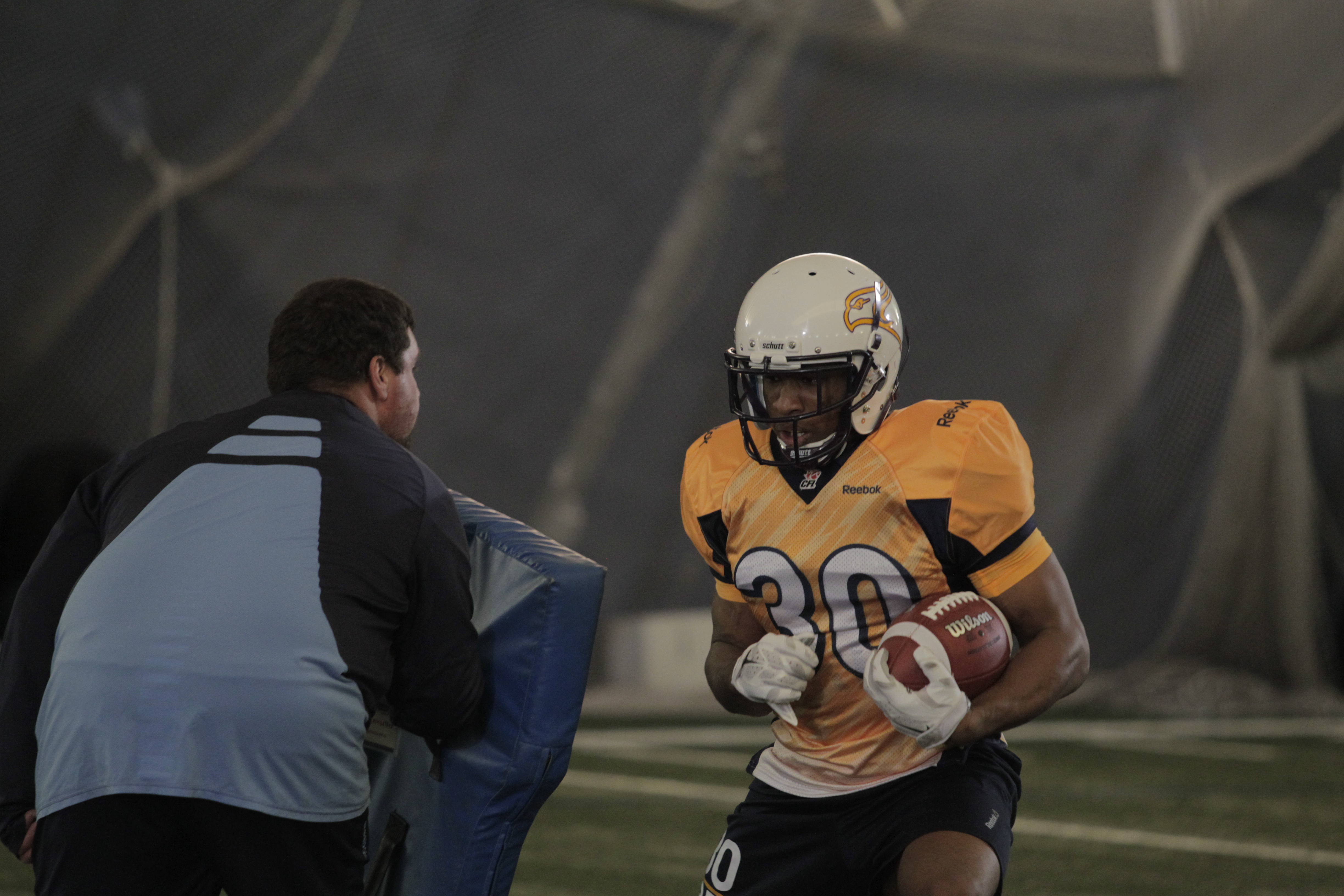 Four years ago, Anton Bennett and Shamawd Chambers were two of the premier offensive players for the Laurier Golden Hawks football team. Now, four years later, they were on site to watch three players of the 2011 recruiting class show off their talents at the CFL national combine.

Bennett, who played running back at Laurier from 2009 through 2011, recorded 521 all-purpose yards and four touchdowns in his junior year in 2011, while Chambers racked up 36 receptions for 562 receiving yards and five touchdowns in his senior season, solidifying his resume ahead of being selected 6th overall in the 2012 CFL draft.

Prior to that season, though, the two veteran players were tasked with the responsibility of taking prospective Golden Hawks on recruiting trips. This entailed taking players out for dinner, showing them around campus and answering any questions that the high school seniors had about the school and football program.

Three of the players that Bennett and Chambers took on those recruiting trips are the three who impressed scouts, coaches, and media at the CFL National Combine this past weekend. Chris Ackie, Dillon Campbell and EseMrabure-Ajufo were all part of Laurier’s 2011 recruiting class, and before they were star players, they were wide-eyed rookies.

Ackie was the talk of the combine after day one, recording extremely impressive numbers in the broad jump (10’11.5”) and vertical jump (40.0”) events. On day two, Ackie ran a slightly slower 40-yard dash time than he had hoped, but he impressed in the 1-on-1 drills for both linebackers and defensive backs, showing off his versatility and ability to play both positions at a high level.

“I know that I have the ability to do better, especially with my 40,”said Ackie, following the second day of workouts.“I was a little disappointed with that, but at this point, it is what it is and I have to move on.”

Chambers echoed this sentiment, but was quick to point out how well all of the players performed over the course of the weekend. “I thought Chris should have ran a bit faster, he thinks so too,”said Chambers. “But they tested extremely well and I’m really proud of all of them.”

Chambers entered the 2012 CFL draft as the third ranked player, and he knows all about being a top-ranked prospect, the importance of the combine and how difficult it can be making the transition to the next level.

“Sometimes being a good CIS receiver, CIS linebacker or whatever you are doesn’t really translate to being a good CFL player,”said Chambers. “So it’s important to show that you’re a great athlete because once you get to the next level, everyone’s on the same playing field as you or maybe even better.”

EseMrabure-Ajufo was out to prove exactly that to scouts over the weekend; he also impressed with his athletic numbers on Saturday, when he ranked first in vertical for defensive linemen by and third in broad jump.

Mrabure-Ajufo is seen by many scouts as a “tweener,”a player who could play two different positions –defensive tackle and defensive end –but does not necessarily fit either one exactly. In his time at Laurier, Mrabure-Ajufo played both positions, and he performed well at each position during the 1-on-1 session between offensive and defensive linemen.

“The coaches told me what they wanted to see and I came out here and did as much as I could,”said Mrabure-Ajufo.“Some of the coaches tapped me on the shoulder and said ‘good job, that’s what we’re looking for,’so overall it was a good day.”

Prior to the combine, CFL.ca insider, Justin Dunk had said that in order for Laurier running back Dillon Campbell to get a shot as a CFL running back, he would have to significantly improve his 40-yard dash time from the East-West bowl in May, where he ran a 4.88 second time. The 2015 OUA MVP came out and responded with a 4.57 second time at the combine, recording the second-fastest time of all running backs at the event.

Campbell also improved his draft stock in the positional drills, where he showcased his ability to pass block and catch passes out of the backfield, two traits which Laurier head coach Michael Faulds believes sets his former running back apart from others.

“The crazy thing is, one of the guys I took on recruiting trips was Dillon Campbell,”said Anton Bennett. According to Bennett, the Golden Hawks running back was a dedicated worker from the day he arrived at Laurier, something which paid off with his huge 2014 season. “A lot of people were caught off guard because [his success] came out of nowhere,”explained Bennett“But he was always that good, he just need a shot, and he got that shot.”

Now the waiting game begins for these three talented players, as they wait for the CFL draft on May 12. All three of the players have spoken with at least eight of the nine CFL teams ahead of the draft and could be selected by any one of them.

Four years after meeting Chambers and Bennett, Ackie, Campbell, and Mrabure-Ajufo, they’ve completed their last team effort as GoldenHawks and prepare to take on professional careers of their own.“It meant a whole lot to me,”explained Campbell, when asked what it meant to have his teammates at the combine with him.“Coming into first year those were the guys I trained with; we watched each other and grew together, so it’s good to see all the hard work we put in through our years at Laurier paying off.”