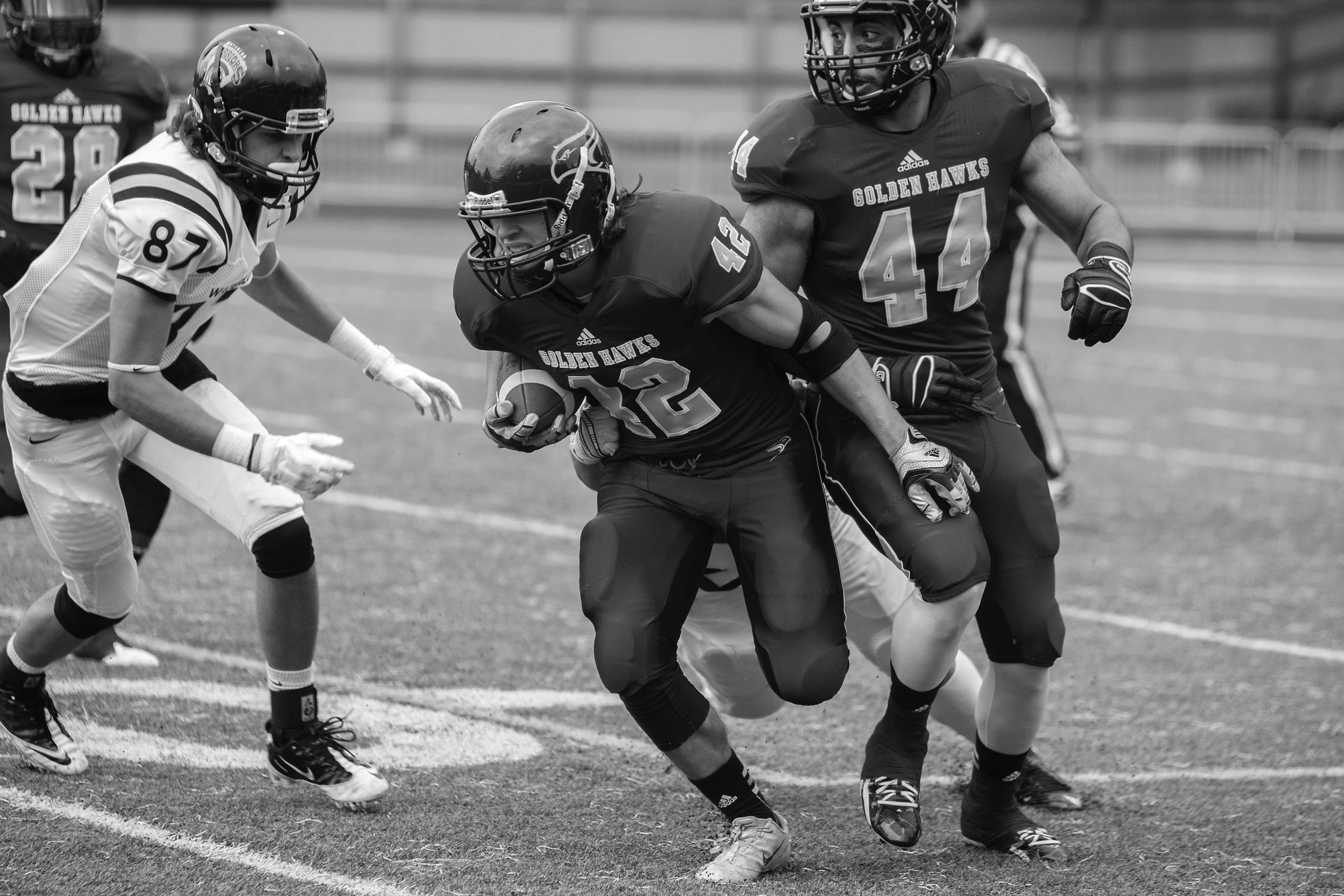 In no time the Golden Hawks’ men’s football team has surpassed their 2013 single game win total. Laurier has to be pleased with their 2-1 start that sees them holding down a fourth place spot with Carleton, who they will be playing this upcoming weekend, in the OUA West division.

Carleton also has to be pleased with their record, which is a complete turnaround from 0-8 in 2013 when they played CIS football for the first time since 1998. The Ravens will step onto the field at University Stadium on a high, coming off a huge win against cross-town university rivals Ottawa U in the annual Panda Bowl. With under ten seconds left quarterback Jesse Mills found Nate Behar on a 55-yard Hail Mary for the victory.

Meanwhile, the Golden Hawks had the week off, something Coach Michael Faulds is happy to have. “We’ve got some guys that were injured [are now] healthy again and that’s the great thing about a bye week,” he says. “And we get some of our young guys even more experience.” This gives the second and third-stringers most of the reps in practice while the veteran starters take a bit of a break to stay healthy for the rest of the grind of the football season. “As a whole I think we’re going to be that much stronger [because of the week off].”

The offense is shining through four weeks of the season, ranked top ten in the country in yards gained and points scored and second overall in Canada in yards rushing, thanks to the continued dominance by running back Dillon Campbell. No one can catch him on the field and his stats off of it reflect that. Campbell leads the CIS in rushing yards with 674 – 200 more than second place Ashton Dickson of St. Francis Xavier University.

This has really opened up the field for second-year quarterback James Fracas who has built on the confidence he received at the end of last year when he finally seemed more comfortable with Faulds’s new offensive schemes. “[Fracas’s] confidence is now through the roof because he knows now why we’re calling certain plays and what we’re looking for as a coaching staff,” Faulds explains. “He’s distributing the ball to all our playmakers.”

However, discipline has been a real issue for the purple and gold. The team leads Canada in most yards allowed on penalties (452 yards) and second-worst in number of penalties taken (44). It’s the little things like penalties that are increasingly becoming a big problem for the Golden Hawks that will kill their hopes of playoff success.

Coach Faulds wants his team to be high-energy and play hard, but there’s a fine line and they’re crossing it, committing too many late hits and swearing penalties. The good teams know how to control this and against teams like Western and McMaster, giving them free yards won’t end well. “There’s probably eight to ten penalties this year that were just stupid,” Faulds says. “These are things that we can eliminate and these are things that I stress to the guys on Sunday and hopefully we can clean that up by the time Homecoming comes around.”

The thousands of screaming Laurier students and fans hope so, too. The Golden Hawks should be the favourite on Sunday and bring lots of fireworks on offense. But it will be the defence and team discipline that will close out games. And although it’s early, the Golden Hawks, on the backs of Fracas and Campbell, should finally return to meaningful football in October.