Exploring the spectrum of sexuality 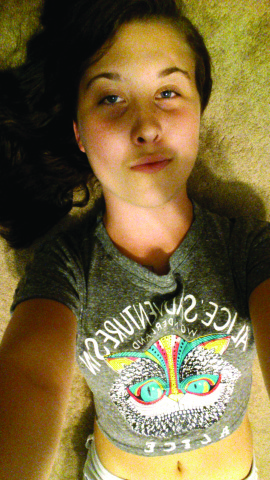 When joining Tinder you never really know what to expect. I’ve read about complete horror stories: people who can’t take no for an answer, stories regarding sexism and harassment. I didn’t know what my experience would be, but I was definitely not expecting it to be any better than those horror stories. I certainly wasn’t expecting to find a story so thought provoking and touching that it would open my eyes to a whole new perspective on sexuality.

All the information quickly overwhelmed me. I have never looked at sexuality beyond heterosexuality and homosexuality, then to discover that there is a whole spectrum of sexuality? I was trying to wrap my head around it all. I was embarrassed by how naive and ignorant I was on this topic. I felt out of my league on this issue. So I decided to share that moment of honesty with McCullen. “It’s ok to be ignorant,” she said. “But it’s not ok to want to stay ignorant,” I added. “Exactly,” she agreed.

“So how does your sexuality effect your social relationships?” I asked her. Because, I imagined that explaining this to family and friends must have been a collective of frightening moments.

“For the most part my friends have been understanding … I had to explain to my mom twice before she grasped what it meant,” McCullen told me.

McCullen detailed all the misconceptions out there for me, “If I had a dollar for every time I heard the joke ‘Oh so you’re just a plant”, I’d be rich … another misconception commonly brought up is that it’s a phase or that I just haven’t found the right person … or that they have a hormone imbalance – which is very rarely the case – sex drive or libido has nothing to do with orientation, or that they’ve been abused in some way, which again can be the case, but that doesn’t invalidate asexuality, or that they’re holding virginal standards.”

An intimate relationship for McCullen matched any other type of relationship, “I like the emotional aspect of the relationship but it never got past any major physical aspect … the most I’ve ever done was make out, but even while I was doing it I’d ask myself ‘What’s the point of this?’” Sara describes herself as biromantic, which she explains is along the lines of bisexual; being romantically attracted to both male and female but without the sexual attraction.

“Did you ever feel that there was something wrong with you before realizing what asexuality was?” I ask.

“Oh my goodness, for the longest time I did not know what was wrong with me. When I first realized the term for what I was I cried,” she said, looking a little teary eyed again. I couldn’t help but empathize with what she went through. Imagine not truly discovering who you are until 18 years into your life. “I didn’t realize the term for what I was until last year when I watched this documentary on Netflix [ [A]sexual ] … I want to bring awareness to this topic because there are so many misconceptions that need to be laid to rest, maybe there is someone out there who needs help realizing what they’re going through.”

It is Asexuality Awareness week until October 25. If you’re looking for more information on asexuality go to www.asexuality.org or check out the 2011 documentary (A)sexual, directed by Angela Tucker on Netflix.