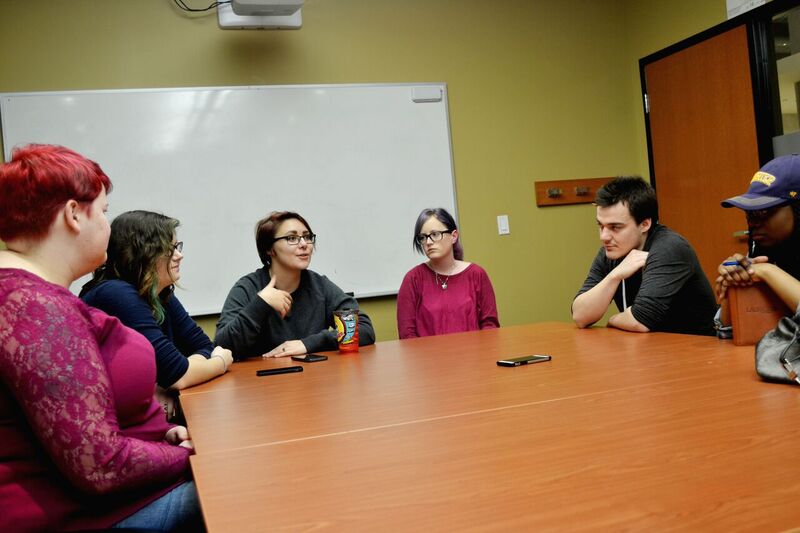 “There are no GAY scenes. There are scenes with people in them,” said television producer and writer, Shonda Rhimes while clapping back to an ignorant Twitter hater last year. She decimated this person by saying if they have this need to point out “gay scenes” as too much, not only are they late to the party, they’re not even invited anymore.

Laurier’s Rainbow Alliance invites us all to this LGBTQ party, where we discuss everything from sex, to relationships, to life obstacles seen within LGBTQ lives.

If you identify as he/him describe what you believe masculinity to be, and how has that changed from what you thought masculinity was growing up?

Will Thompson: “Masculinity has always been that lumberjack persona and when I came out I had to move away from that. I ended up watching 1 Girl, 5 Gays because once I came out I was like ‘ok, how do I be gay?’ For two years I acted super flamboyant because that’s what I thought being gay was, and then I realized that isn’t mandatory, I can act however I want. Masculinity for me now is this [gestures to self]. I am my own masculinity.”

For those that identify as she/her, what is your definition of femininity, and how has that changed from when you were growing up?

Nevena Rakic: “Being a queer woman makes femininity difficult, because other queer folks expect queer women to be a little more on the masculine side.”

Danielle Jurgens: “I get that for sure, people call me butch, gold-star lesbian just because I’ve had really short hair … my gender is pretty fluid, so today I feel feminine but other days I’ll feel more masculine.”

As someone who is gender fluid how has masculinity/femininity put constraints on how you identify?

Taylor Simmons: “I usually just wear whatever I want.”

Nevena Rakic: “I think we’ve been socialized our whole lives to be either super feminine or masculine. Why does it matter?”

What was your most memorable ‘coming out’ moment?

Will Thompson: “When I first came out to my mom, she was driving me to work and she confronted me and asked me [if I was gay] and I said yes, it’s a thing that’s happening in my life. She cried for 20 minutes and kept asking me, ‘why?’ She told me, ‘I guess as a parent ignorance is bliss.’ That taught me don’t tell anyone.”

Taylor Simmons: “I never really had to come out to my parents. They just knew, I brought a girl home one day and introduced her as my girlfriend. My dad said ‘well at least she won’t get pregnant.’”

What misconceptions are there about gay/queer sex that you want to shut down right now?

Taylor Simmons: “Well, scissoring is not a thing!”

Danielle Jurgens: “Even lesbians can get STIs.”

Melissa MacNaughton: “Anybody can get AIDS it doesn’t matter your religion, your race, your sexuality.”

Danielle Jurgens: “Viruses do not discriminate.”

What are one of your most awkward sexual moments?

Danielle Jurgens: “I invited this girl that I liked up to my cottage and she was a real party person so we went along the beach inviting kids our own age to a bonfire at this beach. We ended up playing truth or dare and I got dared to kiss this guy. Something which I have never done before. I was like ‘I don’t really want to do that’ but you know it was a dare and the peer pressure so I ended up doing it, it was horrible and wet. It was the worst moment. So it kind of reaffirmed my gayness.”

Nevena Rakic: “Being queer and growing up having to change with other girls was literal torture. It was like ‘do you think I’m looking at you?’ I don’t know what these feelings are that I’m experiencing.”

What benefits of same-sex relationships do you think hetero-couples overlook?

Melissa MacNaughton: “There isn’t as much pressure. In a stereotypical relationship between a guy and a girl. The guy pays for the date, he asks the girl out, with same-sex couples there isn’t that pressure to conform. There’s more room to be who you are.”

Nevena Rakic: “I live with my partner so a lot of stuff is so much easier, when I don’t know what to wear I just go into her closet.”