‘You are Beautiful’: the ugly truths 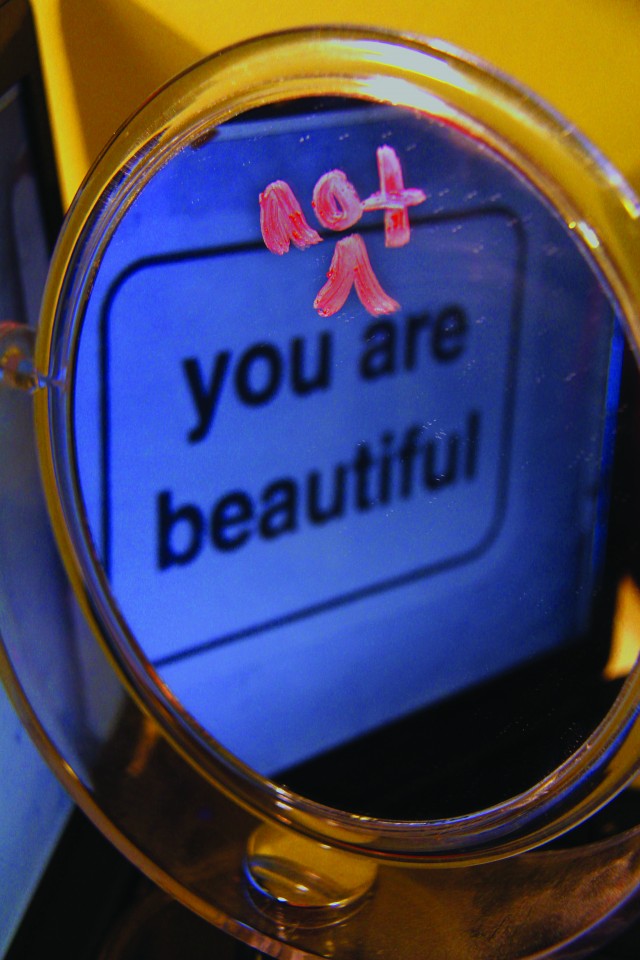 Let’s face it, a compliment’s persuasive capability is largely lost when it’s delivered via the medium of sticker. It’s safe to assume there are few people on the other side of this argument, however, one case has slipped through the cracks; the propaganda-esque ‘You Are Beautiful’ campaign, which encourages young, virile girls to plaster the above message to every barren surface. Admittedly, the people who came up with this almost aggressively egalitarian plan, had good intentions. Young women today display worryingly low levels of self esteem, high instances of eating disorders, and even show signs of severe depression. It’s indisputable that they need to be taught self valuation, yet this organization hits every sour note possible, while fumbling towards an otherwise noble goal.

The first major misstep is failing to realize how heavily loaded the word ‘beautiful’ is. In it’s most basic, traditional sense, beauty has always been used to describe a culturally accepted aesthetic appearance, exclusionary at its core. It’s a definition that girls of this generation know better than almost any other. While boys are showered with the compliments that they’re strong, smart and capable, little girls are used to hearing the same echo, look at you, you’re so pretty, so cute and so beautiful. There is never any mistake as to what beautiful means or how absolutely central it is to being loved and respected. It is so thoroughly ingrained that trying to refurbish and reclaim the word can only lead to messy misunderstandings, mixed signals and further confirmations of an impossible standard. By telling those who are happy, confident, yet knowingly not beautiful in the traditional sense that they are in fact beautiful, it can’t help but come across as insincere, condescending, but also dismissive of the other qualities they’ve cultivated. One article in the Atlantic highlights this; in it, a high school teacher creates a survey for her eleventh grade, all female class. The only question asked, which would you rather be, smart, kind or beautiful? Terrifyingly, approximately 97 percent of the participants chose beautiful, meaning only one strayed from the norm. The simple fact that ‘you are beautiful’ is seen as a greater goal, or a more powerful compliment than ‘you are kind,’ or ‘you are smart’ should be chilling.

The second and possibly most problematic component of this campaign, is the current reality that abandoning the quest for conventional beauty, will quickly put you on a short list of psychologically troubled individuals. Honesty, as it turns out, in this realm anyways, is seen as a cry for help, rather than refreshing. This only further emphasizes the importance of beauty in its most unhealthy form. For example, If a woman admits she can’t sing, is terrible at math or can’t cook, people chuckle and move on, but if a woman lets slip that although she may love herself, she doesn’t feel particularly ‘pretty,’ people panic like the Matrix’s been breached, and rush to protest, only further perpetuating the idea that to be truly homely is akin to a death sentence for the feminine individual. It’s surprisingly easy to find high profile examples. Hilary Clinton’s ‘cold’ face and ‘ugly’ pant suits were constantly talked about during the 2004 presidential campaign on the news, and even pointed out by a fellow contender in a debate. Successful entrepreneur, media mogul and philanthropist Oprah Winfrey has constantly been scrutinized because of her weight.  Supreme Court Justice and former Harvard Dean Elena Kagal has been publicly criticized because of her ‘butch’ appearance, with some suggesting she didn’t deserve the position because of this. Beauty, as it turns out, is almost always on the minds of ordinary citizens when it comes to women and no matter how utterly irrelevant or uninterested those in question are about such recognition, it is a focus they can never seem to shake.

Lastly, the realities of privilege, bias and differentiating experience, are completely swept under the rug when we refuse to admit that those who fit inside the realm of beautiful often have very different perspectives than those who do not. This type of radio silence, unfortunately, can not only squash honest discussion, but it can also leave both sides bitter and unaware of the other’s plight. Beautiful privilege, as it turns out, much like white privilege or male privilege, is titled as such because those on the receiving end are often unaware that they are. The Beauty Bubble, a phenomenon parodied by shows like 30 Rock, is a very real thing says researchers. Known in the academic realm as the ‘Halo Effect,’ psychologist Edward Thorndike found that our positive first impression of an individual can cloud our judgement. More recent studies by Pennsylvania University’s Ingrid Olson finds that pretty people are naturally matched to positive yet unrelated words, making them more likely to succeed. Economist Daniel Hammermesh found beautiful people make on average 3 to 4 per cent more, compared to their ordinary business counterparts. All of this brings up a very practical question, if it really is the case that we’re all beautiful, it must mean that some are more beautiful than others, and doesn’t actively denying this fact seem even more sinister and unkind than embracing the truth? Or, do we need this pretty lie to keep the brutal reality at bay?

In all honestly, the reasonable answer to the latter is no. Nobody is suggesting it’s kosher to walk up to complete strangers and tell them they’re ugly, but what we must come to terms with is that insincere compliments are only masking the bigger issue. An issue, which as it turns out, isn’t whether all women are equally aesthetically pleasing in the eyes of external spectators, we know the answer. Rather, what’s most troubling, is that even the most progressive amongst us seem to think beauty matters so damn much.