Where the trail ends down memory lane 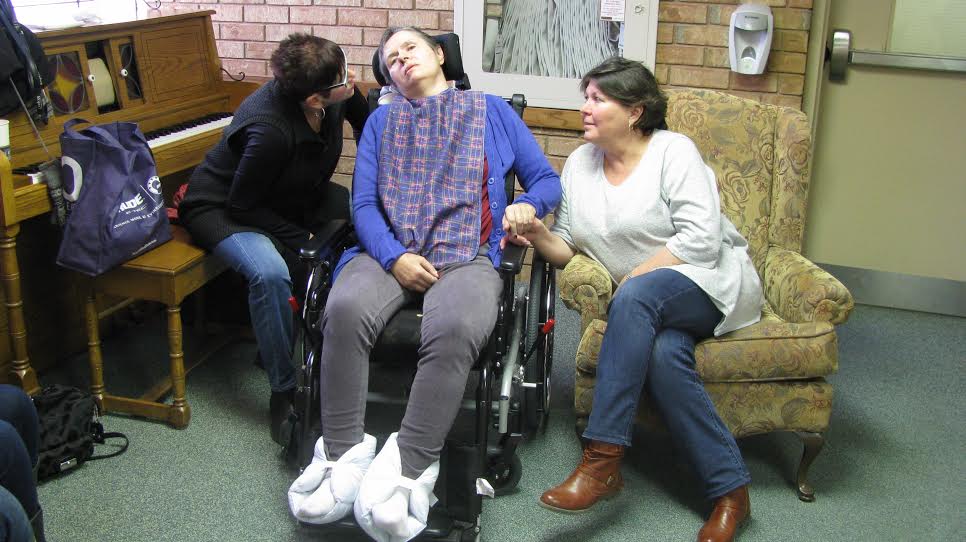 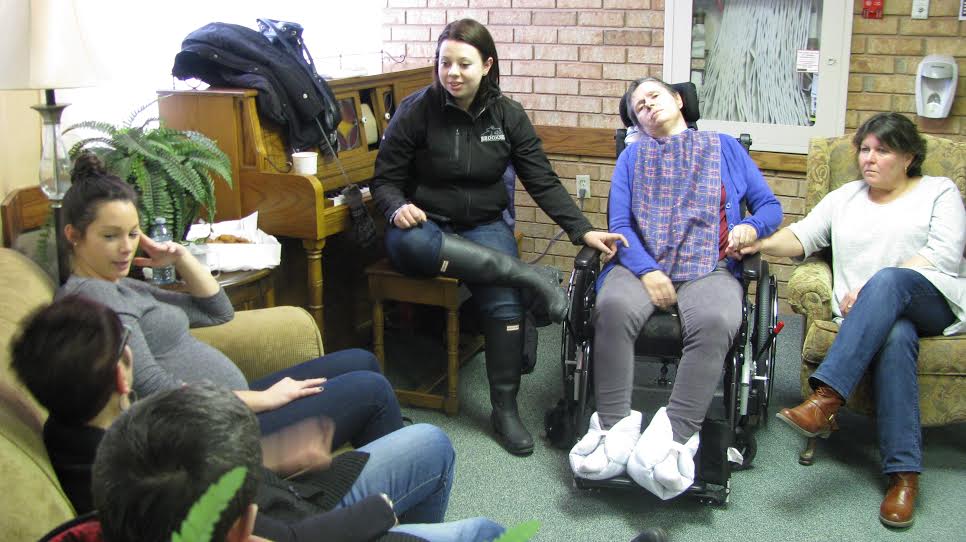 Alzheimer’s is a cognitive disease that destroys brain cells, and in effect, deteriorates memories beginning with short-term and slowly progressing to long-term memories. “Everything you’ve ever learned in your life, that’s what you lose,” explains Dr. JoAnne McLaurin, a professor at the University of Toronto who has been researching Alzheimer’s disease for about 20 years.

Alzheimer’s is most commonly seen in ages 65 and over, but can still happen earlier on in life.

“There are a lot of people who are afraid of the disease, and I don’t blame them. But some people are afraid, so they try to hide it for a long time. They use coping mechanisms, they know something’s wrong, but don’t actually go and deal with it. Peggy did that,” McLaurin squeezes her friend’s hand. Her face tenses as she squeezes back. “I know, I know. She’s getting mad. It’s okay.”

Peggy Dettmer was diagnosed with early onset Alzheimer’s disease seven years ago, and has been in long-term care for over two years, which had progressed from the assisted care she had been put in the year prior.

“We just knew going into college it wasn’t going to work that way, I wasn’t going to be able to do school and be a caretaker for her because we knew it was getting worse,” explains Peggy’s daughter, Erin Somerville. Peggy was diagnosed at the age of 52, the summer before her daughter started high school.

The warning signs were there that year. “It’s funny, because you don’t think of them until after they’re diagnosed, and then you start looking back and you’re like ‘oh that was weird.’ There were definitely some times where she said things that had no sense to them,” Somerville admits.

Long-time friend, Lorna Reed has known Peggy since they were babies. “Now this is probably one of the most meticulous people. Everything goes back exactly where it should be,” Reed says. “So when we were at the cottage Peg’s asking me, ‘where does this go? Is this yours? Is this mine?’ She had no idea where anything went, and I thought, that’s so not her.”

“We left there wondering if there was something wrong, but we had no idea, we just thought it could be anything but something like that,” Gremm adds.

“Well hindsight’s 20/20. We can sit here and tell you all these things, but when you’re going through it you don’t always jump to those conclusions.” McLaurin brings her hand back entwined with Peggy’s.

McLaurin says that five per cent of Alzheimer’s diagnoses are caused by a genetic mutation, while the other 95 per cent of cases are caused by sporadic, unknown factors. McLaurin and students in her laboratory at the University of Toronto’s Sunnybrook Research Institute have been exploring possible causes of this sporadic form of Alzheimer’s. McLaurin says that although these have not proven to cause Alzheimer’s, comorbidities such as diabetes and high blood pressure can increase the risk factor for the disease. 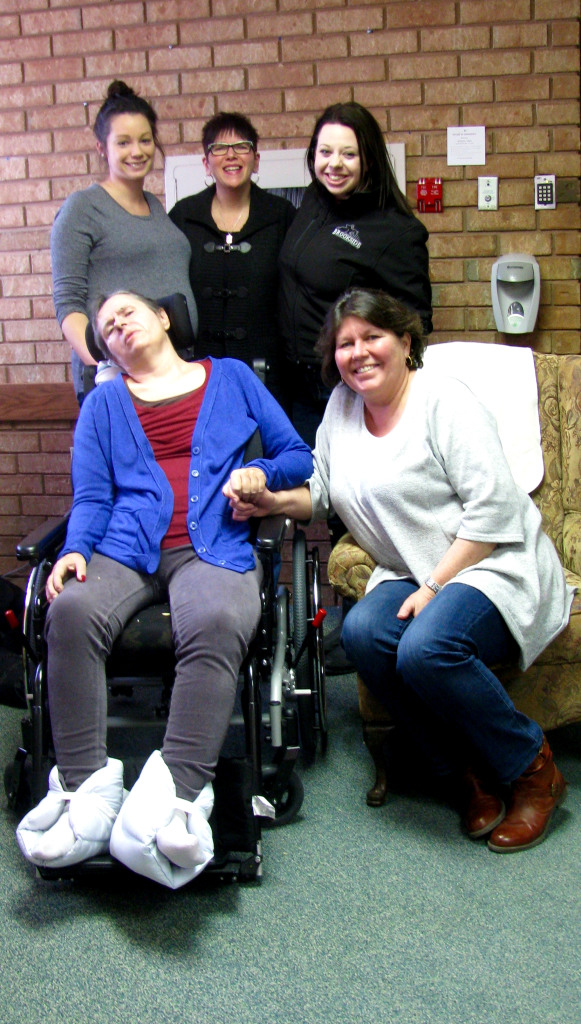 Peggy was a very outgoing woman. She travelled, skied, had annual pajama parties with her large circle of friends, and was quite lucky when trying her hand at the slot machines. One day she got herself $12 thousand in winnings, and surprised her friend Reed with a cruise trip. Peggy also loved to sun tan and shop with friends.

“For the first month, she was really upset over it and couldn’t understand the details. I mean, she had gone to school. A lot of my family was in denial saying, ‘there was no way she had that because she had degrees under degrees,’” Peggy’s daughter explains. “A lot of people said, ‘she’s too smart to have Alzheimer’s,’ but it didn’t really have any relevance right? You can get diagnosed at any time.”

For the first four years of Peggy’s diagnosis she was able to live on her own with the continuous support of her daughter, her two sisters and her mother. The symptoms began with everyday tasks such as making coffee or lunches, “she couldn’t figure out how many scoops to put in, or sandwiches, like, where does the bread go? Where does everything else go? It just takes everything and makes it complicated. So like simple things, that we look at like ‘that’s so easy,’ she would find a really difficult task,” explains Somerville.

The progression was slow. The remote control for the TV became a hassle to figure out, remembering how to get home from walks was impossible without the guidance of her dog Jasper, and finally stairs were no longer doable.

Peggy sits back in her wheelchair with her head tilted, eyes wandering, sometimes watering, searching the faces of her family and friends surrounding her.

“Hi honey,” Reed smooches her friend’s cheek but Peggy pulls back slightly. “What’s wrong baby?” Reed breaks off a piece of her homemade butter tart and Peggy immediately begins chewing as the piece is put to her mouth. Peggy has always loved Reed’s homemade butter tarts, sometimes eating them all up before her daughter even got home to have one.

“I think a lot of times people think Alzheimer’s is mostly just memory, like they’ll forget things, but obviously it’s so much more than that,” explains Anna Gremm as she rubs her belly. Come this spring-time, Gremm will have a new little girl and boy to meet their great aunt Peggy.

“I take every day with her as like a memory for me. I never try and take it for granted because I know that some people don’t have their mom, and I mean, as much as the disease is cruel and it did pick away at my mom, I still have her, maybe not mentally, but she’s still here,” says Somerville.

“Patience, understanding, I think the big one is everyone’s got to remember they’re still the same person they always were. Right Peg?” McLaurin smiles at her friend with Reed on Peggy’s other side, giving her hand a squeeze. Somerville grins from across the room, her boyfriend at her one side and cousin Gremm on the other. Sunshine beams across their faces as the scent of apple drifts from the box of fritters Somerville picked up from the Farmer’s Market on her way over. Chatter fills the room as if the player piano in front of the window were keeping the conversation in beat.

Erin Somerville and Anna Gremm will be doing the “walk for Alzheimer’s: make memories matter” at the end of the month, and want your help to reach their new goals. Visit support.alzheimer.ca and find their team “Sun Life Waterloo” by clicking “sponsor a walker” at the top of the page.