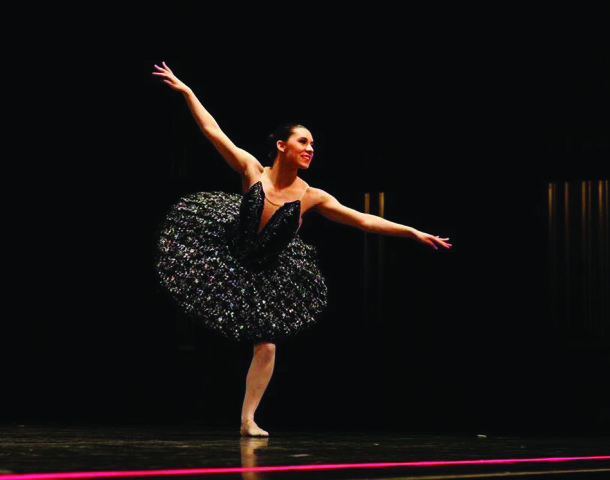 This 19 year-old Brantford native is taking the dance world by storm, having shared the stage with the likes of performers such as Avril Lavigne, Walk Off the Earth and, most recently, Janet Jackson. She has been shining onstage since before she can even remember.

“You could definitely tell that I liked it from the beginning,” Tamilia says of her early beginnings as a young dancer.

For Tamilia, dancing began as a hobby, but as her talent developed she began to realize it could become something more. “I started getting noticed more and more in [dance] conventions,” she says. “These top, well-known choreographers would call my name and they’d call me up onstage.” Soon after, she began booking jobs assisting at these conventions.

“I really loved it and I wanted to pursue it because I just felt it when I was dancing, you know? Felt that magic.”

At fourteen, Tamilia was awarded the title of Elite Protégé at the Pulse dance convention in New York City, a feat nearly unheard of for someone her age. She toured with the convention and was able to work one-on-one with renowned choreographers like Brian Friedman, whose past credits include Britney Spears, The X-Factor, America’s Got Talent and So You Think You Can Dance?

Her career took a hit, however, as a severe hamstring injury put her out of competition and on crutches for nearly six months. She emphasizes the fact that in a discipline like dance, “your body’s your instrument,” and any injury could be devastating. Fortunately, as Tamilia describes herself, she is “a pretty driven person,” and with hard work and perseverance, was eventually able to make a full recovery.

When asked about her favourite part of dance Tamilia explains, “I like … the stage aspect of it, because I love performing for an audience, and that’s like sharing your own talent with everyone.” She says that even from a young age, she never liked the competitive aspect as much as she loved, “being onstage and dancing for everyone.” For her, having the audience enjoy the performance is much more important than winning.

Tamilia’s talent has brought her across most of North America, and she fondly remembers her first trip to Los Angeles at the age of only nine-years-old: “L.A. is far, so I thought that was a big place for me when I was younger.” She has yet to travel overseas, but hopes to be able to dance in Europe at some point in the future.

Among her proudest achievements, Tamilia includes dancing backup for Avril Lavigne at the 2013 Much Music Video Awards, dancing for Walk Off the Earth at the 2015 MMVAs, and sharing the stage with Janet Jackson at her concert in Toronto this past September. She also mentions Monsters of Hip Hop, a Los Angeles dance show that she was a part of in 2014. “Paula Abdul came to that too, that was sweet. Nigel Lythgoe [of So You Think You Can Dance? Fame], Zendaya. A lot of big people came, and they were like ‘this is awesome!’”

During the past few months, Tamilia has been hard at work dancing professionally in multiple upcoming films, including a major unnamed project set for release in 2016 that she is very excited about.

Tamilia credits much of her success to her drive, strong work ethic, and positive personal philosophy, which she says she learned from the lessons and values instilled in her as a young dancer. “You can carry everything you learn into your everyday life.”

When asked what she would say to anyone considering taking dance lessons, she responds immediately with an enthusiastic “do it!”